On a candlestick chart, there is a pattern that technicians refer to as a doji. A doji has top and bottom shadows like a regular candlestick, but has practically no real body. This happens when the opening and closing price are the same, or so close that they just leave a sliver of a real body. A doji looks like a plus sign or cross.

Doji are considered a good sign of indecision in a market. Finding a doji with short and nearly identical shadow points suggests a neutral trading session. The market opened, had a small trading range, and then closed at the opening price. Neither bulls nor bears got the upper hand. Longer shadows show potentially greater indecision. They are neutral on their own, but paired with a trend, a doji can hint at a coming change.

Market participants looking for a reversal like to see Doji

Doji are like little battle scars of conflict. The trade had action but in the end no one won the day and the market closed pretty much where it started. If the market was on a bullish trend, this could be a signal that the bears were coming in. The opposite could be deduced if the market was in a bearish trend.

A technician’s reversal argument is simple. If the dominant trend were still in control, there wouldn’t have been a wrestling match for control. And there would have been a clear winner. Instead, the real body showed that the day was almost a wash. 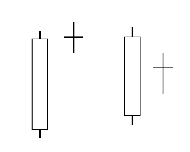 Simple doji to look out for:

Long hollow or green candles followed by a doji. An uptrend could be nearing its end if a doji reveals selling pressure. Look for confirmation from additional downside action. (pictured top right) 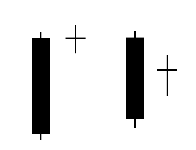 Long filled or red candles followed by a doji. Any downside action followed by a doji could mean buyers are coming in or selling pressure is abating. Watch for upside confirmation after this kind of formation. (pictured top left)

There are also a few special doji to watch for. Some form patterns with fantastic names like abandoned baby, morning star, evening star, and tri-star. Two worth mentioning are the dragonfly doji and gravestone doji. These are unique in that the real body is at the top or bottom of a long shadow. 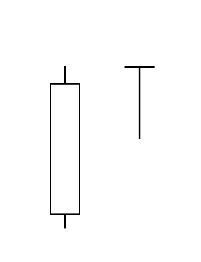 A dragonfly marks a session where the open, high, and close are all the same and the low forms a long lower shadow. This can be a sign that sellers were in charge for the trading session, but at the end of it, buyers came back. A dragonfly can indicate a bullish reversal in a downtrend or a bearish reversal in an uptrend. (pictured bottom right) 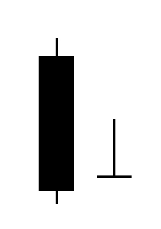 A gravestone comes when the open, low, and close are all the same and the high makes a long upper shadow. This can happen when buyers are in the driver’s seat for the trading period but sellers come back at the end. Just like the dragonfly, the gravestone’s potential for indicating a reversal will depend on the prevailing trend. (pictured bottom left)

Both patterns need to be seen as part of a bigger picture. Look for confirmation after they occur.

Doji are candlestick patterns that can show a significant wrestling match is in the works. Neither the bull nor the bear are dominating the trading period. This means that you have to look at the whole chart – not just a single candlestick – to confirm the potential in a doji. What you are looking for is something that will tip the scales, a sign that someone will take the advantage. I look at doji as yellow flags during any trend. Tread carefully until the bigger picture is revealed.

Best Trades to you,

Disclaimer: Trading in futures and options involves a substantial degree of a risk of loss and is not suitable for all investors. Past performance is not necessarily indicative of future results.