Economic models and analysis that rely on the consistent application of fewer indicators often yield better and clearer forecasts.

Unfortunately, most of today’s market “experts” have apparently never heard of that concept.

And the financial media love to hype any of the hundreds of economic data reports that are released every week.

All of these indicators never point in the same direction at the same time, so if you try to follow them all, it can lead to confusion, frustration and some really bad investment decisions.

Let me show you a smarter way to cut through the static and get to the truth about the economy and what lies ahead for the market.

A Day Late and A Dollar Short

The best way to avoid falling into these traps is to identify and follow a set of indicators or data points that have a reasonable track record of success.

This graph tracks the year-over-year change in LEI going back to 1960. The official start and end dates for every U.S. recession since 1960 are shaded. 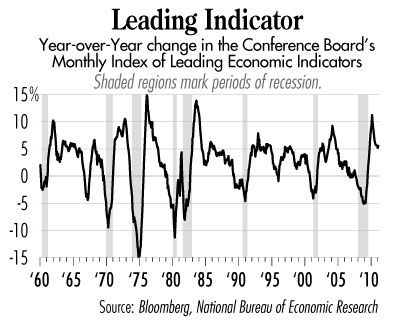 The Business Cycle Dating Committee (BDC) of the National Bureau of Economic Research (NBER) is the accepted official arbiter of the beginning and end of US business cycles.

But the business cycle dates provided by NBER aren’t particularly useful for investors, save for historical purposes.

It wasn’t until December 2008 that the NBER established that the most recent recession started in December 2007.   Then, in late September 2010, the NBER finally declared that this recession had ended in June 2009.

Not exactly the type of advance notice that you need to profit and protect yourself.

But those of us who follow LEI DO typically get an advance warning. As you can see in “Leading Indicator,” the year-over-year change in LEI has turned negative before every recession since 1960.

In the most recent cycle, LEI flashed recession in October 2007, two months before the downturn started. At that time, many economists and market pundits—armed with more complex models—forecasted only a short-term slowdown or a shallow recession.

In July 2009, when many pundits called for continued weakness and the potential for a second financial crisis, LEI turned positive, indicating the recession had ended. Investors who followed these signals would have avoided being overly invested in 2008 and early 2009, one of the worst periods for U.S. stocks in market history.

And those who saw the signal to buy in summer 2009—as I did—participated in one of the most dramatic rallies in the past century.

Learn more about the leading economic indicators we use to stay one step ahead of the market and get free instant access to my three newest Special Reports here.