The 30 year / 2 year Treasury yield curve has been on a steady march higher since 2007.  This makes sense since that was the year things started falling apart in inflated, debt saturated developed global economies, led by the nation that showed 'em how it's done when it comes to economic management by inflation; the US.

When long term yields are rising faster than short term yields, it is a sign of stress building toward either a breakout in inflation expectations or, as has been the case thus far since 2007 (and really, since the age of Inflation onDemand began in 2001), impending reversal of the excesses.  Unfortunately, in an age where economies are managed by inflation (by monetization of Treasury/Sovereign debt in service to increasing money supplies) these reversals tend to be shall we say, violent. 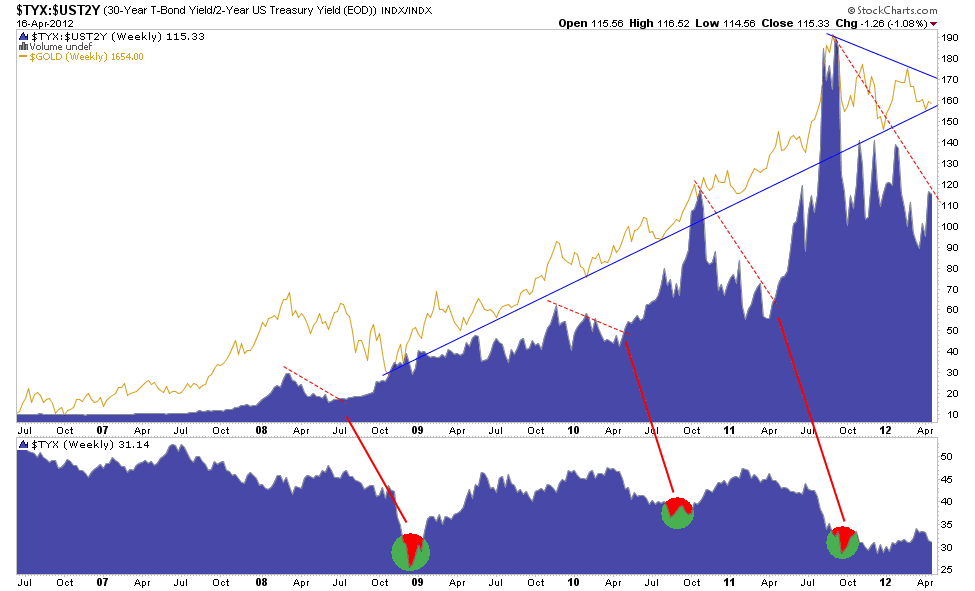 Without conjuring too much theory about the Treasury bond market's yield relationships, let's just say that a rising curve (top panel) has accompanied ever higher moral hazards being baked into the macro cake.  As shown, the monetary value anchor, gold, has moved up right along with the curve.  But like the curve itself since the Euro ignited blow off in 2011, Au has been mired in an intermediate down trend.  It all makes sense, at least when comparing the yield curve with the monetary relic which has not yet by the way, broken down from what still qualifies as a Symmetrical Triangle, which is usually a bullish pattern.

But enough on gold, it will go up or it will go down in the short term.  What we are interested in today is what the yield curve in the top panel may be indicating for the nominal 30 year yield in the lower panel and from there, what the nominal yield may forecast.

Very clearly, when the curve has increased and then played out a consolidation/correction (red dotted lines) as it is now doing,  a decline in nominal 30 year yields and a deflationary and/or crisis episode has played out each time within a few months.  The 2008 decline in the curve forecast 'Armageddon 08', centered in the US (this was the 'lever' to QE1), the 2010 decline forecast the 'Flash Crash' and associated liquidity

problems (this was the 'lever' to QE2) and the decline in 2011 forecast the phase where Europe's sovereign debt structure began to come apart at the seams (this was the lever to the ECB's version of QE as its balance sheet was expanded to deal with the crisis, while the US financial media got to pretend it was Europe's problem and if not for that all would be fine).

Well, the yield curve has been in decline since the acute phase of the Euro crisis and its correction has been exacerbated by the Fed's stated intention of selling short term T bonds and buying up long ones.  This has painted 'Goldilocks' into the picture, pressured the precious metals and commodities, and given the stock market a reason to bull without those nasty inflation concerns that tend to make the Fed's policy makers sensitive to criticism.

But we have another red dotted line indicating a correction/consolidation on the chart.  Is it different this time or is the curve again forecasting that a deflationary 'issue' will be cropping up later in 2012?  Taking it further, would it not be a convenient excuse for Dear (monetary) Leader to come to the rescue once again?

We have been following the RPG (real price of gold) and other macro 'tools' closely and they have not yet given a signal as to sufficient pressure for coming QE-style inflationary policy.  But the picture above says that in this election year, it could be coming soon if previous relationships prove valid in the current situation.  Considering how low nominal yields are already, what kind of policy response would you think might meet a deflationary episode?  I think it could be a decisive one.

Then again, maybe this time it will be different.