That whistling sound every investor heard on Wednesday morning was the sound of stocks in freefall after the Obama election victory.

Morgan Stanley took the biggest hit with a loss of 8%. Bank of America was off more than 6%, and JPM Morgan came in at the top of the heap with a 5% decline.

For those who hate “Obamacare” there was little joy as dawn broke after the election.

Insurance companies which had been hoping for a break on some tough regulations followed finance companies into the pit of despair. Although they can expect to enlist more patients in their programs, they won’t be able to weed out high-risk patients. That could mean huge costs among patients with pre-existing conditions.

In addition, new taxes will be applied, not just to managed care, but to all slices of the health care world to help pay for Obamacare.

Also facing profit limits, the big names in health insurance took it on the chin.

Humana took the biggest hit with a loss of 8%. United Health Care and Aetna took a considerable pounding with a 4% one-day loss. Cigna got off easy, coming out nearly even.

Insurers will also face new competition from all 50 states. They have nine days to advise the federal government how they plan to manage state-run exchanges created by the Obama law to provide medical coverage to the uninsured.

If they refuse, states face a de facto U.S. government takeover of their insurance markets.

Before the election all but 13 governors decided to do nothing, apparently expecting a Romney win. If they don’t act fast, America could effectively wind up with a federal health insurance company in all but 13 states.

AND THE WINNER IS

Hospital Holdings Inc. (HCA) used to be known as Hospital Corporation of America. It was a HUGE one-day winner with a gain of more than 10%! 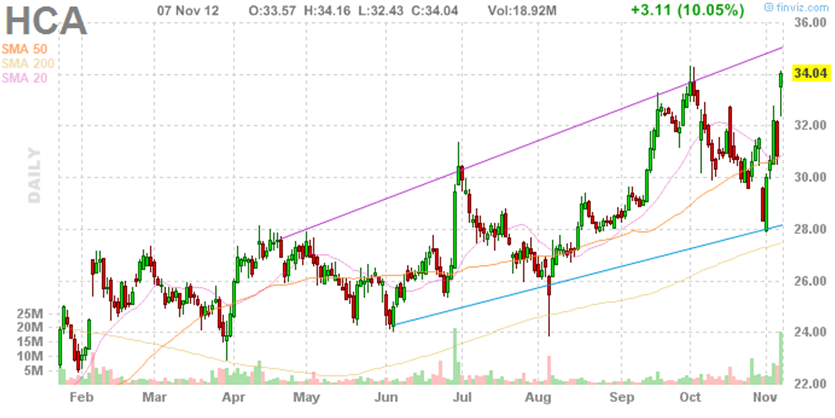 Other gainers included Tenet Healthcare which made a similar move, up 10%. Health Management Associates gained more than 7% and Community Health Systems rose by more than 6%.

Why are hospital investors high on Obamacare?

Industry executives say they expect to get a lot more customers as previously uninsured people seek care that they just couldn’t afford previously.

The change in patient volume could be huge for hospitals. Obamacare will extend health-care coverage to as many as 30 million uninsured people starting in 2014.

As one enthusiastic industry analyst told Bloomberg, “Volumes of business will improve for hospital companies and bad debt will go down with the reduction in the uninsured as the law moves forward.”

Even some insurers are on the positive side of this trend.

The burden on big health insurance companies is truly heavy. Obamacare bans insurance plans from keeping more than 85% of the premiums they collect for profit or administrative expenses. It also imposes about $84 billion in taxes and fees, according to some estimates.

But Medicaid and Medicare insurers will do just fine. Shares are rising for companies that focus largely on Medicaid, the joint state-federal program for the poor.

The winners in this group are Centene (CNC) which climbed 10% as well as WellCare Health Plans (WCG) which rose 4% and Molina Healthcare (MOH) which enjoyed a similar boost.

The health law includes an expansion of the system and these companies are expected to gain from the growth of the system.

On a day of market losses, I’m very pleased to have the biggest winner, HCA, already in our Consensus Picks portfolio!

Good luck this week and as always, please feel free to post your comments below. Also, please keep in mind that Wealthpire is giving investors access to new software that picks winning stocks up to 92.75% of the time. Learn how you can use this ultra-accurate stock-picking software that legally "spies" on the world's top stock-picking services. Get the full report at http://www.ConsensusPicks.com.

Thank you for your interest,

7 thoughts on “Guess Who's Cashing in on Obama”