A subscriber forwarded to me an audio of Don Coxe talking about the changes coming out of Global Policy Central in “Basel Greenlights Banks Big Time” and it turned out to be a good starter for a post in which I would like to try to delineate some things.

You may have heard me belly ache in the past about the raving inflation bulls who lump gold and gold stocks in with the entire inflation trade?  Gold is copper is oil is hogs?

No, gold is counter cyclical in its relative strength to these other things.  Ironically, when gold is being out performed by silver and a whole host of commodities in an inflationary phase, it can rise (sometimes handsomely) in nominal terms but its producers will suffer.

In that event the fundamental case for the gold mining sector goes right out the window.  When the gold stocks crashed in 2008, they deserved that crash to reset what had been years of rising despite degrading fundamentals as gold under performed mining cost-input commodities. 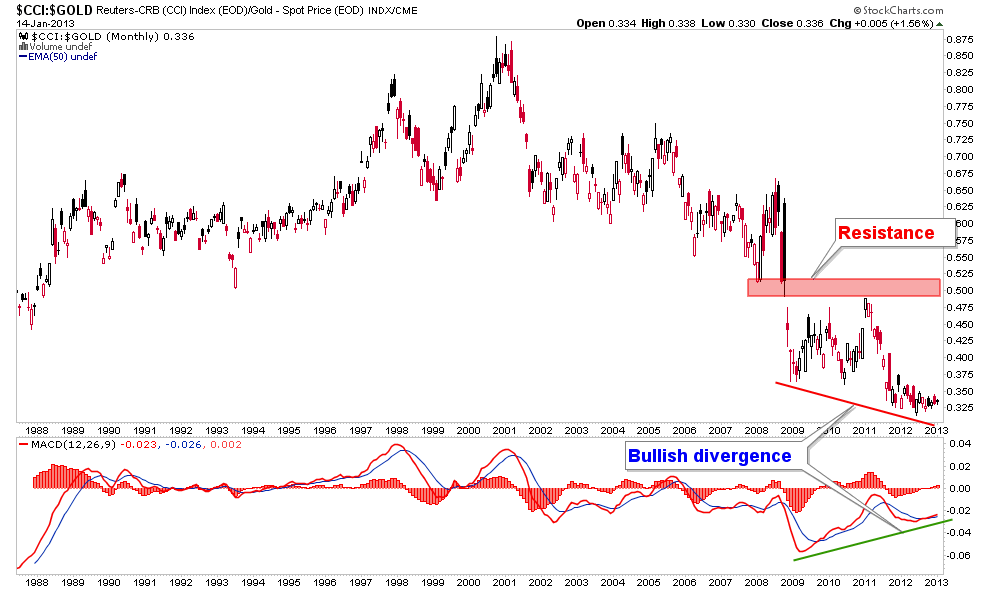 If as Mr. Coxe believes the global economy is going to benefit in the near term from the inflationary policies being set forth in the US, Europe, China and now likely Japan, then the bullish divergence in the chart above (CCI-Gold ratio) would likely result in a rise in the ratio, which means that gold’s ‘real’ price would decline.  Taking it further, that means that any gold miner rally along with the inflationary upside would ultimately be a trade only.

It is a weird irony with this sector that some of its best rallies happen amid degrading fundamentals and some of its toughest times go along with improving fundamentals.  The gold miners have spent the last two years getting to a fundamental place that is probably about as good as it’s going to get if CCI-Gold is indeed about to rise.  Be aware of that and consider it an intermediate ‘trade’ only even (or especially) if things get really bullish.

For my part, the model portfolio is and has been participating in a global way in Asia, emerging markets and across various commodities.  This along with some precious metals exposure, global income and the safest US short-term debt instruments.

I believe there is a shelf-life for any inflationary upside to come and said shelf-life may be as long as it would take CCI-Gold to rebound to the noted resistance level on the chart above.  Mr. Coxe is right that in that event there would literally be a world of places and things to invest in as a sea of liquidity lifts the best (and even some of the worst) boats.

So there is no difference here in biiwii land.  We will continue to watch the base money supplies and continue to twittle our ratio charts to make sure we are on top of the nature of this process every step of the way.  If the inflationists (here I mean global policy makers) are successful in the near term, the thing will bust again one day into the next crisis.  That is what happens during systemic and chronic inflationary regimes.

At such time the real price of gold would probably be ready to rise again into the next economic contraction.  But for now, we’ll continue on managing what I have thought for some time now might be an oncoming inflationary phase. 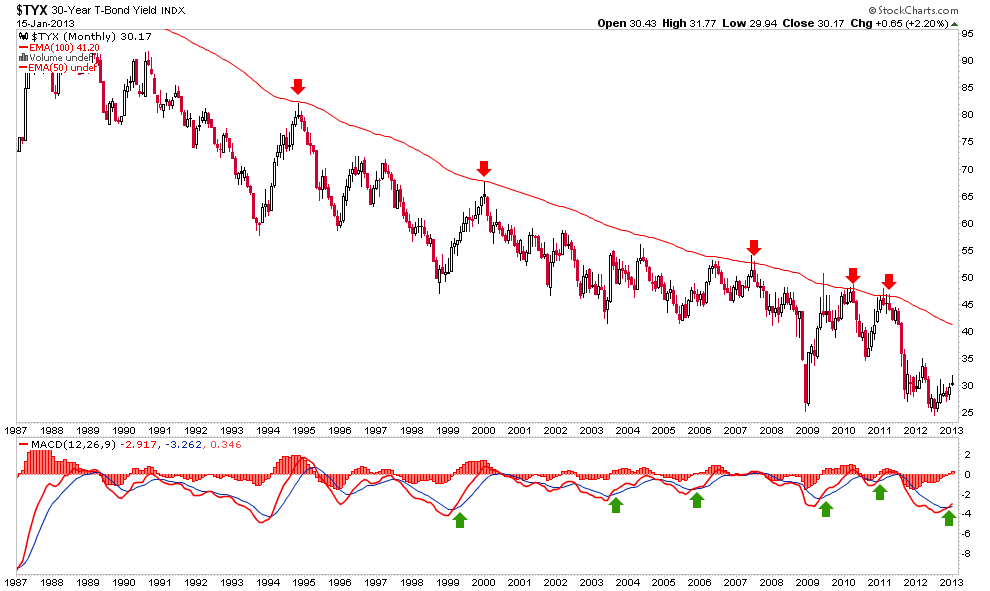 The yield on the 30 year bond seems to agree that the first half of 2013 could be ‘inflationary up’ as the monthly MACD usually does not trigger unless it means business.  Just be prepared for the next time the inflation alarm bells are ringing if and when the yield gets to the red line (monthly EMA 100).

Meanwhile it could be party on Garth, party on you and party on me.  But you and me should keep perspective at all times.

3 thoughts on “CCI-Gold Ratio Will Tell the Story”