As human beings we try to intellectualize and get to the bottom of things.  We seek to find meaning in everything.  There must be a reason for what is happening at any given time.

Take for example the Dow’s stellar performance and gold’s lousy performance even as monetary policy has gone reckless on a global scale.  This goes against everything that humans who deal with the financial markets think they know.  But what if we are just getting back into symmetry? 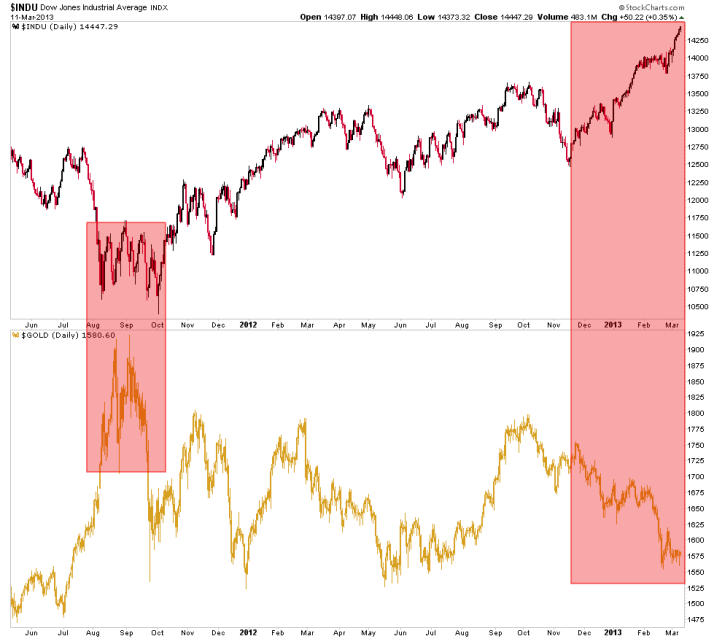 Money flew out of global stock markets in 2011 and it just knee-jerked into gold in a dangerous way that distorted the investment profile of the barbarous relic that is nothing more than an anchor to monetary value.  What has happened since 2011 is fixing this distortion.  What is so hard to understand about this?

The Dow, now negatively correlated to gold, is currently becoming distorted with a high proportion of dumb money aggregates while gold is left for dead by the dumb money (public, momentum speculators, etc.).

The inflation being promoted by our Dear (Monetary) Leader (DML) here in the US and similar DML’s in Europe and Japan is coming into the system.  Inflation is always destructive in some way, whether by gradual and insidious rising prices or by inflated bubbles that pop and resolve into deflationary fallout.

Contrary to the new analytical cult I have seen cropping up out there about a grand new bull era in the USA, might we not consider that it is just US stocks’ turn to suck in the bid?  Gold was still working off the excess and thus was not a viable play in the global casino.  It was not yet ready and there sat the Dow, at the November lows in response to the anticipated Fiscal Cliff drama, just waiting for a knee jerk relief bid.

It got it and things are coming into symmetry once again.  Gold is much healthier than it was in 2011 and the Dow is much more risky than it was in November.

NFTRH has been in alignment with the rhythms and symmetry in financial markets since its launch right into the teeth of the 2008 global asset market crash.  Good times.  Check it out on a monthly basis (cancel any time if it is not for you) and you just might find an effective vehicle for managing the market’s interim swings with risk management and a capitalist’s greed, each only as appropriate.