I wrote a couple weeks ago about whether we're seeing the end of the oil supercycle. In my article, I heavily referenced a money management firm (WHV Investments) that has been bullish on energy investments since predicting a “supercycle” in 2000 (great call at the time!). Despite the massive turmoil since last June, WHV continues to be bullish.

To get a flavor for stocks owned by a manager who is bullish on the continuation of the energy supercycle, check out this partial list of WHVIX's stock holdings. Granted, the holdings data are a few weeks old, but WHV tends to have very low turnover and says it’s sticking with its thesis. WHV management believes we’re still in the oil supercycle; accordingly, WHVIX owns stocks like these (as of 12/31/2014, source: WHV.com; this list represents selected stocks rather than a complete Top 10 list): 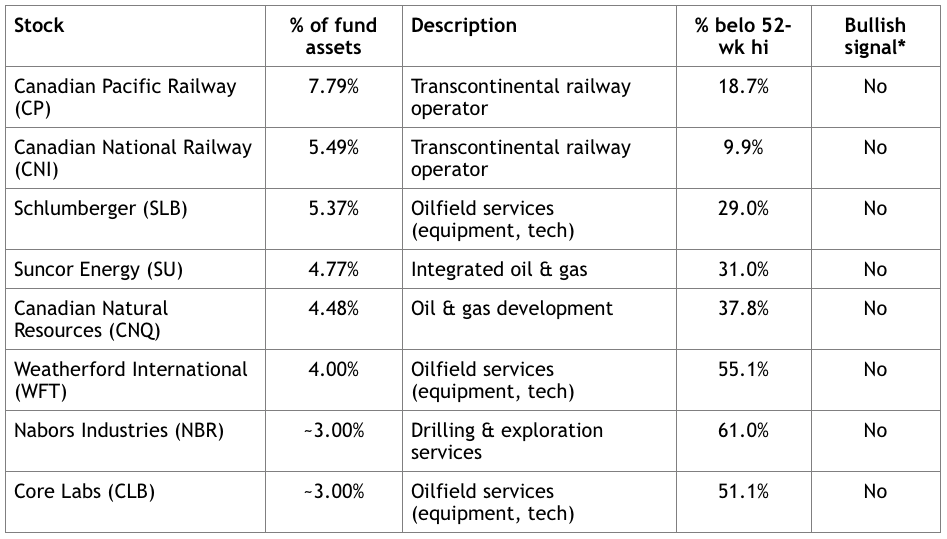 * “Bullish signal” refers to whether MarketClub is displaying “green triangles” for both the intermediate - and long-term outlook.

Of the above holdings, WHVIX appears to have (during 4Q 2014) increased its exposure to Suncor, which derives a large plurality of its business from “downstream” refining and marketing activities. Additionally, Suncor has significant development efforts in Canada’s Athabasca oil sands.

Note, WHVIX is neither an energy-only nor a natural resources mutual fund. Rather, it's an international equity fund that happens to have adopted a “high-conviction” oil supercycle thesis that's very heavy on 3 sectors: energy, materials, and industrials. The fund's management believes a major driver of the global economy for many years will continue to be the “2nd industrial revolution,” including massive infrastructure build-out in emerging countries.

Even after the drubbing of the last 7+ months, WHVIX's assets are still over 70% allocated to those 3 sectors, which amounts to almost 3x the comparable allocation of its primary benchmark, the MSCI EAFE index. The fund – mercifully – also has a healthy allocation to consumer staples, as well as a sprinkling of health care stocks… plus almost 9% in cash.

In its 4th Quarter 2014 commentary (hot off the presses), WHV managers reaffirmed their view of the oil supercycle, by writing this:

“Our current sector positioning reflects our view that industrialization, urbanization and infrastructure modernization in the developing world will create demand for energy and materials that global suppliers will be challenged to meet.”

Management continued in a special “Portfolio Manager’s Letter” to shareholders:

“The WHV International Equity team believes that current oil prices are unsustainably low and that stronger demand ahead will once again shine a light on the supply challenges that face the industry.”

Today, I'll introduce you to a T. Rowe Price natural resource fund manager who says the oil supercycle ended circa April 2011, and that the new secular bear market is likely to last another decade or so.

Oh, and one other thing about this manager: he’s on record calling for $50 oil when brent crude was trading at about $80 – even before the pre-Thanksgiving OPEC announcement that accelerated oil’s nosedive (sources: MarketWatch articles by Howard Gold, 11/14/2014 and 1/27/2015).

Shawn Driscoll is the relatively new manager of the T. Rowe Price New Era Fund (PRNEX), serving in the role since 9/30/2013. By his own admission, Driscoll actually didn’t intend to call for oil prices hitting $50 this quickly. Rather, his “call” referred to his belief that oil is likely to remain in the $50-70 range for another decade or so. Fortuitously, he happened to publish that analysis in his fund’s semi-annual report dated June 30, 2014. Nice timing, Mr. Driscoll!

So what does Driscoll believe now? According to Howard Gold's article today, “If crude falls below $40, Driscoll said, ‘I don't think we’ll spend a long time there; I think the normal oil price will be around $60-$70.’”

All right, then. So, if you're managing a fund that invests, by prospectus, in natural resources stocks, and you believe oil prices will stagnate at low levels for the next several years, what do you do?

* “Bullish signal” refers to whether MarketClub is displaying “green triangles” for both the intermediate- and long-term outlook.

** PXD doesn’t yet have 2 “green triangles,” but check out the chart. It’s starting to look constructive. Also, Driscoll appears to have added to his PXD position during 4Q 2014. Similarly, CXO is looking particularly constructive.

Driscoll writes in his 9/30/2014 commentary: “We are also looking at commodity-related companies whose input costs are declining while product sales are increasing, including utilities and specialty chemicals.”

What happens after a big oil crash?

In my next article, I’ll continue this ongoing look at what’s coming next for energy investments.