Today is surely Swiss National Bank’s day after it abandoned the cap for EUR/CHF cross which was introduced in September 2011. Swiss franc surged for a record against everything that can be traded. What are the first associations when we are thinking about Switzerland? Yes, first is gold, then luxury watches and of course chocolate. This country has had the gold of the world stored in its banking vaults and a safe currency, but now the Central Bank is nervous because of the currency’s excessive appreciation. So today’s shocking Swiss franc move inspired me to compare both instruments boasting a safe status. 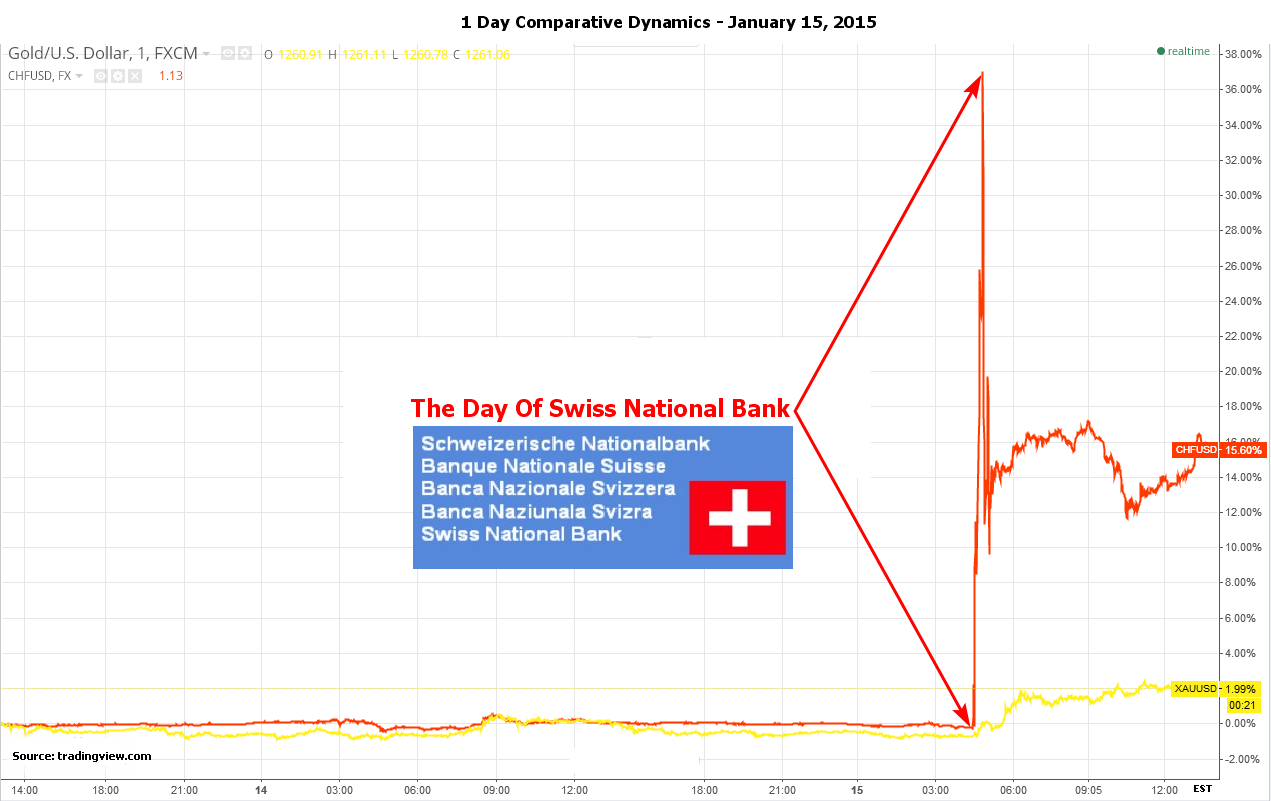 Just after the SNB announcement, the market lost its liquidity as everyone was shocked by such an unforeseen move (recently SNB spokesman declared that currency stability is a key element of their policy) and the franc flew to 37% gain level at once. Gold also started to elevate, but the move was comparatively moderate. At the moment (2 pm EST), the 1 day growth is almost 2%. The franc stopped soaring and calmed down to almost a 16% gain. Just to show the difference, when SNB introduced its peg in 2011, the Franc devalued. It showed a relatively modest 9% immediately after the announcement. So this time it was a real shock for the market.

To understand the comparative power of gold against the franc, I will be adding more time frame-charts with longer periods.
Next is the 1 year relative dynamics of the two instruments. 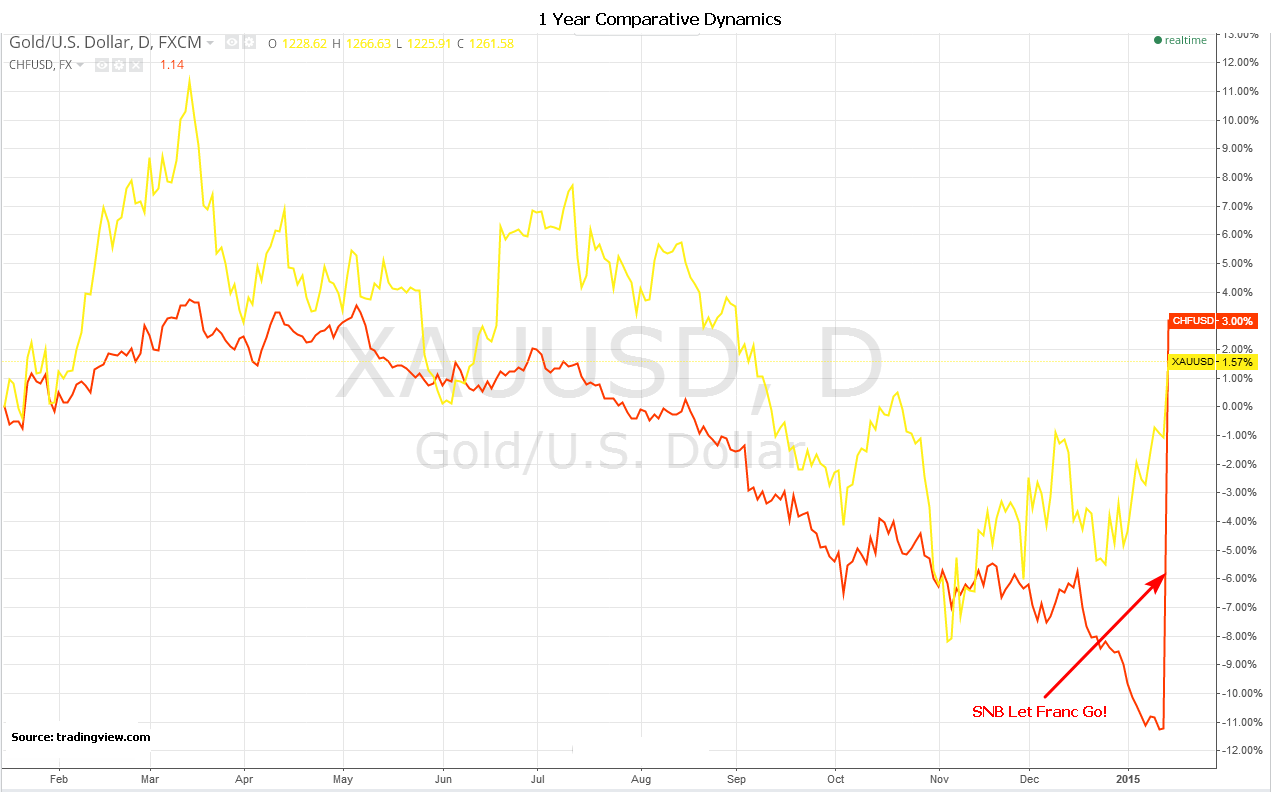 In the meantime, both gold and the franc on a 1-day and 1-year graph are moving in the same direction with more volatility in gold. Only at the end of 2014, gold started to diverge rising against dollar while the franc continued its fall. Today, SNB returned power to the franc. 1 year summary – franc gaining 3%, rocketing it from -11%. Gold is making 1.57% which also reversed from negative territory. 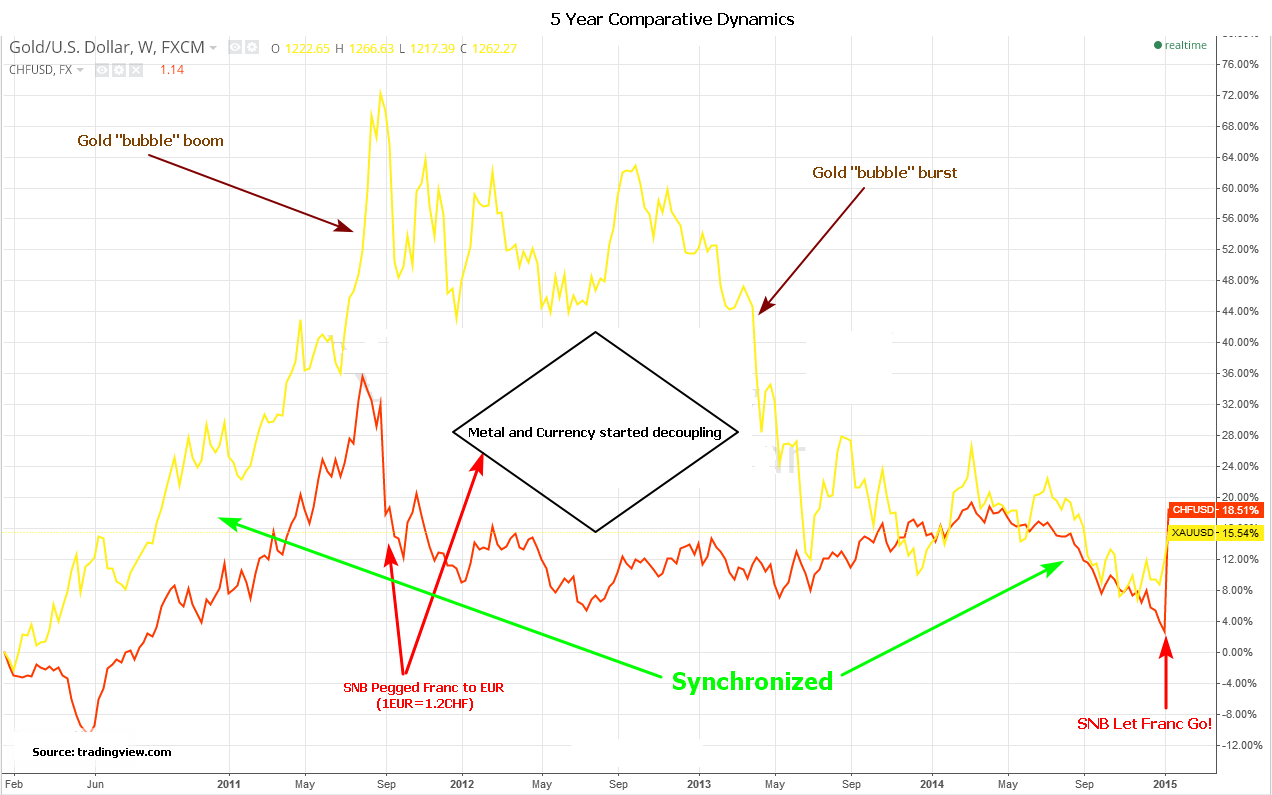 Here we can see why gold and CHF are usually put together when one mentions safety. They move head to head (highlighted with green arrows) for years. But I want you to focus on another interesting behavior. I highlighted with red arrows and the black rhombus the time when SNB launched its peg for EUR/CHF (it immediately affected the USD/CHF). Right after that, both instruments started to diverge: gold continued in an uptrend and CHF, on contrary, lost the 1 year gain. This artificial intervention in the market was clearly depicted by the price on the chart. And this is not the last interesting thing. If we will look closely to the gold trend, the natural move would be stalled at $1500-1700 level. The market would then fall back to new normal $1000-1200 level. Instead, the trend became steeper and the price soared beyond $1900 and then fell back to a normal curve at $1500-1700. Gold, more than franc, tends to inflate “bubbles” which burst from time to time. And right after such burst, these two safe havens met on the graph again. But to answer our title question, 5 years is not enough as both showed close results just below a 20% gain.

Below is this century’s chart of dynamics for past 15 years (from December 1999). 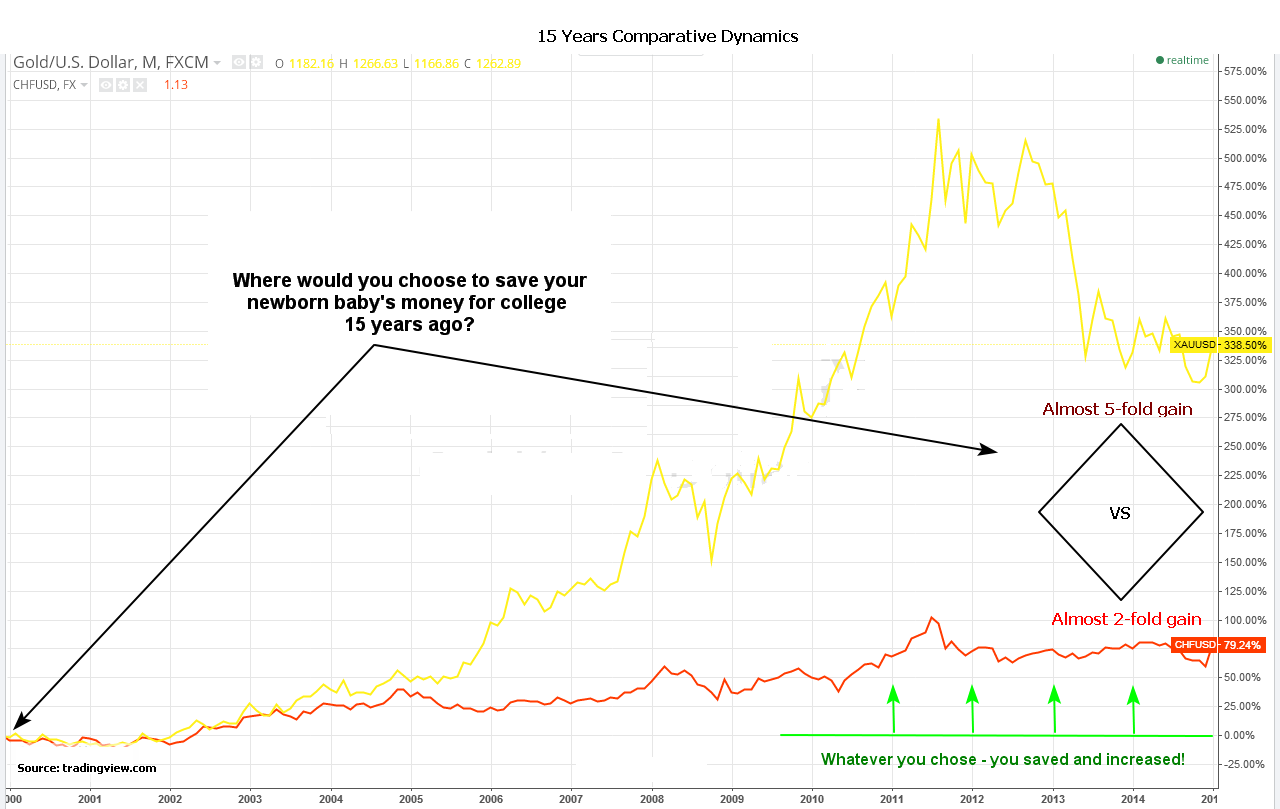 I bet now it’s clear which one is saving your money the most. Gold is the winner. If you were wise enough, or not so greedy to cover longs in 2011-2012, you could have gained more than 6-fold on your investment. Even these days you would still be making decent 338% gain. Franc just made 80%, a laughable return if compared to gold. From 2002, both managed to be in green all the way up to date and therefore this couple confirmed its safety status.