Long ago, Gold was an exchange medium and one of the very first hard currencies. In this post, I will show you YTD results of the competition between this former currency and the top 7 modern currencies. I selected the US dollar first, and the others are 6 components of US dollar index placed by weight: EUR, JPY, GBP, CAD, SEK and CHF. I bet some of you never even thought about such currency crosses for Gold. 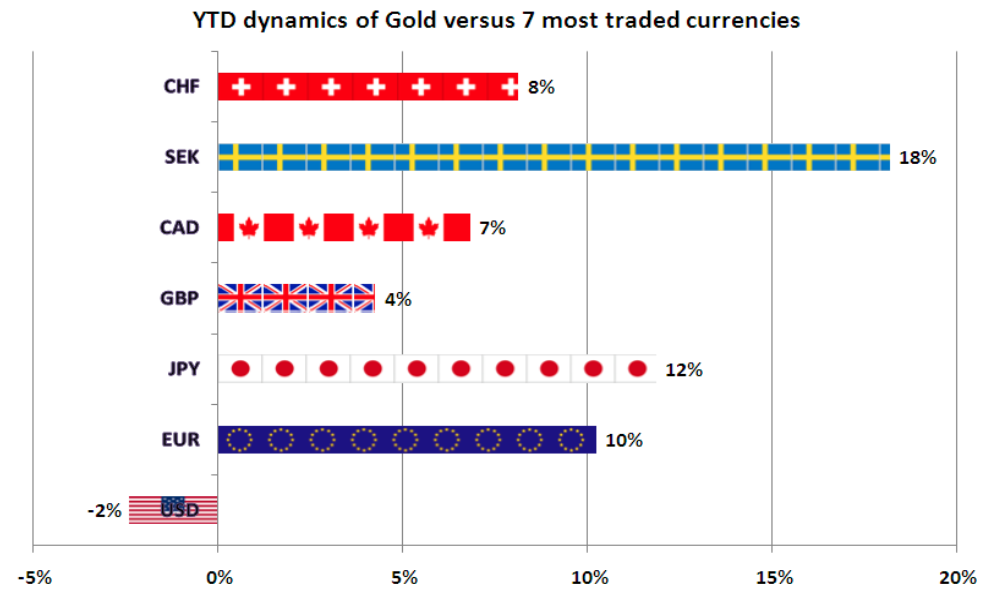 On the above diagram, you’ll see DXY components in different extents. They lost their value against Gold and only the 'king currency' managed to survive and even gain a small profit. So the winner is US dollar and the top loser is Swedish krona, the net difference between them is 20%, impressive!

On the chart below, I put the winner and the top loser into separate comparison chart to show where we lost the krona. Both currencies started the year in red and the depreciation was dramatic: the dollar lost almost 15 % in Q1 outpacing the krona which lost only 12%. In Q2, the USD caught up with krona when they were gaining some loses back. Trends were equal. The middle of the year brought decoupling for these Gold crosses and clearly this is when the shift between them happened. The final breach of correlation came this December when Gold lost quite a lot to the USD while it was stable against krona at the year highs. The krona, like other European currencies, suffers from rate cuts (the last rate cut was to record low at 0%) and fragile economy edging on deflation risk danger. 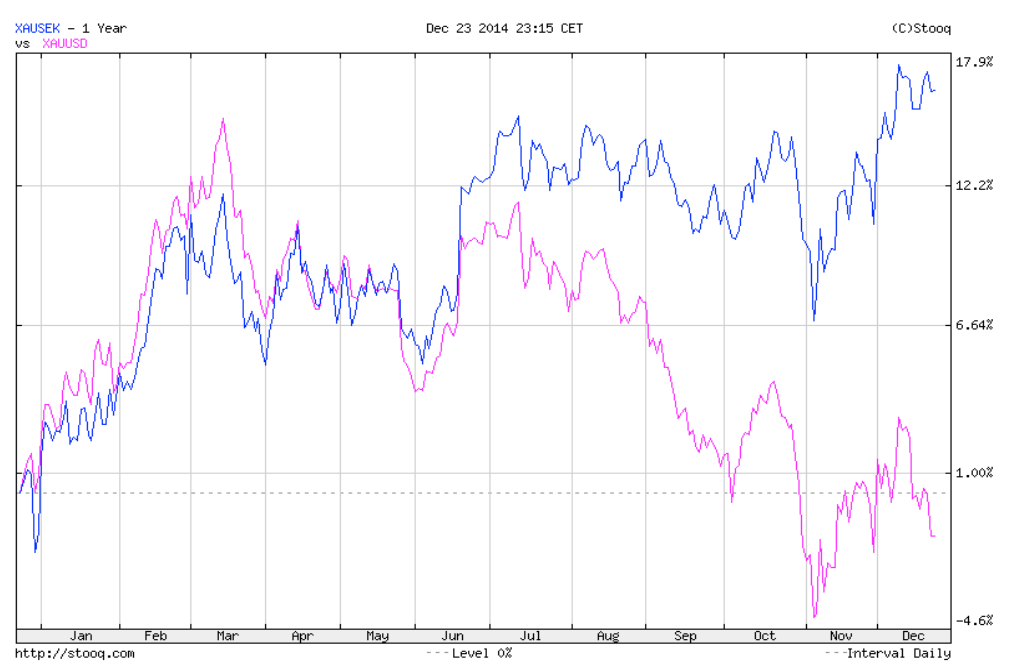 For a detailed view, it is better to watch Gold pairs on separate charts. Let’s skip to Swedish krona as the winning pair of Gold versus US dollar was already analyzed in my first December post. 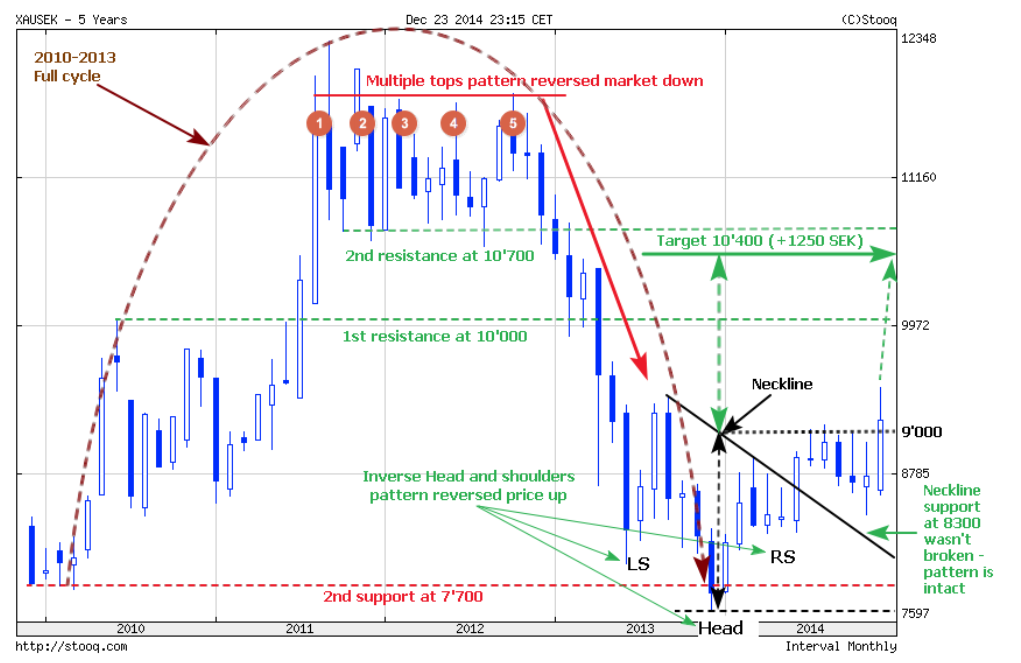 On the candle chart above is a monthly view for Gold versus Swedish krona which covers last 5 years. I should admit that this exotic Gold cross is very interesting from technical analysis point of view. As you can see, it usually has a clear trend and by adding to this one, you can find exotic and common chart patterns here.

XAU/SEK went through a full 3-year cycle (2010-2013), highlighted by the brown dashed arrow, where the price grew and fell back to the start point at 7700. The krona lost almost half of its value against Gold at the top of the cycle in 2011. And there the bears started to hold the Gold from further gains, shaping a quite exotic chart pattern called Multiple tops. Here we can count 5 tops. The pattern reversed, and the bears succeeded to push the price below the important support at 10700. Thereafter, Gold quickly lost all of the impressive gains and plunged even below 7700; so strong was the downward impulse.

Again, we have another rare chart pattern on the graph. It’s called the Inverse Head and Shoulders Pattern., I highlighted both shoulders, LS - for Left Shoulder and RS – for Right Shoulder and between them is the Head. The pattern, like previous one, is also a reversal and it’s quite natural to have it here as the cycle ended and market chose a new direction. Maybe this pattern is the threshold for the new cycle and we will see a repeat of the previous move.

To calculate future target for this pattern, we should find the vertical height of the Head (90 degree distance between the bottom of the Head and the Neckline highlighted by black dashed vertical line) which is almost 1400 SEK (9000 minus 7597) and measure the equal distance above the neckline drawn by green dashed line. So we got 9000 as Neckline point and we should just add 1400 and the target is 10400 for this pattern, pretty nice gain, almost 1250 SEK for each ounce of Gold from current level or 14%! Just keep in mind 2 figures: 1st is 8300 – Neckline support, below it the pattern turns void and 2nd is 10000 – former Multiple Tops support strong resistance located at important psychological level.

7 thoughts on “Gold Versus Top Currencies! And The Winner Is….”