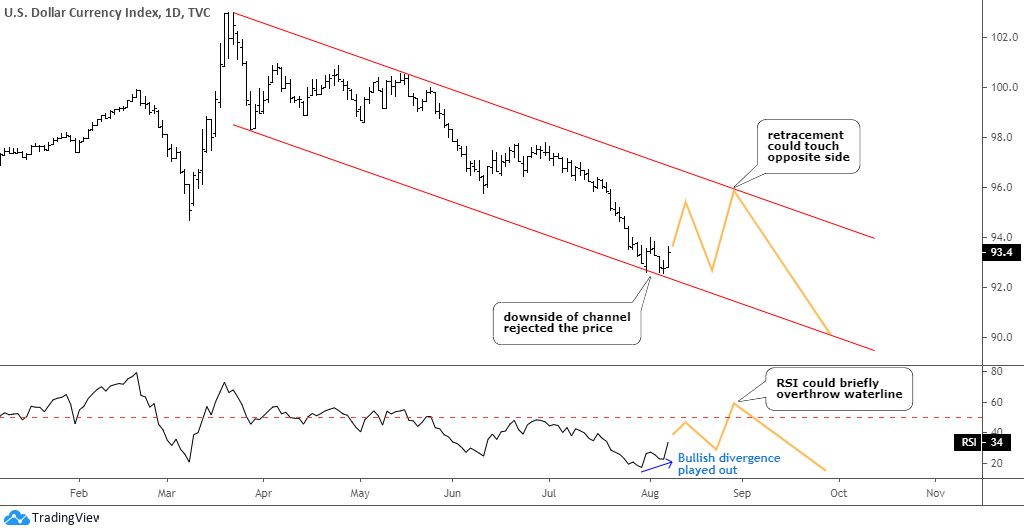 The other move was very sharp to the downside within two equal zigzags pushing the price from 100.9 to 92.5. The DXY was oversold, and now it could enter the retracement stage to let traders book some profit covering shorts, and contrarian traders might enter longs here playing on the trendline rejection. The price could touch the opposite side of the trend channel around 96 as this could be not a minor, but a large corrective structure as we saw such last time only this April. END_OF_DOCUMENT_TOKEN_TO_BE_REPLACED

Before we get down to the charts, let's look around to see what pushed the precious metals higher as gold posted a new all-time high last Friday at $1985, just shy of the next thousand. The silver price more than doubled since its severe crash in March. Indeed, the precious metals "volcano" awoke erupting its power on fiat, which has been printed heavily. I warned about this trigger in my April post called "Gold Could Fly Over A Helicopter Throwing Money". More than three months have passed since then, why "volcano" erupted only now?

Among the reasons, an escalating trade war and the COVID-19 pandemics. It's all about the relationship between the two largest economies and the health of each of them. US gross domestic product fell at an annualized rate of 33% in the second quarter, said the Commerce Department last Thursday. It's the largest fall on record dating back to the 1940s. The hope for a quick rebound is escaping as economists don't see the recovery to the prior peak until 2022. This contrasts with a V-shaped rebound of the Chinese economy, which showed 3.2% growth in the second quarter after a -6.8% crash in the first one. But that is not enough to restart the global economy as each player matters.

I guess the main driver for the sharp rally of the top metals was the smell of a possible cold war or even a real military collision between the US and China, that appeared recently. I hope it won't happen, but investors are hesitant to bet when this turmoil will end, so they rush to the safe-haven metals to wait through this uncertainty. At the same time, the US dollar index has been sold off dropping from its multi-decade peak at 104 that was hit in March down to the current 93 level. The nearest support is located at 88, the valley that was established in February of 2018. This leaves the room for the top metals to grow even more.

Let's get down to the updated charts, and the daily gold chart will be the first. END_OF_DOCUMENT_TOKEN_TO_BE_REPLACED

At the beginning of this month, I shared a warning alert as the silver chart had a Bearish divergence. The trigger was set below 50 on the RSI. It wasn’t activated, and gold and silver moved higher. Moreover, silver finally hits the target. The majority of readers kept a bullish outlook and got it right.

I prepared an update for you with the bonus chart at the end, so stay tuned. 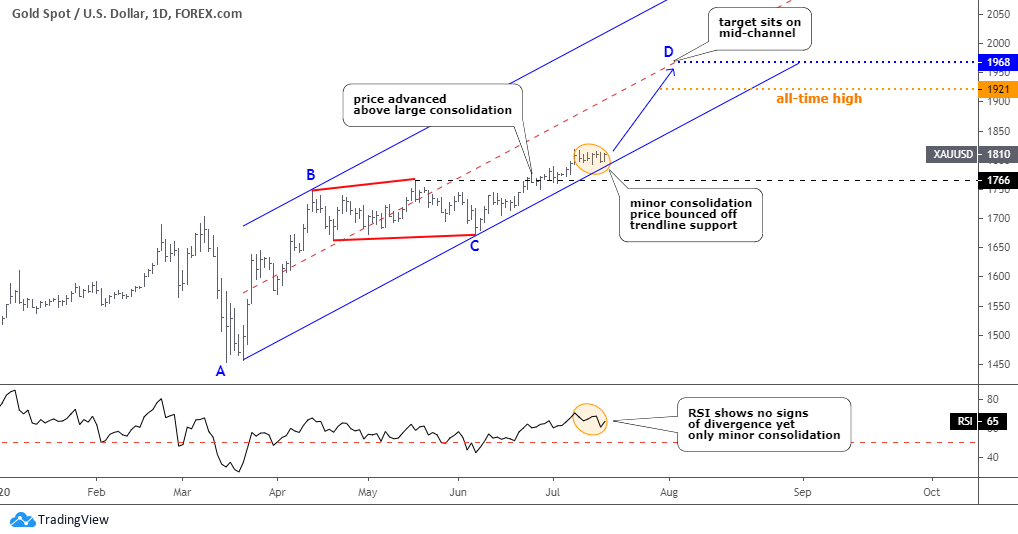 Gold is slowly moving to the upside. It hasn’t shown any bearish signs as of yet. The metal finally elevated above the top of the preceding large consolidation beyond $1766 (black dashed line), eliminating the option of another leg down within an even more extended consolidation. END_OF_DOCUMENT_TOKEN_TO_BE_REPLACED

I appreciate active readers of the Blog for leaving valuable comments on Gold and Silver posts. Recently, there have been a lot of thoughts shared not only about the metals itself but also about its relationship reflected in the dynamics of the Gold/Silver ratio. I think it’s time to talk about it in this post. Please feel free to enrich this piece with your valuable thoughts in the comments section.

Back in December 2014, I shared only the third post here on the Blog. The title was more appropriate for a science fiction novel as it promised the “journey to the Moon” for the Gold/Silver ratio as it was going to hit the 109 ounces. Below is that very chart from the distant 2014 to refresh the memory. 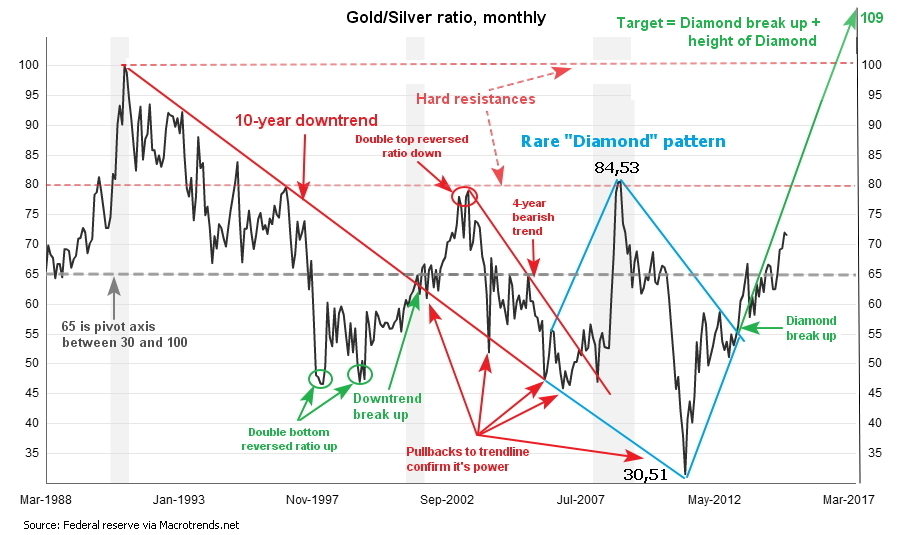 The idea was based on the “Diamond” pattern spotted on the monthly chart (blue). The target was reached more than five years later on the 16th of March this year. The total gain is equal to 109 - 72 = 37 troy ounces of silver per troy ounce of gold or 51% in five years.

Let’s see in the weekly chart below the ratio dynamics after that post. END_OF_DOCUMENT_TOKEN_TO_BE_REPLACED

I was watching top metals closely as their price dynamics didn’t convince with sharp zigzags up and down, which are more appropriate during market consolidations, not trends. When silver hardly tagged the former top on the 1st of July, I got cautious. So, this post is aimed to share with you a warning alert for top metals as I spotted a Bearish signal on the silver chart. I will start with its daily chart below to show you the details. 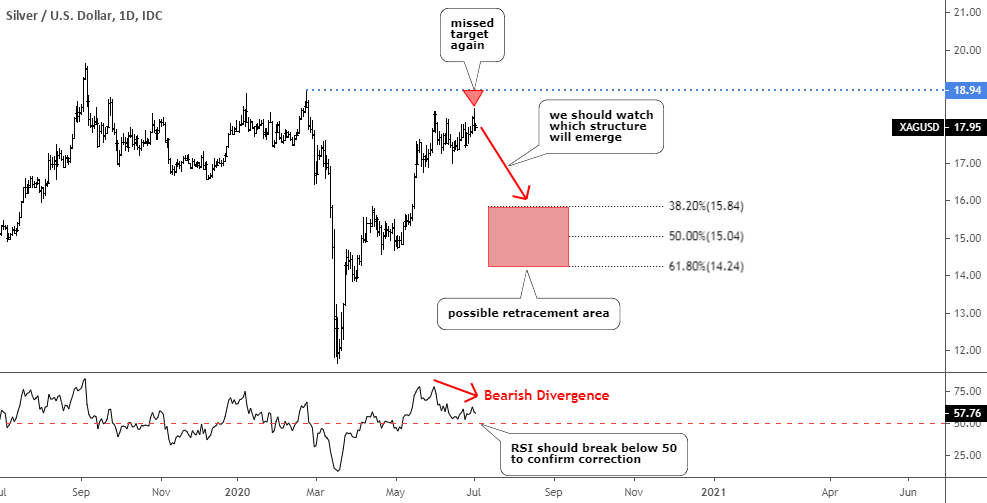 “Silver was a gamechanger” in April as then it finally revealed its structure with a sharp drop and the following V-turn, which indeed changed the game for both top metals since then. This time again, it shows a leading Bearish indicator ahead of gold. END_OF_DOCUMENT_TOKEN_TO_BE_REPLACED