The BOJ Governor, Haruhiko Kuroda, never disappoints when it comes to producing a juicy headline for the newswires. Last time, if you will recall, it was the surprise addition of new stimulus. This time around, in his speech to the Shūgiin, Japan's House of Representatives last week, Governor Kuroda exclaimed that "the Yen is fairly valued." He then continued to outline how the merits of monetary policy have limits.

And what was investors take on Kuroda's message? Clearly fearful. That was evident by the avalanche of investors who failed to consider the underlying message and quickly switched to crowded Yen buying. The USD/JPY move was brutal, with the pair taking a nose dive of 300 pips. Of course, soon after, analysts and experts provided their own take. Opinions ran from "The remarkable rise of the USD/JPY has finally come to an abrupt end" to "the BOJ will not add more stimulus." In fact, big bets on more and more stimulus are now well off the table. But, before you decide to follow the crowd, take a moment to stop, ponder and try to see this for what it very well may be. Simply put, perhaps the spike in the Yen's value is actually an opportunity to sell it high.

Markets are looking at Kuroda's speech as the BOJ saying, essentially, that shorting the Yen from here on out might not be such a good idea. It might also suggest that if the BOJ is pleased with the current value of the Yen, that they might then be less accommodative. Of course, no one knows what exactly goes through the governor's head except Kuroda himself, yet we can speculate. Before I do that, let me first draw a comparison to another central banker, Ben Bernanke, the now retired chairman of the Federal Reserve Bank.

Recall the days when the Fed was heavily involved with injecting liquidity into the banking system. Then, Bernanke explained, on more than one occasion, that there were limits to what the Fed was able to do with only monetary policy. Yet Bernanke's message was not really intended for investors. Rather, it was aimed at the US Treasury and the then-President George W. Bush. Bernanke wanted them to understand that fiscal reforms and measures were also required. In other words, the message the Fed was sending to the US government was this: We've done all we can do; the ball's in your court.

Though the words might be slightly different, it was essentially the same sentiment Kuroda expressed in his speech earlier this month. And similarly, the intent was to pressure the Japanese government and its head, Shinzo Abe, to deliver on their promises of fiscal reforms. To refresh your memory, after the Bernanke speech what happened to QE was that it not only continued but accelerated. Kuroda's underlying message is that the BOJ is ready to do more but that the Japanese government needs to help shoulder the burden. Of the three so-called "arrows of Abenomics," the only one that has been set on course has been the one of monetary stimulus as carried out by the BOJ.

The Yen's Tango with the Dollar

I like to compare the balance of power between a pair of currencies to that of a tango – someone always has to take the lead. In the USD/JPY, the dollar has been taking the lead for a while now. BOJ Governor Kuroda's speech does not, however, change that. The fact of the matter is that while US inflation is stabilizing, Japan's inflationary outlook keeps deteriorating. And even if the BOJ does not accelerate its asset purchases, the carry trade (of selling Yen and buying dollars) remains firmly anchored. Furthermore, if the situation continues to deteriorate either the BOJ will have to act (albeit, reluctantly) or the Japanese government will be forced to come up with some measures of its own. Generally, for the government, that would likely involve more spending. Neither case would be positive for the Yen. If the fundamental background has not changed or the USD/JPY moves lower (higher Yen) then either could be an opportunity to jump on the USD/JPY bullish trend.

Buy on the Dip

If we examine the e-signal chart below, we can see the expanding waves of the trends. Examining the Fibonacci proportions of the pair, and in tandem with my target, the pair still seems to be on the road to 130-131, making it a possible opportunity for the bulls among you to buy the pair's dip and ride it to the top. 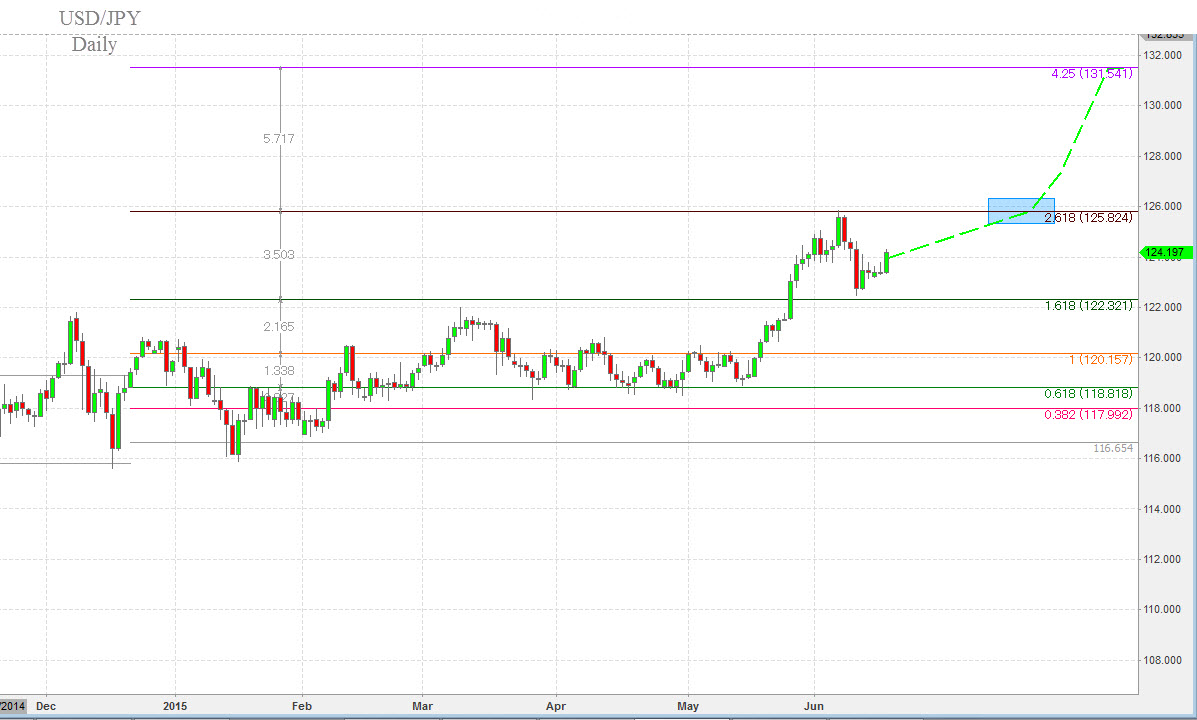