Having spent the lion's share of the last two weeks in Las Vegas and Denver, I've seen my share of solar panels lately. In fact, the express purpose of my Denver trip was to visit and tour a solar plant owned by Greenbacker Renewable Energy Company, a non-traded publicly-registered "YieldCo" investment available to qualified investors through advisors. 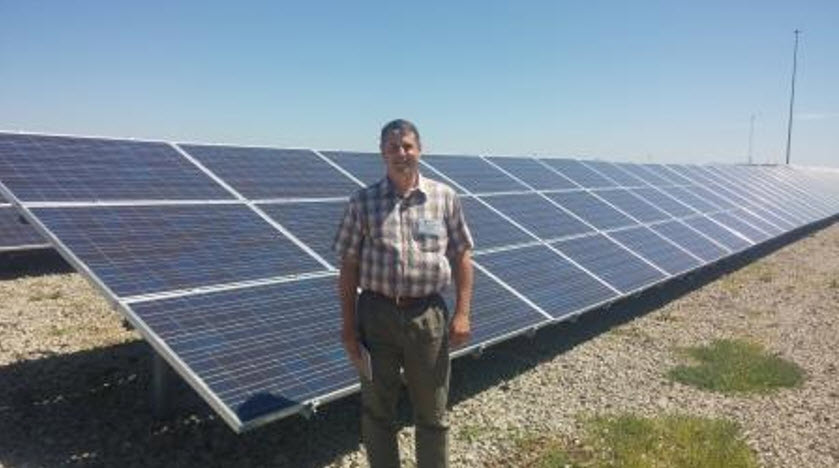 The tour was very interesting, as was our group's educational seminar about Greenbacker (I was an attendee). Greenbacker currently owns 82 already-producing solar facilities in 7 states plus Ontario, Canada. Since the firm's goal is to provide its investors with steady, increasing cash distributions, Greenbacker has locked in contracts with an average of 16 years remaining to sell power to its "offtakers," including credit-worthy utilities, government entities, and corporations. Most contracts include some modest annual increase to account for inflation.

Greenbacker is not yet publicly traded like several other YieldCos are. I wrote about traded YieldCos on May 15th. Actually, Greenbacker's management team claims to have invented the YieldCo structure for its company. Other companies have adopted the structure, including publicly traded companies who have spun off YieldCos, in much the same way oil producers sometimes spin off a Master Limited Partnership (MLP) to handle oil transport business for the parent company and others.

In the case of YieldCos, renewable energy development companies often now spinoff their projects into a YieldCo once the development phase is complete and the facility is generating power that's being sold under long-term contracts. The development business is much different than the power generation business, in terms of risk, cost of capital, business objective, and many other aspects. As with an oil producer spinning off an MLP to separate production from transportation, a renewable energy innovation and development company might see advantages to staying focused on innovation and development, while spinning off its cash-cow assets once development is complete. While developing new technology and projects can be a high-risk, high-reward business, the power generation business - especially when long-term contracts are involved – is naturally a more steady cash flow machine. Often, the YieldCo has a dual objective of steady cash distributions along with increasing cash distributions. And, as with MLP spinoffs, the parent company usually continues to own a large percentage of its YieldCospinoff, while using an IPO as an opportunity to efficiently raise capital via a partial equity sale.

NRG Energy (NYSE:NRG) and SunEdison (NYSE:SUNE) have both spun off YieldCos in the last 1-2 years, for example. In fact, SUNE is in the news this week for 2nd YieldCo spinoff: TerraForm Global (NASDAQ:GLBL), which is scheduled to begin trading Friday, July 31.

SUNE's 1st YieldCo, TerraForm Power (NASDAQ:TERP), just passed its 1-year anniversary on July 18th. It's been a bit of a wild ride. The stock came public at $25, jumped to $33 that same day, and now trades just over $31, having traded in a wide range of $22 – $42. So TERP investors haven't exactly had smooth sailing. By comparison, Greenbacker's non-traded units have held constant at the same price since the company's March 28, 2014 inception. Of course, should Greenbacker list on an exchange through some future IPO, the market price will likely fluctuate significantly just like any other stock. In the meantime, according to Greenbacker's presenters at the event this week, the company's underlying net asset value (NAV) has likely now increased to the point where it's now close to the offering price investors pay (net of any commissions and dealer fees, etc.). The company's 10-Q has not yet been officially updated to reflect this recent NAV action.

TerraForm Power's current distribution yield, according to Morningstar, is about 2.67%, and a projected yield of about 4.23% based on most recent price and distribution levels. YieldCos like TERP typically structure their distributions to be considered a tax-free "return of capital" (ROC) to investors, thanks primarily to large amounts of accelerated depreciation embedded within the company's assets. TERP's website officially says only that "Unit Holders should consult their personal tax advisors as to their specific treatment of TerraForm Power, Inc. distributions"; but TERP's 1099-DIV for 2014 does indicate its distributions did take the form of an ROC. ROC distributions reduce cost basis for investors, essentially deferring capital gains taxation until either sale of shares or depletion of cost basis beyond zero. TERP has made its distributions quarterly, starting with about 23 cents last December, then 27 cents in March, and then 32.5 cents in June. By comparison, Greenbacker makes monthly distributions which also have been and are expected to be considered ROC. Greenbacker pays a 6.0 - 6.53% yield (depending on whether you pay a commission going in). Greenbacker has not yet passed along a dividend increase.

TerraForm Global (NASDAQ:GLBL), today's spinoff from SUNE, distributes electricity generated by the wind, solar, and hydro plants. According to an IPO outlook by Benzinga earlier this week:

Benzinga's IPO outlook also points out, from GLBL's S-1 filing, the company's express objective – like its sibling, TERP – to provide rising dividends to its shareholders. Quoting the S-1:

"Our business objective is to increase our dividend to stockholders by continuing to acquire, from SunEdison and unaffiliated third parties, clean power generation assets."

In fact, according to Zacks Research, GLBL's first quarterly dividend is "expected to be $0.275 per share, or $1.10 per share annually. TerraForm Global has plans to increase the dividend at a compound rate of 20% annually in its first three years after the IPO."

Again, this key point about GLBL's stated "dividend growth" objective for its shareholders is typical of many YieldCos, including Greenbacker. YieldCos often aim to provide distributions that increase over time.

The expected growth of renewable energy

Solar currently contributes less than 0.5% of total US energy. But exclude transportation (which is predominantly driven by oil and gas), and solar contributes nearly 3% of US electricity for residential and other purposes. While still very small (and still trails nuclear, hydro, and wind by modest margins), solar’s contribution is rising rapidly. This analysis is derived from a Lawrence Livermore National Laboratory graphic from March 2014, using data gathered by the US Department of Energy. The graphic was shown at the Greenbacker conference.

Many states and municipalities have targets requiring their regulated electric utilities to produce increasing proportions of energy from renewable sources over the next 5, 10, and 15 years. In fact, government entities, corporations, and utilities are moving that direction anyway, as solar and wind achieve "grid parity" pricing with other energy sources. "Offtakers" aren’t just moving toward renewables to be benevolent. They're increasingly doing so to save money.

All that said, when you invest in a YieldCo like TERP, GLBL, or Greenbacker, you're really investing in a tax-advantaged cash-generating entity, based simply on the underlying long-term contracts from existing, producing renewable energy plants. It's primarily an income-oriented investment, rather than a growth investment – even though, as discussed herein, publicly traded YieldCos can be subject to a great deal of market-driven volatility.

This concludes our tour of renewable energy investments for today. Turn in your hard hats and name tags on the way out, and happy investing!

Disclosure: At the time of post publication, this contributor is in the process of making an investment in Greenbacker Renewable Energy Fund, but doesn't own any other investments mentioned in this article. This article is the opinion of the contributor themselves. The above is a matter of opinion provided for general information purposes only and is not intended as investment advice. This contributor is not receiving compensation (other than from INO.com) for their opinion.

One thought on “Renewable Cash Flow”