Judging a company by its stock price can often lead investors astray. Sometimes a single bad event can drag down a stock's price while leaving its long-term growth potential fully intact. It's these types of opportunities that value investors love to pounce on.

As we head into the holiday season, investor sentiment is mixed when it comes to how consumers will spend. On the positive side, US GDP growth for the 3rd quarter was revised higher to 2.1% while unemployment fell to just 5%. However, consumer spending inched just 0.1% higher in October – less than expected.

Sales expectations for the holiday season appear to be optimistic. FedEx released an estimate earlier this week that it is on track to handle over 317 million packages between Black Friday and Christmas – record numbers and an increase of 12.4% from last year. Online sales are also expected to rise this year between 6% and 8% according to a recent National Retail Federation (NRF) survey.

Total holiday spending is expected to rise 3.7% to $630.5 billion this year. While some estimates may point to a lagging global economy, there are plenty of positive signals that consumer spending will be healthy and robust for the holiday season.

One company had solid fundamentals and more than one catalyst that could send them higher over the next few months. Despite a minor setback that brought down its stock, the long-term value it holds could mean that this stock is trading at a significant discount right now.

Build-A-Bear Workshop Inc. (NYSE:BBW) is a small cap $200 million specialty toy maker and retailer with more than 400 stores worldwide. Its unique custom stuffed bear creation is very popular during the holiday season and the company should be one to watch for a surprise upside earnings beat in the 4th quarter.

For the year, the stock is down more than 37% – most of it occurring following a recall announcement of a defective product. The company received a large amount of negative press about the incident which drove the stock down considerably in a very short amount of time. However, the sell-off appears to be overblown with Build-A-Bear's long term fundamentals still very much intact.

Investors also seemed to overstate the importance of the company's 3rd quarter earnings miss. While the company reported well under expectations at $0.10 per share versus $0.21 per share, the vast majority of the company's annual earnings comes from the 4th quarter like most other retailers.

A quick look at Build-A-Bear's stock chart shows us exactly how fast the stock price plummeted. 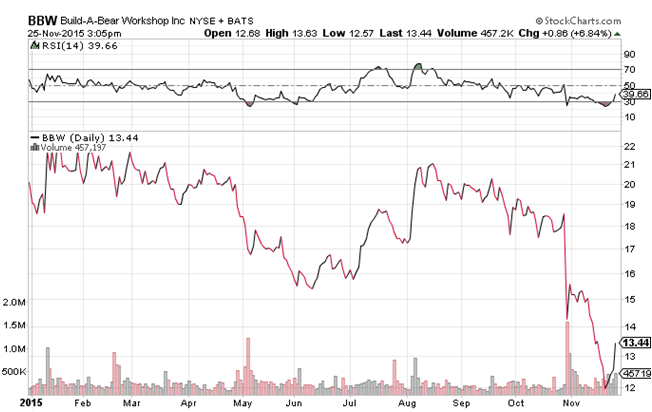 The stock fell precipitously this month after the recall announcement but does appear to have bounced off its lows on higher volume – a positive sign that the stock has bottomed and is on its way back up. Also, note that the stock looks undersold with a RSI reading of 39.66.

The stock's valuation is attractive right now trading at just 9.4 times earnings against an industry average of 23.6. The company also carries no long-term debt obligations making it agile in difficult economic environments as well as being a potential take-over target which would drastically increase the stock's value if an offer were tendered.

Management also recently authorized a share buyback program worth $15 to help lift the stock and give investors some downside protection.

Based on full year earnings estimates and a fair P?E valuation, this stock could easily be worth around $21 per share – a huge 61% potential pop if the holiday season goes as expected. Considering the company's attractive price-to-sales valuation as well as its lack of debt, it's a strong buyout candidate – a possibility that investors should keep in mind as we go into the holiday season.