This past weekend, Donald Trump, the leading Republican candidate for the Presidency of the United States, predicted in a Washington Post interview that we are headed for "a very massive recession." His prognostication goes against what most analysts are forecasting and the fact that the stock market is within 500 points of its all-time high.

Now, Donald Trump is many things. But, he is not stupid and we should not rule out anything in today's marketplace. You don't become a billionaire by doing stupid things and certainly I think he has an interesting take on the current economic environment. Just as he has tapped into the anger of the average American citizen and his unlikely rise to the top of the Republican Party, don't dismiss what he is saying because you may or may not like him personally. 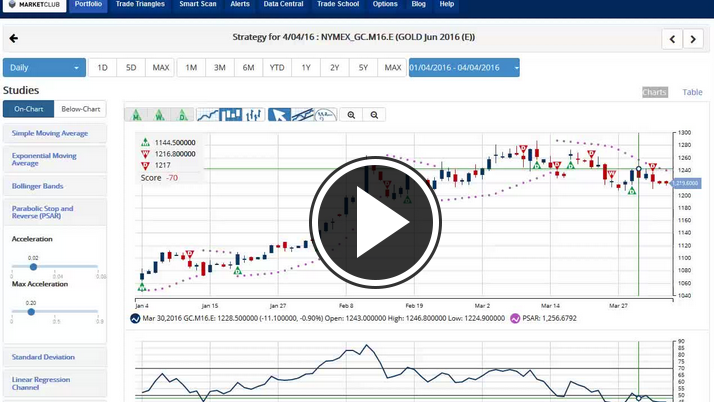 What has been fueling this market to the upside is free money from the Fed. It certainly hasn't been corporate profits. Most corporations have wrung out the last few vestiges of efficiency in their companies expenses.

Having said all that, I'm not totally convinced the market is going to go a lot higher. At the moment, the major indices are giving mixed signals, the Dow and the S&P 500 are positive while the NASDAQ is in a broad trading range. All three indices are very overbought and are due for some form of correction, in my opinion.

NEVER BUY STOCKS ON A MONDAY...

Normally buying stocks on Monday is not the best time of the week to do so. The exception to that would be if a stock were breaking out of an important technical formation or if the Trade Triangle technology triggered a buy signal. Generally speaking, midweek tends to be a good time to buy stocks. Notice I said generally, of course, there are always exceptions to every rule.

Gold (FORX:XAUUSDO): For the past two months, gold has been trapped in a broad trading range between $1280 and $1200. Here is what to look for in this market right now:

1. The major trend is positive.
2. Watch the RSI indicator for signs of a move over 50. (see lesson below)
3. Keep an eye on both the weekly and daily Trade Triangles. I still feel that this market has a lot more potential to the upside longer-term.

Crude Oil (NYMEX:CL.K16.E): The price of crude oil is within a dollar of my downside target around $35.50 a barrel. A completed Fibonacci retracement of 61.8% takes the market down to $35.24. I expect to see some support coming in around those levels. If you are an aggressive trader, you could take a stab at buying at those levels. However, you would be trading against the trend which puts the odds against you. I would like to see the market begin to consolidate around the $35.50 area and then begin to move back up to trigger Trade Triangle buy signals.

Today's Market Lesson: I'm going to show you the correct way to interpret and successfully use the RSI indicator. You have heard me talk many times about the RSI indicator and how useful it is in determining support and resistance areas, as well as trends. In this short video, you will quickly grasp the RSI concept and how you can successfully use it in your trading.

As we start a new week, I'm really looking forward to hearing from you with any questions or comments you may have about the markets.

7 thoughts on “A Very Massive Recession Is Coming”