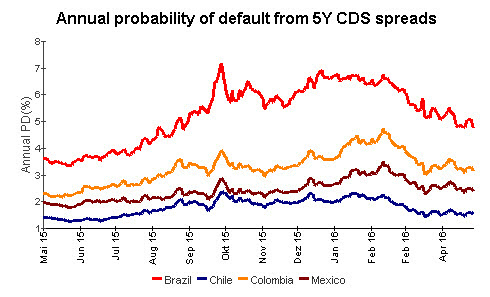 But the CDS chart illustrates another very interesting picture. While the fall in risk is across the board, Brazil, the largest economy in the region, is deemed as the most probable to default on its debt by a wide margin compared to much smaller regional peers.

Brazil is in the midst of economic turmoil and a political storm. At the heart of the matter is incumbent President Dilma Rousseff.

Rousseff is being charged with “cooking the books” of the country’s national accounts. According to the Financial Times, Rousseff is accused of using Brazil’s banking system to hide budget spending and disguise Brazil’s real debt levels from the public.

Moreover, Brazil’s recession, the worst since the 1930s, is being attributed to the mismanagement and reckless spending of Rousseff and her left wing party, Partido dos Trabalhadores.

But there has been a development and a positive one at that. After a prolonged battle, it seems the chickens have finally come home to roost. This past Monday, the Brazilian Congress passed a bill to impeach Rousseff. Now what’s left is for the Senate Committee, which will gather on May 11th, to give the final approval and terminate Rousseff’s rule.

The likely candidate to take the reins if Rousseff is impeached is Vice President Michel Temer, a member of the Partido do Movimento Democrático Brasileiro party. The Vice President is well known for his friendly approach to investors and his more centralist ideology.

Although the latest development in Brazilian politics is an encouraging development, it still leaves Brazil as a wild card. While things are moving in the right direction, one must understand that the situation remains very liquid. Brazil’s economy is still extremely fragile and things could go very wrong.

With an elevated level of uncertainty and the risk still high, the Brazilian Real is still a risky play, despite the potential upside from a change in government. Moreover, until the impeachment is final, it is unclear what surprises Brazilian politics can produce. Provided the situation in Brazil doesn’t spin out of control, the recovery in oil prices (alongside copper, corn and other major regional export commodities) should favor the “Pesos,” aka the Chilean Peso, Mexican Peso and Columbian Peso. Together, they could allow an investor to benefit from the improved outlook for Latin America without being overly exposed to the risk of Brazil’s drama.

Notable plays could be buying the Mexican Peso or Chilean Peso against the Yen and the Euro. While playing LATAM against the US Dollar could be lucrative, it’s important to wait for signs that weakness will continue before playing that high-reward/high-risk game.

One thought on “LATAM: Watch Brazil But Buy The Peso”