Will the confluence of abating political uncertainty, proposed self-regulation on drug price increases, potential merger and acquisition activity and chronically depressed valuations bode well for IBB in 2017? The biotech cohort saw a very tumultuous 2016 to say the least as the political backdrop, drug pricing debate and presidential election took the headlines. Biotech stocks responded erratically to any news that would have a perceived impact on the cohort during this timeframe. Since Donald Trump voiced his concerns over drug pricing, the initial rally in biotech has largely eroded to pre-election levels. The iShares Biotechnology Index ETF (NASDAQ:IBB) traded in a wide range throughout 2016 with pronounced volatility throughout the presidential election cycle registering a range of ~$240 to $344 or a 104-point range (Figure 1). The upcoming 2017 year is shaping up to be an eventful one with continued uncertainty about the political climate, governmental stance on mergers and acquisitions and potential deregulation. Another hot button issue will be the potential restructuring of the Affordable Care Act and proposed favorable tax and repatriation rates.

Throughput 2016, the entire pharmaceutical supply chain from drug manufacturers (i.e. Mylan and AbbVie) to pharmacies/pharmacy benefit managers (i.e. CVS and Walgreens) and the drug wholesalers in-between (i.e. McKesson, Cardinal Health) have been hit particularly hard. The confluence of proposed legislative action via Proposition 61 in California, continuous threats by potential presidential candidates such as Hillary Clinton and Bernie Sanders, Senate summons for Valent and Mylan to defend drug pricing, pricing pressures throughout the pharmaceutical supply chain have pummeled the sector (Figure 2). Drug manufacturers, wholesalers, pharmacy benefit managers and pharmacies have not been immune to this massive sell-off. With the presidential election now finalized, the mere absence of political uncertainty may provide a lift to the sector. 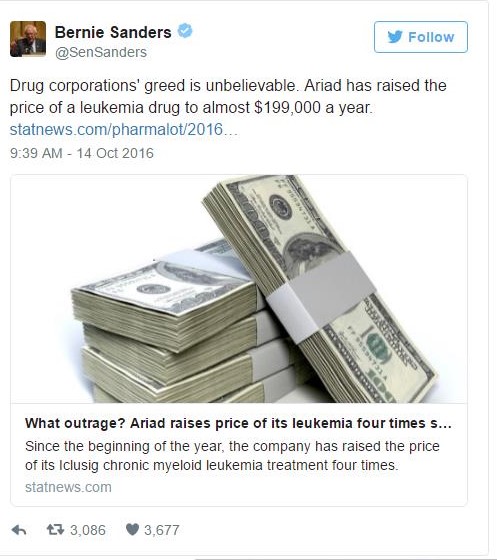 Proposition 61 was defeated in California which aimed to cap the state’s drug expenditures by linking all future costs to match those costs paid by the Veterans Affairs (VA) for the same drugs. This initiative would’ve prohibited state agencies from buying any prescription drug from a drug manufacturer at any price over the lowest price paid by the VA. This proposition was rife with issues such as excluding managed care programs funded through Medi-Cal, the state’s largest health care program. This misguided proposition ran a high risk of increasing prescription drug prices for the VA, reducing patient access, creating more bureaucracy and lawsuits. The amount of any savings was highly uncertain and would’ve likely resulted in very little to no savings and companies may have increased pricing to the VA and selectively omitted discounts for certain drugs altogether. The failure of this proposition in a largely liberal state may derail similar attempts in other states thus removing a pharmaceutical headwind regarding pricing. Proposition 61 took aim at the drug pricing debate which continues to be at the forefront of politicians’ attacks towards pharma companies while the same fight is being waged in the court of public opinion. As potential presidential candidates threatened drug companies with containing the costs of drugs, their actions negatively impacted biotech stocks in particular.

The drug pricing debate has been at the forefront and is not going away anytime soon and will likely persist into the new administration. Donald Trump has made that clear during his interview with Time Magazine for his Person of the Year award. Pharmaceutical executives seem to have taken note of this and are attempting to get out in front of the issue. Brent Saunders (CEO of Allergan) has led the charge in this movement. He vowed to limit drug price increases to single-digit percentages once a year. This seems to be working to some extent with Novo Nordisk falling in-line with a similar commitment. “We hear from more and more people living with diabetes about the challenges they face affording healthcare, including the medicines we make,” Jakob Riis, Novo Nordisk's U.S. president. “This has become a responsibility that needs to be shared among all those involved in healthcare and we’re going to do our part.” If drug companies self-regulate and get this drug pricing issue behind them along with a favorable governmental landscape, this will likely bode well.

Merger and acquisition activity within the biotech/pharma space has heated up as of late with Pfizer’s acquisition of Medivation for $14 billion, Allergan’s acquisition of Tobira for $1.7 billion and J&J’s acquisition of Abbott’s Medical Optics unit for $4.3 billion. As the cohort remains suppressed, many prospective buyout candidates become more financially appealing to the acquirer due to beaten down valuations in concert with the maturity of pipelines coming into play. As this acquisition activity heats up, be on the lookout for stocks that have been rumored as takeover targets to heat up and possibly take IBB along for the ride.

iShares Biotechnology Index ETF (NASDAQ:IBB) sold off by more than 20% in 2016 and 40% from its 2015 highs of ~$400 per share. Considering the aforementioned factors laid out in concert with the double-digit sell-off, I feel 2017 appears to be a much more favorable environment for IBB to see gains. At current levels, IBB has significant upside based on 2015 highs of $400 per share. This bullish set-up may be further accelerated if M&A activity takes off due to chronically depressed valuations throughout the sector.

One thought on “IBB Looks Ripe For A Turnaround In 2017”