It’s time for a health check for CVS Health Corporation (NYSE:CVS) after reporting its most recent quarterly earnings and seeing its stock move in a wide range over the past few months. CVS reported what was ostensibly another great quarter and full-year numbers, reporting a full-year increase of 25.1%, 13.2% and 11.7% in free cash flow, EPS and revenue, respectively. After reporting its Q4 earnings, CVS held steady in contrast to the massive 17% sell-off after reporting its Q3 numbers, moving down from $84 to $70. I’ve written several articles contending that CVS presents a compelling investment opportunity in the ever expanding healthcare space. My investment thesis was based on sector consolidation, aging population and growth in long-term care facilities in combination with the fact that CVS has been highly acquisitive, continues to deliver robust earnings growth, revenue growth, growing dividends and has an aggressive share buyback program in place. With its recent acquisitions of Target’s pharmacies and Omnicare, these proactive measures will significantly expand its presence and ability to dispense prescriptions to the general public and in long-term care facilities. As health care costs and prescription drug costs continue to rise and the population continues to age with the elderly comprising a larger segment of the overall population, CVS looked poised to benefit. However, during the Q3 earnings call CVS noted that recent marketplace trends had forced CVS to cut guidance for Q4 2016 and the full-year 2017 numbers. This guide-down negatively impacted shares however the long-term narrative remains intact. CVS has strong fundamentals and growth and I felt that the previous sell-off after the Q3 release was an overreaction. Since then, Q4 numbers have been released and the share price has retraced the low $80 range and appears to be consolidating for another move up.

Q4 2016 Redemption and Return to Growth

CVS reported solid earnings for Q4 2016 and the stock hung in there in contrast to the Q3 report when shares immediately tanked by 17% shedding $14 per share. I strongly felt that those sold-off levels were an overreaction given its growth rate (despite the lowered guidance), acquisitions, partnerships, newly issued aggressive stock repurchase program and dividends. Looking at the Q4 2016 results, net revenues increased 11.7%, to $46.0 billion. Over the same time period, adjusted EPS grew by 11.8% while free cash flow contracted by 51.0%. 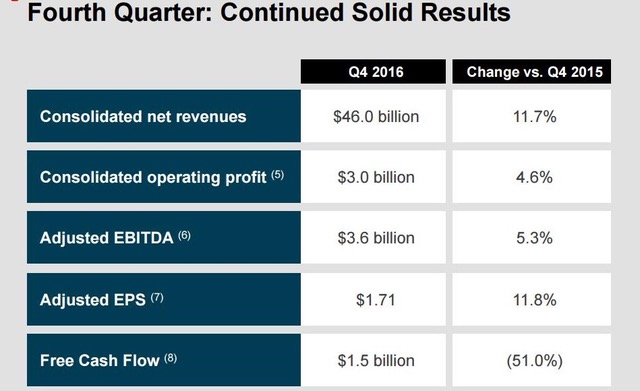 During the Q3 earnings call, CVS issued guidance that scared investors for both the full-year 2016 numbers and the preliminary 2017 full-year numbers. CVS stated that the numbers were lowered due to “competitor actions restricting us from pharmacy networks as well as current trends in the retail business”. CVS stated that there’s slowing prescription growth in the overall market and a soft seasonal business affecting the pharmacy and the store front. During the Q4 call, CVS presented actions on returning to healthy growth. This included partnering more broadly, new PBM products, enterprise streamlining initiatives and returning value to shareholders. 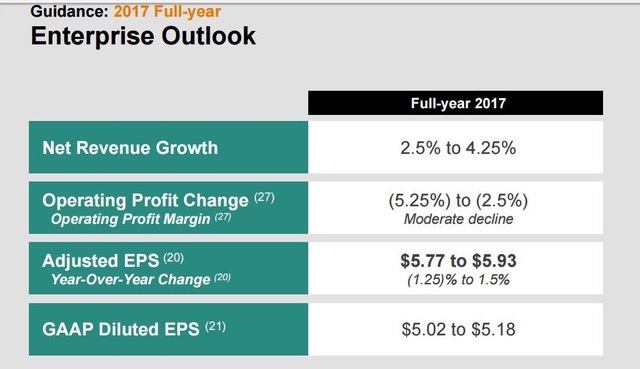 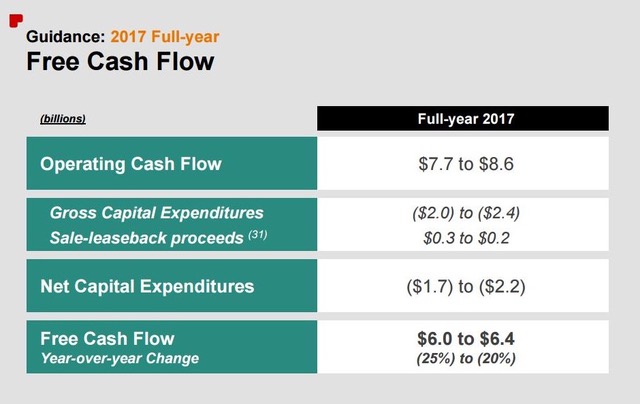 “CVS Health can pivot to address policy changes, help reduce health care costs, and bring meaningful solutions to the marketplace”. I’ve highlighted in many of my pieces that the threats and blame with regard to drug pricing is largely unfounded. The entire supply chain is much more complex than simply stating drug prices are too high and need to come down. The interplay between pharmacy benefit managers, insurance companies, pharmacies, drug manufacturers, wholesalers is not trivial and another layer of complexity is added when dealing with rebates, discounts and chargebacks. Then there’s the cost-to-benefit analysis to consider such as curing a disease relative to the standard of care. CVS contends that “any suggestion that PBMs are causing drug prices to rise is erroneous”. They went further and added “A recent industry study showed that every dollar invested in PBM services returned $6 in savings for our clients and members”.

The political backdrop has been a headwind for the entire sector but has also caused increased volatility. The entire pharmaceutical supply chain from drug manufacturers (i.e. Mylan and AbbVie) to pharmacies/pharmacy benefit managers (i.e. CVS and Walgreens) and the drug wholesalers in-between (i.e. McKesson and Cardinal Health) have been hit particularly hard in 2016. The confluence of proposed legislative action via Proposition 61 in California, continuous threats by presidential candidates such as Hillary Clinton and Bernie Sanders, Senate summons for Valeant and Mylan to defend drug pricing and pricing pressures/pricing competition throughout the pharmaceutical supply chain have pummeled the sector. Drug manufacturers, wholesalers, pharmacy benefit managers and pharmacies have not been immune to this massive sell-off.

Recent marketplace trends forced CVS to cut guidance for Q4 2016 and the full-year 2017 numbers. CVS stated that “unexpected marketplace actions that will have a negative impact on our Q4 2016 results and a more meaningful impact on our outlook for 2017”. These network actions will result in more than 40 million retail prescriptions shifting out of stores on an annualized basis. CVS lost a contract with the Department of Defense to Walgreens which carries tens of millions of prescriptions on an annual basis. New restricted network relationship between Prime Therapeutics and Walgreens impacts CVS Pharmacy’s participation in selected fully-insured networks in several key states and many cases make CVS Pharmacy a non-preferred provider for Medicare Part D as well. To add insult to injury, these prescriptions tend to be the most profitable prescriptions.

The PBM segment remains a positive for the company with specialty expected to deliver strong growth. The Retail segment is expected to see a significant headwind of more than 40 million prescriptions from network changes and year-over-year growth acceleration from Omnicare and Target slightly slower than anticipated. Currently, CVS expects year-over-year EPS of about 17 cents, which includes the impact on CVS pharmacies within Target related to network changes, compared to an initial forecast of 26 cents. Despite these negatives, moving into future years CVS is targeting 10% adjusted EPS growth and the generation of $7 billion to $8 billion in free cash flow annually.

CVS pays some of the highest corporate taxes with an effective tax rate of 39%. Per CVS, a meaningful reduction in corporate taxes will allow CVS to unlock even greater economic opportunities. President-elect Trump and top congressional Republicans have supported a lower tax rate for corporations. President Trump has been a proponent of a 15 percent business tax rate. Moving forward, if the corporate tax rate is decreased this will provide a windfall of money to potentially make more investments to drive growth, increase the dividend and share buybacks.

In addition to the potential corporate tax reform, CVS continues to drive shareholder value with significant cash generation and deploying this cash in the form of an annual dividend increases and share buybacks. CVS just announced that they are committing $15 billion to repurchase shares. Combined with what is remaining in the prior authorization, CVS now has $18.2 billion available for share buybacks. CVS repurchased 6.1 million shares in Q4 2016. CVS also offers a backdrop of dividends which is now a quarterly dividend of $0.50 which translates into a 2.5% yield based on an $81 share price. Collectively, CVS’s buybacks and dividend payouts double reward shareholders.

Recent marketplace trends have forced CVS Health Corporation (NYSE:CVS) to cut guidance for Q4 2016 and the full-year 2017 numbers. With Q4 numbers out and revised full-year 2017 numbers released, the negative narrative has been priced into the stock in my opinion. Growth is still being forecasted for full-year 2017 numbers albeit slower growth than past years. With moderate growth across the enterprise and $18.2 billion earmarked for share repurchases along with a $2.00 per share in dividends moving forward, CVS remain a buy at these levels. CVS has been highly acquisitive, growing dividends over time and buying back its shares to drive shareholder value. I think CVS has guided conservatively and will make the appropriate adjustments to mitigate potential headwinds. The new administration will likely bode well for the entire healthcare cohort in terms of taxes, mergers and acquisitions and deregulation which may allow further marketplace easing. I remain long CVS, particularly at the sub $85 level.