Hello traders everywhere. The Chinese government announced on Wednesday that they would slap a 25% tariff on $16 billion of U.S. goods to include diesel, fuel oils, and other petroleum products. China has already taxed U.S. crude imports and has also announced plans to place tariffs on U.S. liquefied natural gas.

This announcement has sent U.S. West Texas Intermediate (WTI) crude futures to a new three-week low and getting close to its seven-week low. Oil is down -3.8% on the day hitting a session low of $66.32 and looking to test the seven-week low sitting at $66.29 and if it closes below that level look for it to test the 200-day moving average sitting at $64.33. 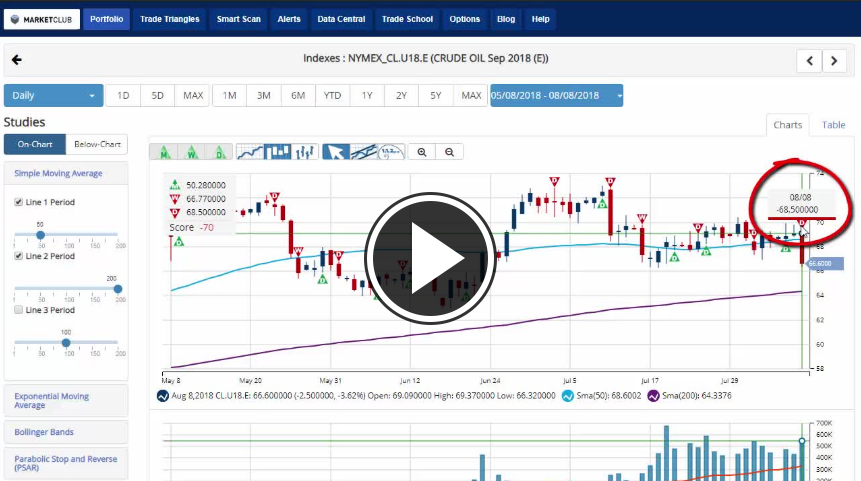 Bitcoin continues to head lower under intense selling pressure triggering a new red weekly Trade Triangle at $6,331.69 and breaking through the 50-day moving average. The recent sell-off is in large part due to the decision by the Securities and Exchange Commission (SEC) to delay a ruling on a long-awaited bitcoin ETF to September.

The 7.9% sell-off in the last 24 hours reinforces the idea that the reason for the recent the rally in July was likely fueled by speculation that the SEC would approve a Bitcoin ETF within weeks. Look for Bitcoin to test the four-week low sitting at $6,075.95 with a possible consolidation at that level, but if it the move lower pushes through that level we could see it take out the yearly low of $5,823.19.