Facebook’s (FB) fundamentals were shining bright and outweighed its data misuse scandal from months’ prior leading into its Q2 earnings. In the wake of mishandling user data, Facebook’s stock tumbled from $195 to $152 or 22%. Facebook was well off those data misuse induced sell-off lows and marched right through its previous 52-week high and broke out to $219 for a nice ~44% rebound. This scenario ended abruptly on the heels of its Q2 earnings which came in shy of analysts’ expectations on the revenue front. Facebook also issued a major guide down in growth for the next few quarters tampering growth expectations in the near term. Facebook is facing a challenging confluence of slowing revenue growth, margin compression and stagnant daily active users in the near to intermediate term. Facebook’s CFO stated that investors could expect "revenue growth rates to decline by high single-digit percentages from prior quarters." Despite these headwinds, Facebook is still posting accelerating revenue growth across all geographies, expanding market penetration with Instagram’s IGTV, Facebook’s Stories and monetization efforts in Messenger and WhatsApp. Factoring in this high single digit decrease in revenue, Facebook is still poised to grow at a double-digit clip with the most recent growth rate coming in at 42% in Q2. The long-term picture looks bright for Facebook, and the recent sell-off is a good opportunity to initiate a long position as the company contends with and addresses all the issues across its platforms. Facebook remains a premier large-cap growth stock and inexpensive relative to other large-cap growth stocks in its cohort.

Well, that was a disaster of a conference call. Facebook posted the largest one-day loss in market value by any company in stock market history. Facebook shed $119 billion worth of market capitalization after dropping ~20%. No other company has ever lost greater than $100 billion in market value in a single day (Figure 1). To add insult to injury, this was also Facebook’s worst day ever on the stock market. This sell-off came on the heels of a minor Q2 advertising revenue miss of $13.04 billion versus expectations of $13.16 billion and lower than expected daily active users in Europe. Key metrics suffered from data misuse and fake news issues within its platform.

North America daily active users remained flat in the wake of the Cambridge Analytica data misuse scandal. Despite this lack of growth, average revenue per user increased from $23.59 in Q1 to $25.91 in Q2 2018. These numbers are in contrast to European daily active users which suffered a loss of ~3 million relative to the previous quarter. It’s noteworthy to highlight that these numbers were potentially impacted by the recent enactment of the General Data Protection Regulation (GDPR) in the European Union which empowers users to control their online data. Per Sheryl Sandberg, "GDPR hasn't had a revenue impact, but we also fully recognize it wasn't fully rolled out," and "As we look further out, we recognize there's still a risk, and we're going to watch closely."

Facebook has had a rather choppy history when it comes to conference calls and subsequent sell-offs (Q2 and Q3 of 2016 both saw sell-offs of 8%), but this one takes the cake without a doubt. Facebook warned investors that it expected revenue growth to be lower than the previous year, especially in the second half of 2018. On the conference call, CFO David Wehner stated shareholders could expect "revenue growth rates to decline by high single-digit percentages from prior quarters" for the third and fourth quarter. "We plan to grow and promote certain engaging experiences like Stories that currently have lower levels of monetization, and we are also giving people who use our services more choices around data privacy which may have an impact on our revenue growth," Wehner also said currency fluctuations would hurt the stock in the second half of the year, after helping it for the last several quarters. Wehner went on to say that the company expects margin compression, with operating margins trending toward "mid-30s on a percentage basis," compared with second-quarter operating margins of 44 percent.

That margin compression is the result of expanding markets, investments in new products such as the company's long-form video format, IGTV and capital expenditures related to safety and security that total "billions of dollars," Wehner said. "We think that's the right thing to do for the business regarding ensuring the community, safety, and durability of the franchise," he said. "But they don't have an obviously immediate translation into revenue dollars." Over the past few quarters, Facebook has ramped up spending on initiatives to combat fake news, ensure data integrity, implementing stringent guidelines on third-party data sharing and overall transparency within its platform. Facebook had already moved to overhaul its news feed in favor of “meaningful social interactions” versus “relevant content” to improve its user experience. 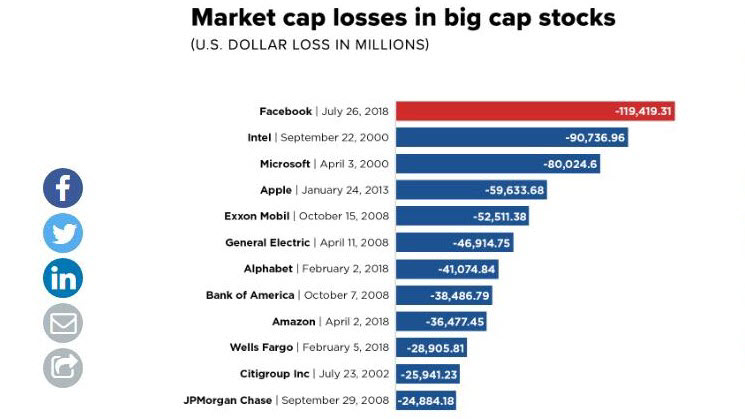 Facebook posted revenue growth of 42% coming in at $13.231 billion against $9.321 billion in the prior year. EPS grew by 32% coming in at $1.74 against $1.32 in the prior year. Daily and monthly active users were up 11% year-over-year on the whole. Facebook ended the quarter with $42.31 billion in cash and cash equivalents. Facebook also reported growth in revenue across every geography during the quarter (Figure 2). Facebook has been growing revenue by over 40% as of the last few quarters and factoring in a “decline by high single-digit percentages from prior quarters" let’s assume this growth rate settles at 25%. Facebook now trades at ~$175 per share after this sell-off and now trades at a P/E ratio of 27.3 and a PEG ratio (P/E ratio divided by growth rate) of 1.25 suggesting an annual growth rate of ~22% in EPS. EPS as of Q2 2018 was $6.46 thus factoring in a 22% premium we would theoretically arrive at $7.88 at the end of Q2 2018. Assuming Facebook continues to trade at a P/E of ~25 with an EPS of $7.88, the stock price would be ~$197 per share, conservatively by this time next year. I think Facebook is guiding too low to be conservative thus I feel investors will still enjoy ~25% revenue growth with a P/E of ~30 placing the stock price at ~$240 per share within one year. 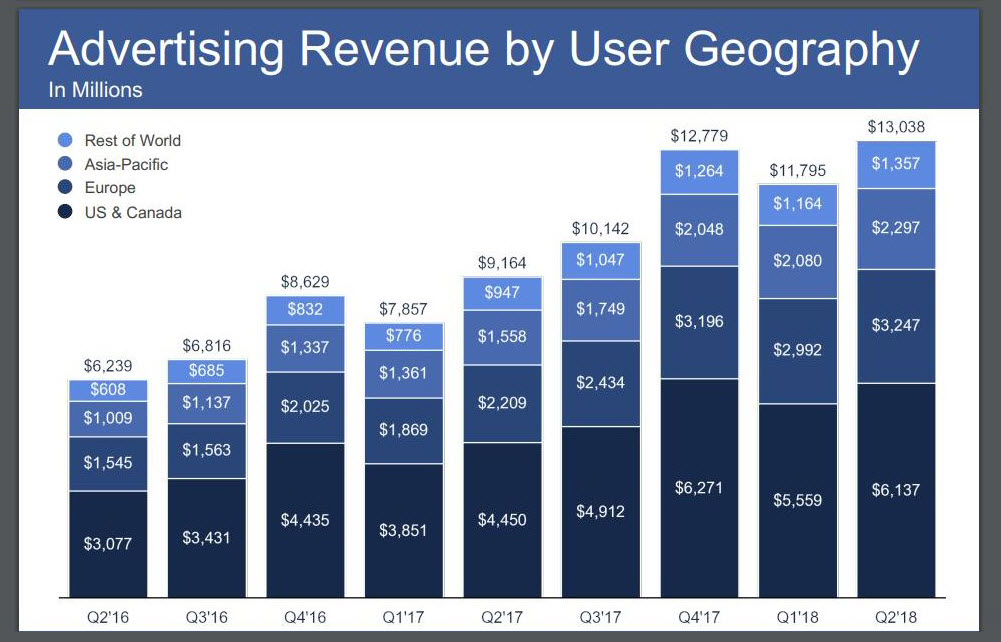 In terms of the moat, Facebook possesses a deep moat that’s comprised of Facebook, Instagram, Messenger, and WhatsApp. Facebook and its properties have dominated the social media landscape for years and will likely continue its dominance where monthly active users stand at 2.23 billion and 11% increase year-over-year. Instagram has been a major growth area for the company in recent years, outcompeting Snapchat (SNAP) in its growth path. Instagram Stories now have 400M daily users compared to Snapchat’s 191M. Facebook is also improving the user experience with Instagram’s latest update to Stories lets users add background music.

Regarding advertising, the go-to platforms are Facebook properties, and outside of those, there aren’t very many options where companies can maximize ad dollars. Many Fortune 500 CEOs have communicated that Facebook is the most effective means in reaching their target audience and thus maximizing advertising spend.

Facebook has posted robust growth in all metrics pertaining to user growth and engagement while monetizing has moved in lock-step over the years. For such a large capitalization company such as Facebook, this growth is very impressive. Facebook just recently acquired teen app called tbh in October of 2017. Facebook provides the most durable growth out of the basket of similar growth stocks with a lower P/E and PEG ratio and thus provides a margin of safety. With the recent sell-off, the stock has been de-risked. Facebook has plenty of room to appreciate into the years ahead given its growth, and even if the stock appreciates to ~$200 range soon, it will still be inexpensive on a relative basis. Facebook makes a compelling case that it is the superior choice for long-term growth with a low-risk profile within its growth cohort.

Revenue growth slowdown, margin compression, and daily active users in limbo will certainly challenge Facebook in the near to intermediate term. Despite these headwinds, Facebook remains a long-term buy especially after this major sell-off while revenue growth remains best-in-class within the large-cap cohort. The broader questions of potential regulation, public backlash, additional data misuse cases and whether or not any material impact to revenue, as a result, remain in question. Facebook is trying to get out ahead of any of these issues by spending billions on initiatives to combat fake news, ensure data integrity, implementing stringent guidelines on third-party data sharing and overall transparency within its platform. Despite all the headlines regarding the privacy scandal and slowdown in revenue growth, Facebook posted a monster blowout for its Q2 2018 numbers with an 11% increase in active users while growing revenues by 42% to $13.2 billion.

Facebook has been growing revenue by over 40% as of the last few quarters and factoring in a “decline by high single-digit percentages from prior quarters" let’s assume this growth rate settles at 25%. I think Facebook is guiding too low to be conservative thus I feel investors will still enjoy ~25% revenue growth with a P/E of ~30 placing the stock price at ~$240 per share within one year. Thus, I maintain my long thesis with a price target of $220 by the end of 2018 in the face of this sell-off. In my opinion, Facebook is the most compelling high-growth technology stock when compared to other companies with a similar growth profile and market capitalization.

Disclosure: The author holds shares of Facebook and is long Facebook. The author has no business relationship with any companies mentioned in this article. He is not a professional financial advisor or tax professional. This article reflects his own opinions. This article is not intended to be a recommendation to buy or sell any stock or ETF mentioned. Kiedrowski is an individual investor who analyzes investment strategies and disseminates analyses. Kiedrowski encourages all investors to conduct their own research and due diligence prior to investing. Please feel free to comment and provide feedback, the author values all responses. The author is the founder of stockoptionsdad.com a venue created to share investing ideas and strategies with an emphasis on options trading.