Hello traders everywhere. Geopolitical events have a way of popping up when you least expect it. Case in point, we were looking and waiting for the U.S. stock market too high record highs with the S&P 500 within a whisker of hitting its record only to wake up this morning to a sharp down move on the Turkey news. That news has ended what looked to be the S&P 500's six straight weeks of gains, it's first such streak since November, with the S&P 500 currently floating between a weekly loss and gain.

The DOW was down over 200 points in early trading and has backed off the lows a tad but now posting a weekly loss while the NASDAQ remains in a strong position to close out the week in positive territory. 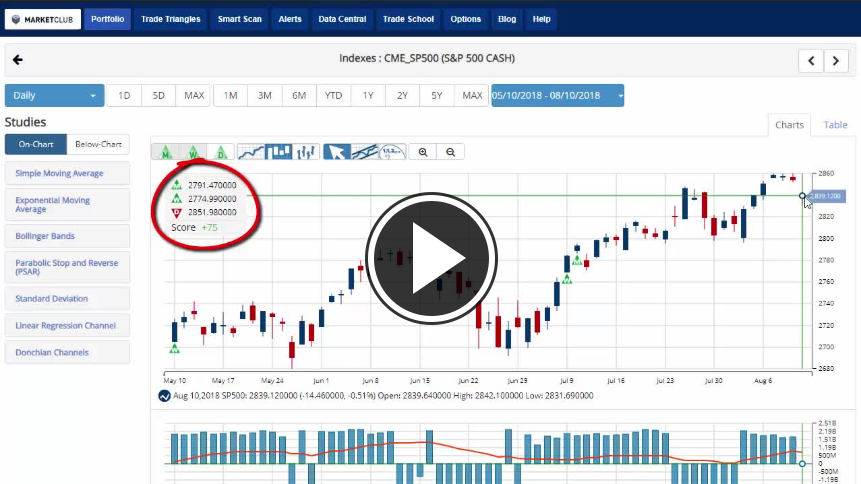 The Turkish lira tumbled to a record low against the dollar due to concerns over the country's economy and a deepening rift with the United States. President Trump doubled tariffs on aluminum and steel imports from Turkey, deepening the currency's losses and raising concerns that the crisis could weigh on other economies. In turn, that led U.S. investors to safe-haven assets, with the dollar rising to a 13-month high, up +1.3% for the week and U.S. bond yields slipping to a three-week low.

Gold continues to head lower for the week losing -.35% and maintaining its long-term downtrend with five straight weeks of losses. Even though crude oil is up today, +1.23%, it is posting its second straight week of losses with a -1.15% loss this week.

After issuing a new red weekly Trade Triangle on Wednesday Bitcoin posted a gain on Thursday and is relatively unchanged today, but it will post a weekly loss of -7.9% after losing a little over -14% last week.