The financial cohort is in a difficult space as the broader economic backdrop continues to dictate whether these stocks can appreciate higher. A delicate balance between interest rates, Federal Reserve commentary, yield curve inversion, trade war, and concerns over a potential recession in late 2019 or early 2020 must be attained. A disruption in this complex web can lead to the financials breaking down as witnessed in Q4 2018 and in May of 2019. In Q4 2018 rates were increased by the Federal Reserve and sent the financials in a downward tailspin. In May 2019, a trifecta of a yield curve inversion, trade war concerns, and increased chatter about a potential recession on the horizon again sent the cohort lower. The broader market appreciated markedly in June, and the bank stocks participated in the rally. Coupled with renewed record share buybacks and increased dividend payouts stemming from successful stress tests, banks elevated higher on the news. Now, the market is anticipating that the Federal Reserve will cut rates at its next meeting, which may serve as another catalyst to propel some bank stocks to new 52-week highs.

The market-wide sell-off in the fourth quarter of 2018 was largely induced by the Federal Reserve and its alleged commitment to sequential interest rate increases into 2019. This was largely viewed as reckless and misguided while turning a blind eye to broader economic data-driven decision making about further interest rate hikes. The stock indices responded to the sequential interest rate hike stance with overwhelming negative sentiment, logging double-digit declines across the broader markets. Many market observers were questioning the Federal Reserve’s aggressive stance as companies issued weakness in ancillary economic metrics (slowing global growth, strong U.S. dollar, trade war, government shutdown, weak housing numbers, retail weakness, auto sluggishness, and oil decline) as an indication that cracks in the economic cycle were materializing. The strong labor market and record low unemployment served as a basis to rationalize increasing rates to tame inflation; however, these aforementioned economic headwinds appeared to cause the Federal Reserve to pivot in its aggressive stance. As Chairman Jerome Powell began to issue a softer stance on future interest rate hikes, January saw very healthy stock market gains after being decimated for months prior. On January 30th, Jerome Powell issued language that the markets were craving to levitate higher as he left interest rates unchanged and exercised caution and patience as a path forward. Using data-driven decision making as a path forward was cheered by market participants as the broader indices popped for healthy gains on top of the already robust gains throughout January.

The 2019 Federal Reserve and Jerome Powell

As the market cheered the pivot in the Federal Reserve’s stance on interest rate increases in Q1 2019, Q2 remained somewhat choppy until a strong June as a result of hopes for a rate cut came to the rescue. The market rose 17% during the first half of 2019, logging the best first half to the any given year in over 20 years.

The Federal Reserve has been busy removing constraints from the narrative of sequential rate hikes as it heeds slowing global growth, strong U.S. dollar, trade war, weak housing numbers, retail weakness, auto sluggishness, and oil decline. A softer stance on rising interest rates could provide the financials room to breathe as hopes of a rate cut have already boosted share prices. All of the major banks have witnessed a significant bounce from their fourth-quarter lows as clarity has now entered the economic interest rate narrative by the Federal Reserve. The banks are healthier than ever, well-capitalized with strong balance sheets. Now, the Federal Reserve-induced headwinds that cast clouds over the financials have been lifted.

The banks, specifically JP Morgan (JPM) Wells Fargo (WFC), Bank of America (BAC), Goldman Sachs (GS) and Citigroup (C) are coming off of record profits and revenue across the board. With all these solid numbers from all the big banks expected to continue coupled with a moderating Federal Reserve stance on rising interest rates may allow this group to be liberated finally and appreciate higher.

Federal Reserve Chair Jerome Powell will address the market expectations for a late July rate cut when he speaks to Congress. Powell testifies before the House Financial Services Committee and at the Senate Banking Committee and is expected to answer questions on the economy and Fed policy. His testimony comes after a strong June jobs report places uncertainty about whether the Fed will cut rates later this month on the 31st. The U.S. economy added 224,000 jobs in June, topping the estimate of 165,000.

The expected rate cuts have lifted all major indices to all-time highs however economists say the markets would see a violent swing if Powell doesn’t stay on track for a rate cut. The fed funds futures market is pricing in one full quarter-point rate cut and a little more for July. 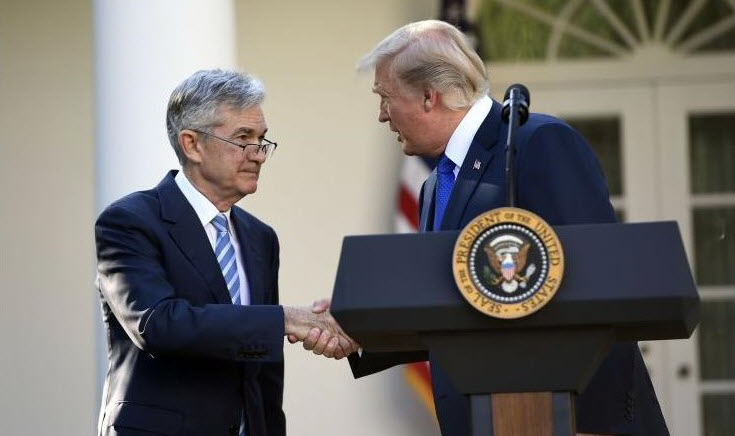 Figure 1 – Jerome Powell shakes hands with President Donald Trump, a relationship that has been contentious in recent months

The financial cohort was stuck in a precarious situation in the latter half of 2018. On the one hand, a rising interest rate environment would provide boosts to bottom-line revenue as a function of the increased rates on their deposit base. Banks had domestic and global economic expansion tailwinds at their back while posting accelerating revenue growth, increasing dividend payouts, engaging in a record number of share buybacks, benefiting from tax reform and deregulation. All of these elements, ostensibly provided an ideal confluence that boded well for the financial sector. JP Morgan (JPM), Citi (C), Wells Fargo (WFC), Goldman Sachs (GS) and Bank of America (BAC) seemed to be poised to continue to benefit from the favorable economic backdrop. Despite all these elements, 2018 was terrible for the financials which performed horribly, especially during the fourth quarter as rapid rate hikes were in the cards.

The banks would certainly be negatively impacted by an inverted yield curve as the gap between long-term and short-term Treasury yields potentially unfold and serve as a reliable predictor of difficult economic conditions ahead. Banks borrow at short term rates via deposits and interbank lending and lend at long term rates to businesses, autos, and home loans. Thus, when long-term rates exceed short-term rates, bank lending is profitable, and the opposite is true under inverted yield curve conditions. This typically signals troubled credit markets via restricted access to capital and reduced lending to fuel the economy.

The annual stress test results came back overwhelmingly positive for the financials. Eighteen of the biggest institutions operating in the U.S. had to show they can survive an economic downturn while maintaining the ability to make loans and continue paying out dividends. That hinges on a bank’s capital, or the difference between assets and liabilities, which acts as a cushion to absorb losses. Every bank won approval to boost shareholder payouts under the capital plans they submitted. Collectively, the results show a resilient banking industry compared to the financial crisis a decade ago, when the government had to bail out lenders. The banks have more than doubled the capital it has to absorb losses to about $800 billion, per the Federal Reserve.

The financial cohort had been decimated in 2018 and particularly in the fourth quarter largely due by a Federal Reserve induced sell-off over rapidly rising interest rates. Now that the Federal Reserve has taken notice and acknowledged cracks in the global trends via slowing global growth, strong U.S. dollar, trade war, weak housing numbers, retail weakness, auto sluggishness, and oil decline. Now, a delicate balance between interest rates, Federal Reserve commentary, yield curve inversion, trade war, and concerns over a potential recession in late 2019 or early 2020 must be attained. A disruption in this complex web can lead to the financials breaking down as witnessed in Q4 2018 and in May of 2019. Coupled with renewed record share buybacks and increased dividend payouts stemming from successful stress tests, banks elevated higher on the news. Now, the market is anticipating that the Federal Reserve will cut rates at its next meeting, which may serve as another catalyst to propel some bank stocks to new 52-week highs. The inverted yield curve is typically indicative of a looming recession and will negatively impact the banks and their ability to run profitable businesses under such conditions however the financial cohort is very inexpensive and poised to benefit from the easing Federal Reserve stance on rising interest rates for the foreseeable future.