International Business Machines (IBM) is fresh off its strong quarterly results, followed up by news that its CEO is stepping down. Each event separately drove the stock higher as investors cheered the duo of better than expected earnings and a change at the CEO level. IBM continues its long turn back to growth, focusing on high-value faster-growing business segments while embracing the future of technology with AI and hybrid cloud architecture via the Red Hat acquisition. Over the past few years, IBM has taken a blended approach of M&A, realigning its business mix to current and future trends, maintaining its dividend payout, and continuing to buy back shares while layering-in the major Red Hat acquisition.

IBM’s stock has been on an upward trend after investors decided to move past its initial displeasure of announcing its RedHat acquisition when shares were sold-off and traded down to ~$108. IBM's executive leadership has set the growth and value narrative, and investors are quickly realizing the value that Red Hat brings to the table while washing away fears that IBM overpaid for the $34 billion acquisition. From the $108 dip, IBM has been in a position of strength and has broken out past $144 after its recent Q4 2019 earnings. Long-term imperatives are beginning to bear fruit in emerging high-value segments that have fundamentally changed its business mix while evolving its offerings to align with new age information technology demands. The Red Hat acquisition will augment its transition away from its dependence on legacy businesses to the future of hybrid cloud, artificial intelligence, and analytics.

IBM reported Q4 2019 earnings that were better than expected, beating on both the top and bottom line. These results boosted shares by ~4.5%. IBM reported EPS of $4.71 and revenue of $21.8 billion, which was flat year-over-year while beating analysts’ targets. IBM popped the following day to above the $145. The company laid out its growth narrative and Red Hat acquisition catalysts. IBM's revenue was flat across most of its business segments; however, its Cloud revenue grew by 23% when excluding the impact of divested businesses (Figure 1).

"We ended 2019 on a strong note, returning to overall revenue growth in the quarter, led by accelerated cloud performance, looking ahead, this positions us for sustained revenue growth in 2020 as we continue to help our clients shift their mission-critical workloads to the hybrid cloud and scale their efforts to become a cognitive enterprise."

Furthermore, IBM used the fourth quarter to deleverage significantly after it closed the Red Hat acquisition.

“In 2019, we continued to invest in the higher-value growth areas of the industry and took bold actions — including several divestitures and a major acquisition — to position our business, which are reflected in our strong gross margin performance, after completing the acquisition of Red Hat, and with strong free cash flow and disciplined financial management, we significantly deleveraged in the second half.”

I think there’s a lot to like moving forward. There’s reassurance that the dividend is safe, stabilizing revenues, and a lot of shots on goal for future growth especially with Red Hat coming into to fray and strategic imperatives becoming a larger segment of IBM’s overall revenue pie as this is a higher growth business (Figure 1). 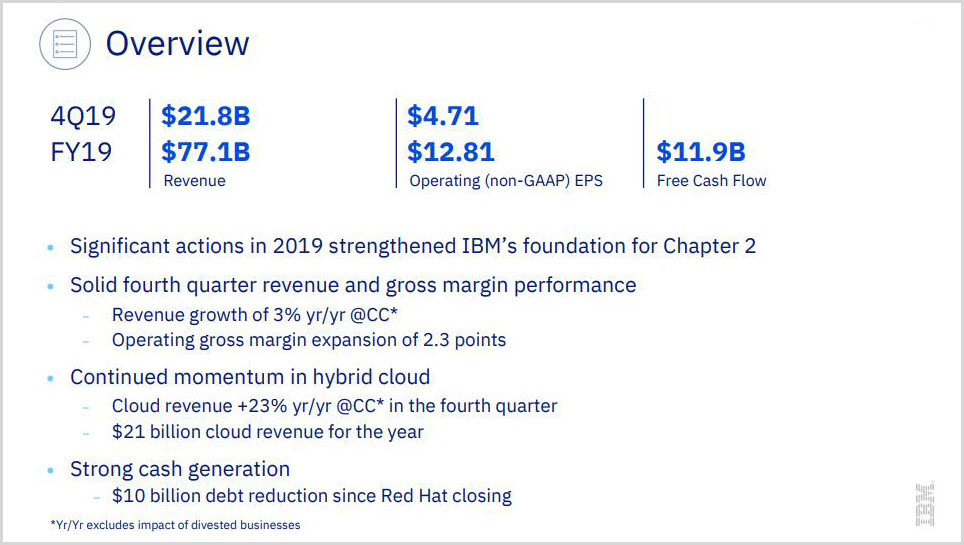 IBM acquired Red Hat for $34 billion, and investors are beginning to realize the added value this property brings to the table.

"Most companies today are only 20% along their cloud journey, renting compute power to cut costs. The next 80% is about unlocking real business value and driving growth. This is the next chapter of the cloud. It requires shifting business applications to hybrid cloud, extracting more data, and optimizing every part of the business, from supply chains to sales."

Most notably, IBM says the acquisition will accelerate IBM's revenue growth, gross margin, and free cash flow within 12 months of closing. We already see the acquisition add value to IBM (Figure 2). This growth accelerator is a much-needed boost to the company’s stagnant growth over the past few years and will drive IBM further into the future of the cloud and where businesses are mitigating from an enterprise perspective. Red Hat is the world’s leading provider of the open-cloud solution and the emerging leader in the platform for hybrid-cloud and multi-cloud. IBM is attempting to reset the cloud landscape via its acquisition of Red Hat and in the process, will become the undisputed number one leader in hybrid-cloud, which is an emerging $1 trillion market.

Companies are moving into the second chapter of the cloud, where they’re moving away from simple cost synergies/business value to an inflection point of moving all their processes and their data to a hybrid environment. The first chapter was estimated to be roughly 20% of the cloud market and this second chapter is estimated to be the next 80% with hybrid, multi-cloud, open, secure end-to-end in multi-cloud management.

Red Hat brings 90% penetration in the Fortune 500, and they are now one of the key foundational technologies of the hybrid-cloud. As clients transition to hybrid and multi-cloud, Red Hat can leverage their large installed base and its open architecture. Hence why Red Hat has emerged as one of the key foundational technologies for hybrid cloud computing. All of this feeds into analytics, data, AI, and Watson since all that combined data across these environments need to be delivered securely. 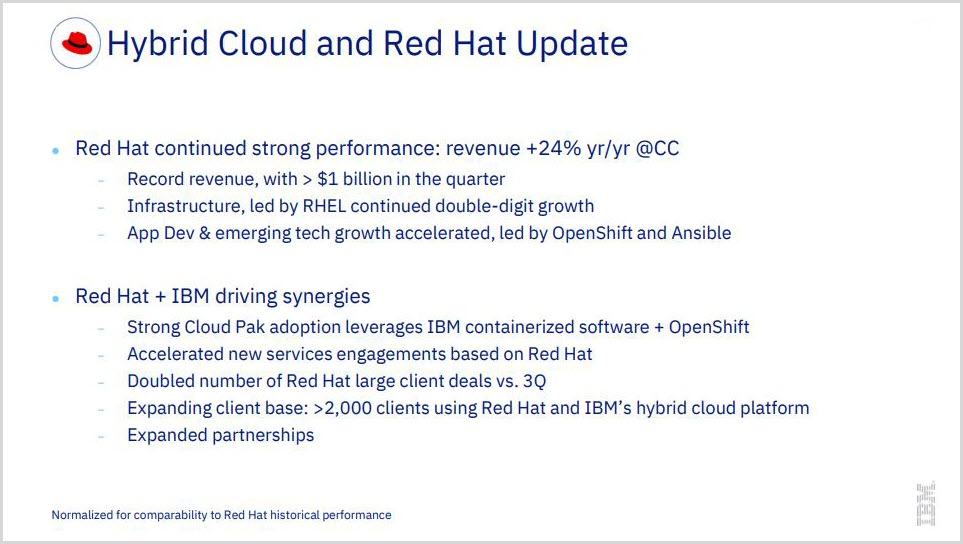 Figure 2 – Impact of Red Hat acquisition during its Q4 earnings

Red Hat will accelerate IBM’s growth and reinforce its high-value model from a revenue growth standpoint and the shift to a higher value. Red Hat had been growing revenue at strong double-digit rates and a similar level of backlog growth. Red Hat has high margins and great free cash flow generation. Red Hat will accelerate IBM’s top-line revenue growth rate by 200 basis points on a five-year CAGR. Red Hat accelerates the business shift to higher value and expands gross profit margin, and free cash flow in year one, and operating earnings per share by the end of year two.

From the Red Hat perspective, their offerings can now benefit from IBM’s scale and resources to enhance the development and continuous improvement of its infrastructure, management, automation solutions and cloud application development. IBM believes that this will bring revenue synergies and clearly stated that it’s not about a cost synergy case, but a revenue growth case because this acquisition is about growth.

A potential growth driver for future revenue growth lies in blockchain. I think IBM has a new frontier of growth in the nascent blockchain technology as the company is a first-mover in this promising, emerging technology. IBM’s enterprise blockchain solutions will be a substantial growth engine for the company as more companies adopt this technology. Blockchain has the potential to penetrate the $2 trillion in global payments and $1.8 trillion global supply chain. Recently, healthcare has come into the equation as another huge addressable market. IBM has partnered with CVS Health's Aetna and other insurers on a blockchain network to cut healthcare industry costs. The companies will use the network for processing claims and payments and for maintaining a directory. Anthem, Health Care Services and PNC Bank are also involved with the project.

IBM is offering the first enterprise-grade blockchain platform for permissioned networks and is aggressively stepping into the enterprise blockchain solutions space. Any company looking to employ blockchain technology will likely leverage a company like IBM for the blockchain infrastructure as it’s a first-mover in the space and Juniper Research ranked IBM as the top blockchain company in the world with 40% of surveyed tech executives and leaders ranking IBM as their preferred blockchain service provider. IBM is well-positioned as it is the #1 enterprise blockchain partner with greater than 400 projects with world-renowned companies across many different sectors involving transactions such as Dow, Walmart, HSBC, Nestle and Visa.

Partners in the food industry are Nestlé, Unilever, and Kroger. In global shipping, IBM is working with Maersk, Dow Chemical and DuPont. IBM’s blockchain is seeing inroads in the finance industry as well with Societe Generale, HSBC, WeTrade, Unicredit and Santander being top partners. IBM is also working with payment providers like VISA, BBVA, CIBC, EarthPort, and Polynesian payments platform KlickEx.

The IBM Food Trust Solution, which Walmart helped develop, makes the food supply process more transparent and traceable in the event of an illness outbreak. Prior to the blockchain technology adoption, it took roughly a week to trace the source of food, and blockchain reduces the time to a matter of seconds, mitigating the risk of tainted food reaching consumers. Albertson’s recently joined IBM’s food safety network as well.

IBM released a duo of positive events with its better than expected earnings and a change at the CEO position. Investors received each of these events with positive sentiment lifting shares after each event was announced. IBM is continuing to slowly realign itself for future growth with new and emerging end markets while making acquisitions for future growth with a hybrid cloud focus via Red Hat. Red Hat brings its leading platform for hybrid-cloud and multi-cloud with 90% penetration into the Fortune 500. IBM is attempting to reset the cloud landscape via its acquisition of Red Hat and, in the process, will become the undisputed number one leader in hybrid-cloud which is an addressable $1 trillion market. Red Hat will accelerate IBM’s top-line revenue growth and its business shift to higher-value with margins expanding and free cash flow generation. Blockchain technology has yet to be broken out as a revenue line item. However, IBM is a first mover in this promising, emerging technology with partnerships across all industries and recently, healthcare.

Investors are pleased with the blended approach of M&A, realigning its business mix to current and future trends while maintaining its dividend payout. IBM's executive leadership has set the growth and value narrative and investors are quickly realizing the value that Red Hat brings to the table while washing away fears that IBM overpaid for the $34 billion acquisition. Long-term imperatives are beginning to bear fruit in emerging high-value segments that have fundamentally changed its business mix while evolving its offerings to align with new age information technology demands. The Red Hat acquisition will augment its transition away from its dependence on legacy businesses to the future of hybrid cloud, artificial intelligence and analytics. IBM presents a compelling investment opportunity with a 4.5% dividend yield, share buyback program and continuously acquiring companies to drive the business into the future.