When I first started watching the meteoric rise of Dogecoin (DOGE) over the last few months, I couldn’t believe my eyes. And my eyes have seen a lot in the cryptocurrency world!

From trading for less than a penny for most of its life, it shot up to a couple of cents in January. From there, it took off, reaching a high of $.68 in May. It now trades around $.25.

That kind of volatility is nothing new. But when you’re talking about a cryptocurrency with a market cap in the billions, it’s something special.

So, we’re going to break down Dogecoin and see if it’s really worth all the hoopla it’s been getting.

First off, how do you pronounce Dogecoin (DOGE)?

It’s not doggycoin or dogcoin. Rather it’s “dohj coin.” (Search for dogecoin on Google and it will pronounce it for you.)

Now down to business.

Dogecoin is much like any other cryptocurrency. It is a digital currency built on the blockchain and can be bought and sold on crypto exchanges.

And like most other cryptocurrencies on the blockchain, it is secured by a decentralized ledger that is duplicated and verified by all network participants. Transactions that pass the check and verification process are then added to the blockchain.

The cryptocurrency was created in 2013 mainly as a light-hearted currency alternative to the more serious Bitcoin (BTC). And you can see why: The coin is based on the popular doge internet meme that features a loveable Shiba Inu dog on its logo. (An internet meme is a gif or short video that goes viral in popularity). The fact that the cryptocurrency uses the misspelled word “dog” should give you some insight into its origins.

Over the past few months, the Dogecoin ride has been one for the history books. It now sits with a recent market cap of $32 billion, making it the fifth-largest cryptocurrency on the planet.

Why Is Dogecoin So Popular?

Fact is, Dogecoin remained pretty much under the radar since its inception in 2013. It was supported by a strong community of enthusiasts who could use it to “tip” creators of quality content on Reddit and Twitter. But beyond that, it wasn’t doing much.

All that changed when Elon Musk got behind the coin. The billionaire’s SpaceX firm has announced the DOGE-1 Mission to the Moon that will be paid for with Dogecoin. He went on Saturday Night Live and mentioned the coin repeatedly. And all you need to do is take a gander at his Twitter feed to see how much he likes this coin.

And he’s not alone. Mark Cuban – popular owner of the Dallas Mavericks – are behind the coin, along with celebrities Gene Simmons and Snoop Dog. 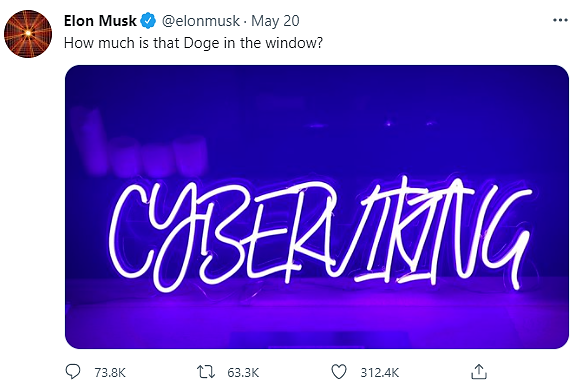 But the fact is just about every cryptocurrency is loaded with risk. All you have to do is to take a look at the charts of the biggest cryptos, and you’ll see wild, volatile price swings. And, of course, that includes Dogecoin.

But that being said, the fact is not all cryptocurrencies are the same and have the same risk profile. And I think Dogecoin carries more risk than its compatriots. Here’s why:

Is that a big deal? It can be. When assets have a fixed supply and the demand for owning that asset rises, the price of the assets rises as well. The opposite is true, tool: Assets in low demand with unlimited supply tend to have the prices fall.

Second, if you’re a Dogecoin miner, you’re rewarded for adding a new block to the blockchain every minute. And your reward is a staggering 10,000 Dogecoins. That’s a lot of new supply getting thrown into the market each minute.

Third, with a market cap of $32 billion, you would expect blockchain development to be going gangbusters. But that’s not been the case. Before its update in February, no one had touched the code since 2019. In my book, that’s hardly enough development to stay on top of new features and tweaking securities features.

Fourth, Dogecoin wealth is concentrated in just a few hands. Recently, a single Doge wallet held a staggering 28% of Dogecoin supply. The next holder in line was just 4%. Compare that to Bitcoin, where the largest holder has just 2% of supply, with number two owning less than 1%. That’s means a single owner of Dogecoin could have a major impact on prices.

And lastly, this chart should give you a glimpse into Dogecoin’s riskiness: 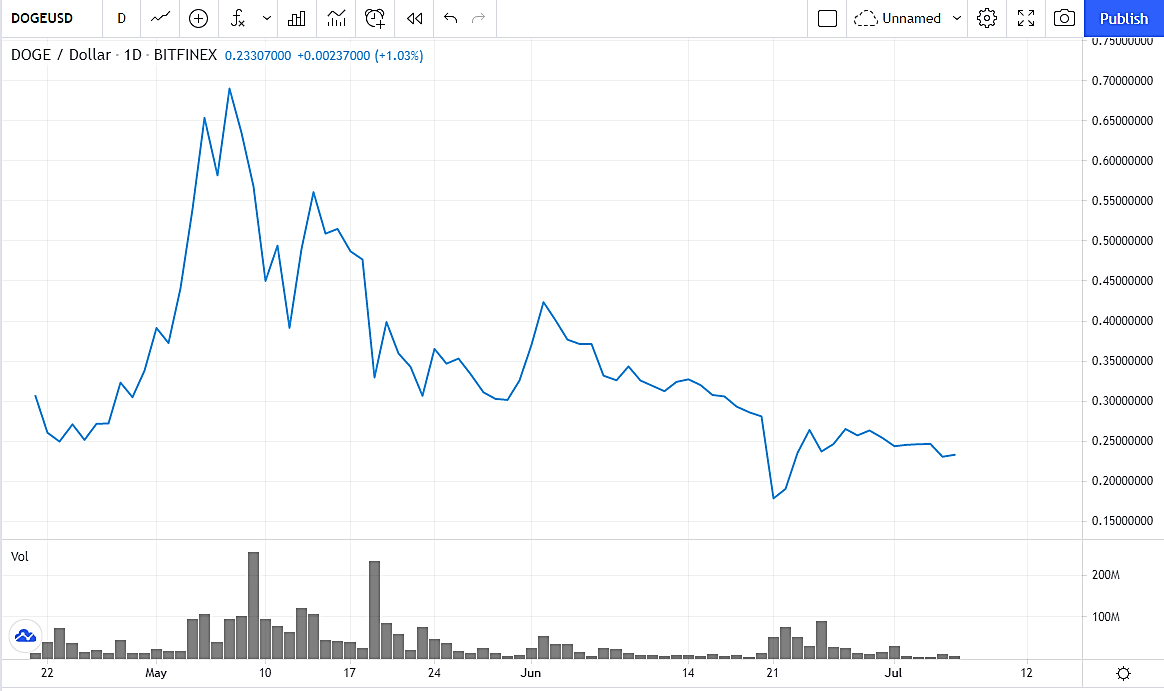 While Dogecoin has a dedicated group of community followers and enthusiasts, I can’t help but think that if Elon Musk woke up one day and decided he hated Dogecoin, the bottom would fall out of the cryptocurrency within minutes. So, while all cryptos are highly volatile and risky, Dogecoin is in a class by itself. But if you decide that Dogecoin is worth a shot, with a market cap of $32 billion, you wouldn’t be alone. But don’t think of it as any more than a lottery ticket.