I almost fell out of my chair when I read the latest take on the outlook for blockchain technology by consultancy behemoth Deloitte.

While I expected the report to show some positive signs, the fact is global executives see blockchain as making a “seismic” shift in just about everything they do, from business models to scalability to competition.

And we’re not talking about a time horizon many years down the road. The survey showed that these corporate movers and shakers think the blockchain seismic shift is already underway and will fundamentally change their industry within just 24 months.

But that’s not all: Inside the report are bombshells that even blew me away.

Whenever I do a deep dive into a survey, I look at the nitty-gritty behind the methodology. That’s because what you ask and who you ask makes a big difference when it comes to survey results and value.

Well, Deloitte’s 2021 Global Blockchain Survey: A new age of digital assets certainly passed muster. The survey polled 1,280 senior executives in 10 locations around the globe, including the U.S., the U.K., and China. People responding to the survey had to have at least some knowledge of cryptocurrencies, blockchain, and digital assets.

Of the 1,280 executives, the survey broke out people in the financial services industry (FSI). They accounted for 320 of the respondents. Then Deloitte went a step further and targeted a group of 70 executives who they considered “pioneers” – people who worked for organizations that had already gotten their feet wet with blockchain.

Blockchain Is Changing Everything

You don’t have to dig very deep into the survey to find the first bombshell...

“Blockchain is driving change in the holistic financial ecosystem, from deposit-taking to payments, lending, investing, and trading anything of value. The very nature of financial instruments, from money to stocks, and the infrastructure for any type of transactions is changing – for the better.”

Fact is, I couldn’t agree more. And if you’ve been reading my work here at INO.com, you’ll realize that I’ve been trumpeting the case of financial digital transformation for a long time.

But here’s what surprised me: A staggering 81% of all executives – and NOT just those in FSI – thought that blockchain was both scalable and adoptable. And that percentage goes up even higher when you look at just those in FSI (84%) and FSI pioneers (96%). Frankly, I figured these numbers would be more in the 60% to 70% range.

And when it comes to use cases, I was even more pleasantly surprised: About 80% of executives thought that blockchain made for compelling business cases AND would drive new revenue streams. That means that companies see the top-line sales potential of blockchain, an obvious key to getting everyone in an organization on board.

So, what if these executives just sat back and ignored blockchain? Well, the pain points would pile up: Three-quarters of all executives thought they’d lose competitive advantage. And nearly all (97%) of FSI pioneers thought they’d do the same. In other words, everyone knows that they ignore blockchain only at their own peril. 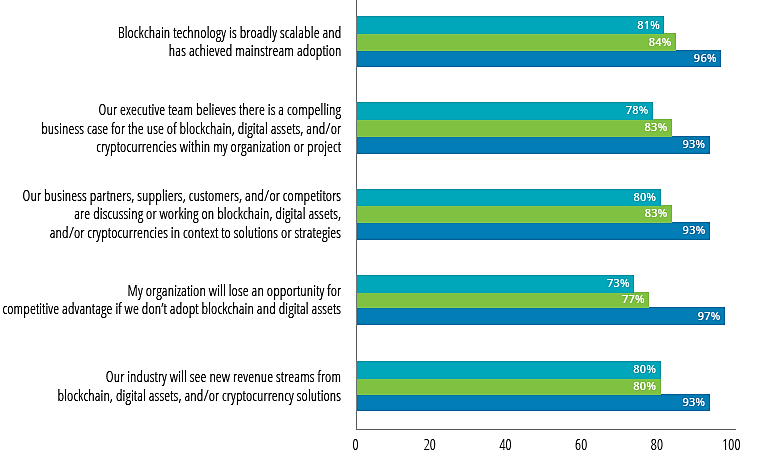 Fiat currency is hard to manage, prone to manipulation, not very accessible, and can pretty much devastate an economy in the blink of an eye. So, for many of us who’ve been around finance for a while, the use case for fiat currency lost its glimmer a while ago. And now, as blockchain has developed, fiat is looking like a has-been more and more often.

And I’m not alone here: Nearly 80% of all executives think that digital assets will replace fiat currency within the next 10 years. And that number climbs to a whopping 94% of FSI pioneer executives. The survey sums it up nicely...

“The end of physical money as we know it represents an overdue – and now inevitable – upgrade.”

That’s right – an “inevitable” upgrade for fiat is pretty much right around the corner for all of us.

In addition, nearly 80% of overall executives and FSI executives thought that digital assets will be “very or somewhat important to my industry in the next 24 months.” I thought that the time horizon would be much, much longer.

The survey was also sobering. Executives see cybersecurity as the biggest obstacle: Nearly three-quarters of all respondents pointed that out. The next biggest complaints were about regulatory barriers (63% overall, 73% FSI pioneers) and financial infrastructure (62% overall, 64% FSI pioneers).

But what was interesting was that among the FSI pioneers – executives who are already working with blockchain – obstacles to secondary markets were about 15% more of a pain point than overall executives. That’s an indication that managing digital asset trading after initial primary markets offerings is on insiders’ minds more than others.

All told, the latest survey from Deloitte reinforces the important position blockchain is making in our lives. And if you’re feeling it, take a look at the survey itself. It’s not too lengthy and is pretty easy to understand. You can download a copy here.

One thought on “Inside The 2021 Blockchain Survey!”