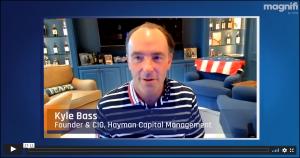 Melissa Francis
Welcome everyone. Today, we are here to talk about Magnifi by TIFIN, a marketplace where you can harness real-time proprietary data to help individual investors and financial advisors fund, compare, and buy investment products like stocks, ETFs, and mutual funds, and model portfolios, to grow and preserve your wealth. I'm Melissa Francis, I know a little bit about this subject matter. I'm a former CNBC, MSNBC, Fox Business, and Fox News anchor. There is probably no more important conversation during these volatile times right now than what drives the economy? Joining us today is hedge fund manager and founder of Hayman Capital Management, Kyle Bass.

Kyle, thank you so much for being here. These are really turbulent times, today alone we have just watched the market seesaw. Everybody was ready to, they were sick to their stomach through the whole weekend, waiting for today, but I'm glad to have you on today, because you've made some really key calls in the past during times like this. You made a great call in subprime, China. You've made a lot of great calls in energy. Overnight, as you know, oil hit a 14 year high. This morning, though, oil was trading off as Germany came out and said they are not prepared yet to halt Russian imports. Oil just got slapped on that, but who knows what's going to happen next? What's your take on all of it?

Kyle Bass
Wow. Well, first of all, it's a pleasure to be here. Good to see you, Melissa. Look, I think that it's tough to predict what each sovereign's going to say and do, day to day. But I think looking at the secular trend, looking at the mistakes, big policy mistakes that the Germans and the Europeans, and therefore, I guess on a later date, the US has made. The desire to immediately switch, i.e, turn the switch on for alternative energy and turn the switch off for hydrocarbons, that desire's intense. And that desire has really manifested itself over the last handful of years. And historically, when we moved to coal, and then we moved to natural gas, and moved to crude, those energy transitions have taken 40 to 50 years. Think about this, we've been all in as a, let's just say the West has been all in on alternative energy, on wind and solar, for the last, I think, 10 to 12 years. And we're not even a 3% of global production of energy.

So it's important to note that this is going to take many, many, many decades. In the meantime, we're going to continue to hydrocarbon demand grow. So for the last six or seven years, we have starved hydrocarbon capex all over the globe, in the interest of converting immediately to alternative energy. I run a conservation based private equity firm, I care very much about, let's say the climate, global warming. I care about everything that we talk about every day. But we also have to live in the reality of how to make that transition as seamless as possible, and I think that's the disconnect that we're seeing manifest itself in price today, Melissa. I think we have a secular problem with supply, and I think that we're going to have to come to some reckoning, realizing that this war, this awful humanitarian disaster that Vladimir Putin has brought upon the world, is not the real reason we're seeing crude at a $130. All he did was speed it up. We have a secular supply problem that we've got to address very quickly.

Melissa Francis
Yeah. And events come on like this, as you said, and it shows that this dramatic shift that we've tried to make, it comes up and bites you in the ass. And then we have our officials going down to Venezuela over the weekend, and trying to make deals with those, any other day we would be saying are despots, are governments we wouldn't deal with. Kyle, another thing that jumps out at me is that oil is fungible. And just because we say that we are not going to buy Russian oil, someone else will, and the oil just goes around. And then you look at, you talk about environmental projects, the amount of oil that would have pumped through the Keystone XL Pipeline exceeds what is sent to us by Russia. So we make these sanctimonious decisions at different points in time that we're not going to do this and that. And it ends up costing something down the road that we also find to be morally unacceptable, as in not having enough power to step in and do something about Ukraine. Your thoughts.

Kyle Bass
Yeah. You put it perfectly there. I think that this is not a problem, or say a puzzle, where the pieces are obvious and they're going to fit together perfectly. This is a very difficult leadership policy driven problem that we and the West has to take a much more constructive approach to. Again, you have Germany turning off their nuclear plants because they don't think they're green. And at the same time, spooling up coal fired power production, because all of a sudden, they now rely on Russia for their power. It's insanity. Whoever's been running these countries has made these sanctimonious choices, and they've been really poor long-term decisions for their constituencies, and truthfully, for the globe. I personally think small modular nuclear is the greenest way for our world to move forward.

Imagine if we stop flying airliners after two of them crashed, where we'd be today? We're nowhere near the old technological problems that we had with Chernobyl and Three Mile Island. We have really, really advanced technology today, and small modular nuclear is the answer, in my opinion, really solving the climate crisis, and getting us to a path of sustainability. So I think that's where we're going to end up, Melissa. It's just going to take a $150 crude to convince everyone that they really made bad decisions, and that it's not just Vladimir Putin's fault, on the energy side. I'm not defending him at all for his humanitarian disaster.

Melissa Francis
No, but we're talking about energy. No, you're absolutely right on the nuclear side, and it has such a bad name. It's really hard to get people to understand that we're talking about clean energy. I just want to remind them that when they're driving their electric cars, when they plugged them in overnight, most likely they got electricity from coal. So they're actually driving filthy, dirty, coal cars most of the time when it's an electric car, but I digress. Let me ask you about, there was this FT article that caught my attention talking about. So, of course, a lot of the world is so dependent on the Ukraine for food. This is something that I don't think many Americans had thought about before, and especially China is dependent. How does this play into, because there's that relationship between Russia and China. China can have an influence on Russia if they want to, in this situation, and they need the grain and other food stuffs out of Ukraine. How does that play out?