We are living in exciting times with crazy volatility. What strategies can you use to protect your portfolio and leverage these swings?

Melissa Francis sits down with Bryn Talkington, Managing Partner of Requisite Capital Management, and Peter Boockvar, CIO of Bleakley Advisory Group, to look at the market and discuss various strategies. 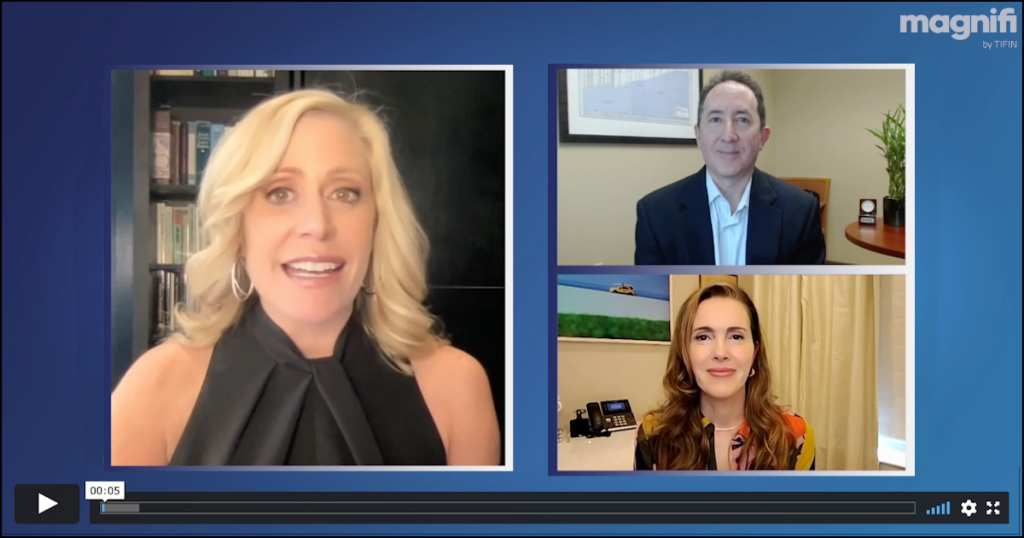 Melissa Francis
Welcome back to Magnifi by TIFIN. Today, we're talking about what drives the economy in these volatile times and what are the best strategies to incorporate into your portfolio right now. Joining us is Peter Boockvar, CIO of Bleakley Advisory Group, and Bryn Talkington, managing partner at Requisite Capital Management.

Welcome to both of you. Boy, we just had a barn burner of an interview with Kyle Bass there. I'm looking through some of my favorite points here. I guess, Peter, maybe I want to start with you because I know that you have been way ahead of the game on gold. That has been a huge play for you as you pilot into your portfolio. Right now, we're seeing multi decade highs. Kyle said that he thinks that the dollar will continue to be the reserve currency of the world, forever, our lifetime. What do you think about that?

Peter Boockvar
Well, I don't disagree. The is whether it still has the same level of dominance. Over the next 10, 20 years, the world is going to use less dollars. It will still remain the reserve currency, but not to the same extent.

I think one of the things that we've seen in tying this into gold over the past couple weeks, and actually even further, when you look back with what has gone on in Canada, is that money in a bank account, it is not as safe as it once was. And you can just ask a Canadian truck driver that might have had their account frozen without any due process. And then, of course you see how the world has weaponized the dollar and the financial system as up against Russia with all these sanctions, and then even the Bank of Russia got sanctioned and they can't even access their overseas reserves.

So gold and having it in physical form is not... You don't take any counterparty risk. It's not someone else's liability. So I think in this new world order, gold as a form of reserve or an asset becomes ever more valuable.

Melissa Francis
So are you adding to your position right here? Or are you taking some winnings off the table since you've been right on this?

Peter Boockvar
Well, 2021 was a very frustrating year being a gold holder. I went into the year, talking about my expectations were higher inflation, and it dramatically underperformed after a good 2020. I think it was the December Fed meeting of 2021 when Powell said, "Yes, we're going to double the pace of tapering." But people realized that even with the rate hikes that he laid out, real interest rates were all going to be well below zero, and that is ever more so this year.

So I think that the [inaudible 00:02:52] we've seen is going to continue further. Now I do want to caution that I don't like buying gold for geopolitical reasons that we're seeing, but I do like buying gold for the fact that I just mentioned earlier, and also inflation that is now ever more a problem and real interest rates continue to go lower.

Melissa Francis
I'm going to ask you more about that in a second, but I want to ask Bryn a similar question based on the Kyle interview. So he was talking about that we have starved basically all of our petroleum investments for cash, and now the chickens are coming home to roost. Bryn, you are somebody who... You were in energy when everybody else was running in the opposite direction. I think it was the summer of 2021. You were getting deeper into the position as other people were saying, "No way, man, I'm walking away from oil. I'm deep in tech." Have you done well with that position? Do you still have it? And what do you do from here?

Bryn Talkington
We're definitely still in the position. I think where our epiphany came in was really in the early summer of 2021, when the IEA, which is a consortium of industrialized countries, as well as independent companies, published their piece called Net Zero by 2050. And it's about a 224 page piece. And when we read through it multiple times, we just felt that facts don't cease to exist just because you don't want to talk about them.

And we felt that the assumptions that they were making about... For example, over half of the new energy we would have going forward in 2040 and 2050 are from technologies that don't exist today.

And another example is the UK in this piece had talked about how they want to only sell EVs by 2030, which really isn't that far away. And so, the UK has around 65 million people. So if the UK were to do that, we did the math, it would take about three-quarters of the global supply of lithium, half of copper, plus these other materials, and that's just in the UK.

And so we felt that, to Kyle's point, the starvation that had occurred in the energy space was really this tinderbox. And so, we ignored what the ESG folks were saying, we ignored that energy was uninvestible, and we put together a strategy that we felt when the facts bore themselves out, that strategy would do really well.

We definitely would have had no idea what would've happened now with Russia, but we still think that this really, to your point you said earlier about Kyle saying this pulls forward, I think the importance also of energy as a security risk. And we in the US have the ability to be not only fully self-sufficient, we can actually over the next couple of years, if we start back up smart energy policy, also be a net exporter.

Melissa Francis
Yeah. No, I know exactly what report you're talking about because I have followed energy for about 20 years. And I was thinking that report was the wouldn't it be nice if report, where there just aren't the resources, this is not possible. And they lay out this plan, the International Energy Agency, and say, "Here we go. This is what we're going to do." And you're like, "Well, that would be wonderful, but there's literally no way to do it." So that was a smart way to get deep in this segment.

I don't know. Did you get nervous, though, as people started to stay home? That's another really big factor, is that we've seen this huge fundamental shift in people not going to as many conferences, they don't want to... I mean, beyond COVID. COVID brought it to the forefront, but now people don't want to go back. So we've seen a lot of different businesses switch to the virtual investor day. There's just not going to be as much business travel probably ever again. Does that change your thought on energy at all? I'm just being the devil's advocate?

Bryn Talkington
Yeah, no. If you think about it, we as a globe consume about 100 million barrels a day of oil. And Russia now... We were already really tight. And our thesis was as the global economy recovers and as people come out of the house, and being down here in Texas, we had been out of our house for almost the whole time. And so, we felt that as the globe came out, that we could get into a scenario that for the first time in history, by the way, there was more demand than supply. Because even if we got up to 102 and 103 million barrels, that just hasn't happened before. And so no, we really leaned into it and took advantage of that volatility to add to positions or new investors that hadn't been in the energy strategy with us before.

Melissa Francis
Okay. I want to ask both of you, and Kyle, I'll start with you. Obviously, there's so much focus on the Fed right now and their dot plot, and what I may start calling their dot plot plus, the idea that they can't possibly follow through on their plan to raise rates because the economy is slowing. Everything that's going on in Russia, in Ukraine, this is something that we heard from Anthony Scaramucci, we heard it also from Kyle Bass. What are your thoughts on this? How far do you think they get down the road into their plan to raise rates, and what stops them? Peter, you go first.

Peter Boockvar
Yeah. Well, the problem that the Fed has, is it's the inflation that is in turn slowing economic growth. And it's now commodity inflation. We know we've seen over the past couple of years transportation inflation, the cost of shipping, and just inflation in pretty much everything. And that is then creating sticker shock and pulling back consumer behavior and slowing growth. And you can assume over the next couple of quarters that the spike in a lot of key prices, particularly whether it's gasoline or it's going to be at the supermarket, we're going to see consumer behavior change. We already seeing that in the housing market where you look at within the Michigan Confidence Survey, plans to buy a car, plans to buy a house have fallen dramatically because prices have just gotten way too high. And while it's positive that wages are accelerating, they're still not keeping up with that pace of inflation.

So that's a difficult scenario for the Fed, is that they will try to raise interest rates to slow the demand side. Because remember, monetary policy, or at least on the Fed funds side, impacts demand. QE basically impacts asset prices. So at least they're going to start by trying to slow down the demand side, to reduce or better calibrate that supply/demand imbalance. The problem is that by slowing demand by just a little, it will be enough to further slow economic growth.

Because one thing that I've argued for a while is that for the last 10 to 20 years, we no longer have normal economic cycles. The Fed has created a situation where we have more credit cycles that are very sensitive to the cost of capital, and these cycles ebb and flow with the cost of money, as we've seen with obviously the housing boom and bust in the mid 2000s. And just look at this recovery from COVID, a lot of it was led by the demand for autos and housing, even though there weren't enough of them to sell.

So by waiting as long as the Fed did, they are going to be tightening into a slower economic recovery, where... I'm sorry, slower economic environment. And then they're going to have to choose. Do they respond to the stag side of the stagflationary type situation, or do they continue to go on and try to slow down the inflation...