I probably don't have to tell you that no matter where you turn these days, everybody and their brother has a new prediction for where the price of Bitcoin (BTC) is headed this year.

In February, I let you in on the nitty-gritty behind investment banking behemoth Goldman Sachs' prediction that Bitcoin was headed to $100K over the next five years. They came up with that number by comparing the market cap of BTC to the market cap of gold. But when we fit our own numbers to their logic and applied a similar calculus, our valuation was even higher. In fact, we came up with a price target of $117K. And even at that, The Bitcoin market was only 1/5 the size of the gold market, still pretty conservative in my book.

Earlier this year, I did a frightening simple analysis of BTC and came up with a price target of $114K. And when I mean simple, I mean simple: I just found the change between the low and high of BTC during 2021. I then applied that change to the opening price of BTC for the year and came up with $114K. We also found that even if the crypto market as a whole, of which BTC is the biggest driver, were to double in 2022, it would still be just 1/10th the size of U.S. stocks. And when you think about it, that calculus is not off the charts by any means.

“Just recently I think bitcoin is going to go to $100,000… I just don’t know where you get that feeling. I can’t put any mathematics to it. I just really feel it from all of the interest. The interest in crypto is so high.” Source

And The Woz didn’t stop there. He also says that Bitcoin is driven by technology that makes its outlook bullish indeed. In fact, BTC is the only cryptocurrency that’s “pure-gold mathematics.” Source

The fact is, I couldn't agree more. Behind the mathematical puzzles that underpin Bitcoin's existence is one immutable fact: There will only be 21 million Bitcoin minted for all of time. And that scarcity, along with its huge market cap and massive brand appeal, will truly make it a store of value for the long term.

Speaking of ground-breaking predictions, I could hardly believe my eyes when I read a recent tweet from Bloomberg senior commodity strategist Mike McGlone about the outlook for Bitcoin. See for yourself: 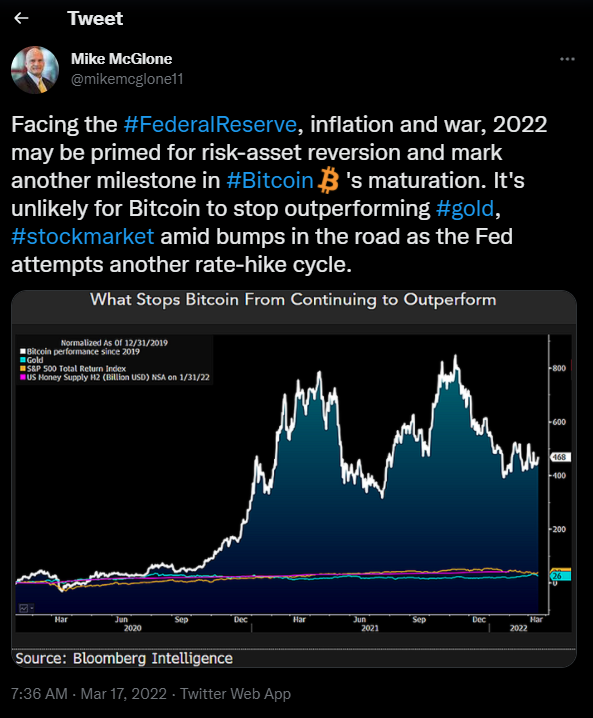 As you can see from the chart embedded in the tweet since 2019, Bitcoin has outperformed gold, the stock market, and the U.S. money supply. And the gist of McGlone's forecast couldn't be more right on: With the pressures of inflation and war, investors are headed to Bitcoin as a safe haven, like gold. And that will likely add to the maturation of Bitcoin as a legitimate alternative for risk-averse investors, especially in times of economic stress and uncertainty.

Speaking of risk-aversion and safe-havens, I was surprised when I dug deep into what’s been happening with Bitcoin, gold, and stocks since the invasion of Ukraine. Here’s what I mean: 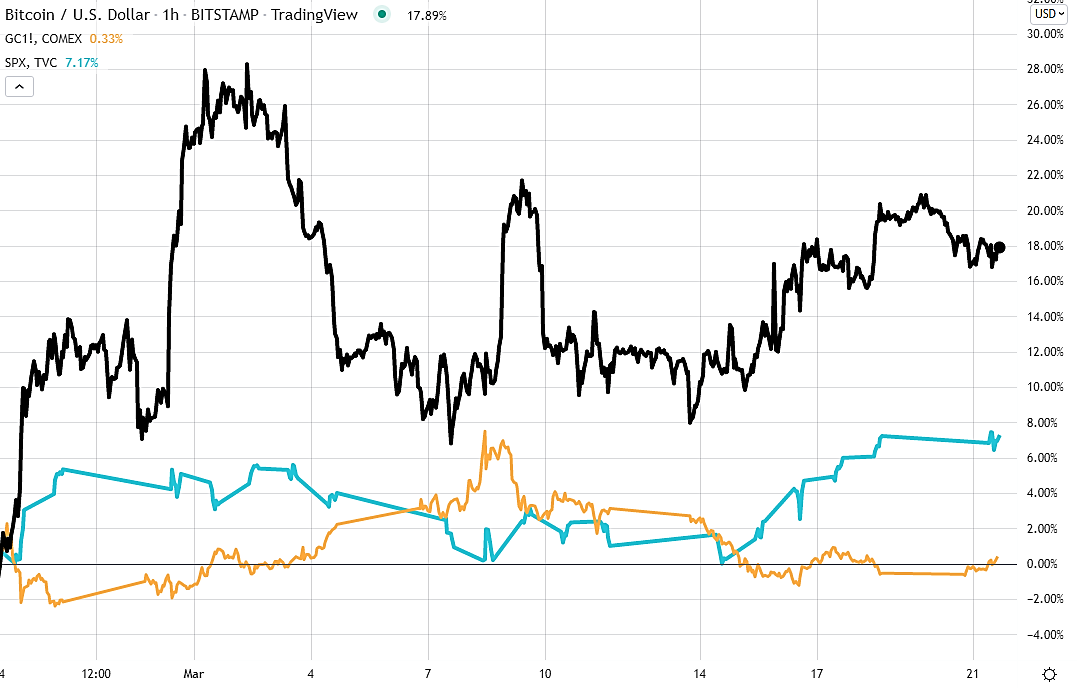 As you can see from this chart, BTC has outperformed both gold and stocks since the invasion of Ukraine on Feb 24. Since that day, gold is flat, stocks are up 7%, and BTC is up 18%. No matter how you slice it, that means that investors are using BTC as a hedge against economic uncertainty, a tell-tale sign of a maturing, safe-haven asset.

This chart also reveals another significant milestone in Bitcoin's development: While not perfect, you can see that Bitcoin (the black line) and gold (the gold line) are positively correlated. That means that, in general, they have tended to move in the same direction over the same time period. And that means that BTC is beginning to behave like the safest of all safe-haven assets, gold.

Now, if you take a look at BTC and gold over a longer time frame, you’ll see less correlation. That means that when investors recently came fact-to-face with a massive load of Ukraine induced economic stress, they opted to protect themselves with Bitcoin as well as gold. And that’s still another significant milestone in Bitcoin’s development.

Hold Tight And Hope For Peace

The invasion of Ukraine is one of the biggest geopolitical shocks to the markets in a long time. But my experience has shown me that over the longer term, these events tend to have less economic impact than we might think. So for me, unless there's been a significant shift in economic fundamentals underlying the assets I hold, I've found the best course of action is to remain in the positive you were in prior to the geopolitical shock.

That said, I personally hope and pray for peace in Ukraine.