I have to admit I almost fell out of my chair when I dug deep into the latest inflation numbers. Compared to a year ago, prices are up a jaw-dropping 8.5%. And in March alone they grew 1.2%. That’s the biggest single-month increase in the last 6 months. And if you look at the trend since the last year, those monthly increases are getting bigger, not smaller.

But that’s not all. If you take a stroll down the different components of the price increases, there’s pretty much nowhere to hide. Compared to a year ago, food is up 9%, used cars and trucks are up 35%, gas is up 48%, and fuel is oil up a mind-numbing 70%. Here are the grisly details in chart form: 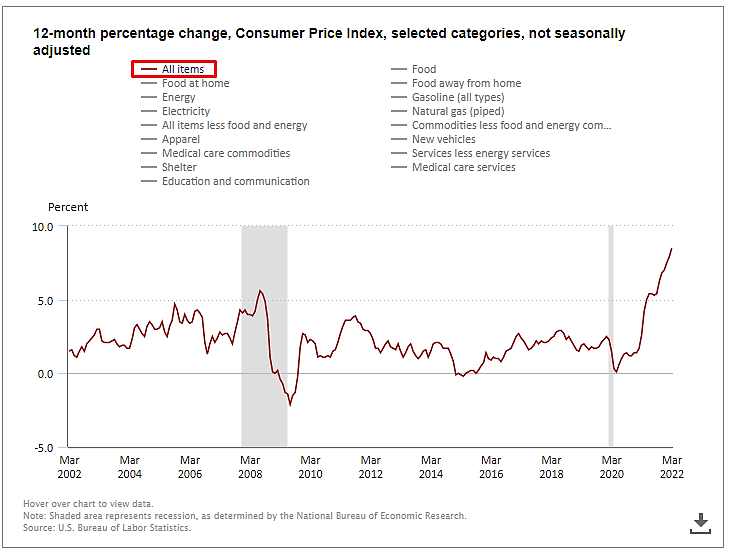 As you can see from this chart, top-line inflation is at multi-year highs. In fact, the 8.5% year-ago increase in March is the biggest 12-month increase since December 1981.

Now, take a look at the same chart, but the more volatile food and energy components stripped out: 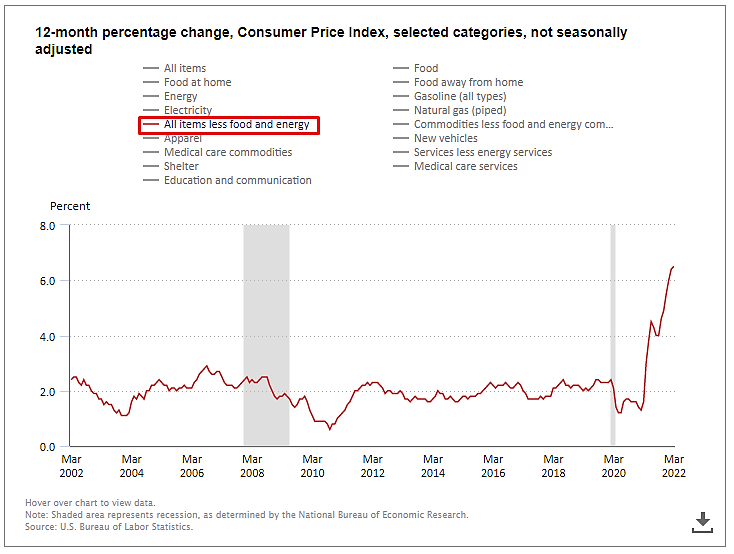 This chart shows that core inflation is also on the rampage, up 6.5% compared to a year ago. In my book, this chart is even more troubling. That’s because it measures so-called “core” inflation, which excludes food and energy. By excluding food and energy, two components we can’t do without, core inflation measure the prices of goods that we don’t necessarily “need.” If they’re rising along with food and energy, it means that inflation has reached far and wide.

So what’s driving these massive price increases? You can take your pick. Supply chain problems driven by lingering covid issues are still the biggest culprit in my book. Why? Because when covid cases spike and manufacturers shut down plants, the output coming out of those factories reduces the amount of products available for buyers. And just like we learned in Econ 101, lower supply means higher prices. The recent surge and lockdown in China is just one example.

Another big factor? Pent-up demand from the two years of covid is a big driver. There’s still a ton of demand out there, and that kind of demand is not likely to put a damper on buying. In fact, the opposite is proving true: When people and businesses see higher prices, they don’t turn off the buying spigot. They just pay up.

In addition, companies of just about every size are getting squeezed by huge labor shortages. And while that’s due to increased demand for products, it’s also due to a more fundamental structural shift in how people approach their working lives.

In fact, I don’t have to tell you that no matter where you focus your lens, the paradigm of what work really means to us is undergoing a seismic shift. And while companies are adding jobs hand over fist, there’s still a ton more work to go around without the people to do it. It’s no wonder, then, that we are in the midst of one of the strongest labor markets we’ve ever seen. And that means that if you want more workers, you’re going to have to pay up here as well. And that translates into more inflationary pressure.

Not all the news is bad. The Fed is already raising interest rates and plans to do so numerous times over the coming year. By using this tool of monetary policy, the Fed makes borrowing more expensive for consumers and businesses. Why does this curb inflation? Because higher interest rates translate to higher loan costs. And if consumers and businesses have to pay more for loans, they’re likely to pump the brakes a bit when they think about borrowing money.

Another positive is that if you look at the core inflation rate on a monthly basis, the trend is positive. For March it stood at .3%. That’s down from the .5% in February and .6% in January. In fact, March’s core number is the lowest monthly core rate since last September. That’s a step in the right direction.

What To Do Right Now

So, what are investors to do right now? As I mentioned in my article here last week, I continue to heed my golden rule: Buy companies that know what they’re doing in markets that have strong upside. And don’t sweat the day-to-day fluctuations in stock price. Let management worry about that.

Since I own companies that still fit my golden rule, I stay the course. That includes all my investments, including stocks, crypto, and other assets. While geopolitical forces are certainly at play right now, experience has shown that these geopolitical shocks don’t have much long-term staying power. They tend to work themselves out over time.

On the other hand, inflation could be potentially more corrosive. So, I keep an eye on what the Fed is up to, especially over the next few months. And I also keep track of both the top-line inflation number and the core number. Let’s see if the core number continues to trend down on a monthly basis.

That said, if you’re looking for hedges against inflation, the old standbys are certainly available. That would include buying companies that are in non-cyclical markets, which are markets that make products that consumers and businesses need no matter what. That includes food, energy, utilities, some consumer products, and pharmaceuticals, among others. But keep in mind that with food and energy at nosebleed levels, you’ll likely be paying a premium for companies in those markets.

Another standby is gold. Since the beginning of the year, it’s behaved like a solid risk-off asset. In fact, a chart of gold against stocks shows a strong negative correlation since the beginning of the year. That’s a clear case for gold as a good hedge against stock market risk. But keep in mind that if you stretch that time horizon farther in the past, the correlation breaks down. So, tread lightly if you’re going to buy gold.

Bitcoin is also on the table. But like I said last week, BTC is still maturing as a store of value. So, while it behaves like gold under some time frames and is a decent hedge compared to stocks, sometimes it isn’t. You just have to keep an eye on it.