I don't know about you, but right now, I'm breathing a little sigh of relief.

And with good reason. Finally last week, we got some good news out of stock market action. And pretty much across the board, the news was positive. Here’s what I mean: 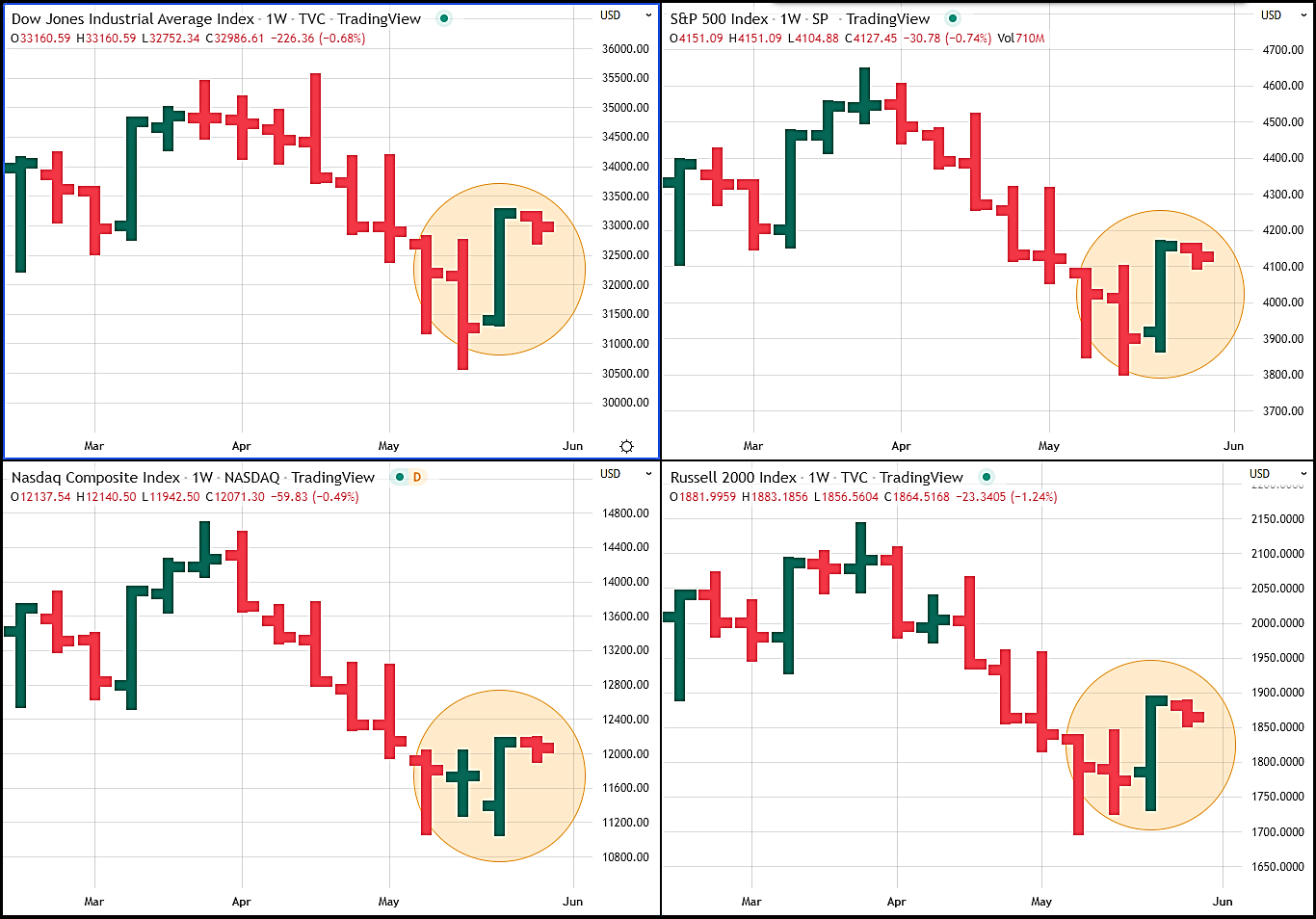 You have to admit that's broad positive action across all equity asset classes. And it's welcome news considering what the markets have been up to over the past two months.

In fact, if you drill down into the above charts, you can see that last week's action in the Dow reversed a weekly trend of downright lousy action: Last week's positive results snapped an eight-week losing streak. The last up week for the Dow was way back on March 21.

So, what happened? First off, there was some decent inflation news: The Bureau of Economic Analysis came out with its inflation score card, called the PCE (Personal Consumption Expenditures), and the results were positive. Core prices, which exclude the more volatile food and energy prices, were up 4.9% compared to a year ago. Those year-over-year numbers were down from the 5.2% in March. In fact, they were the best year-over-year numbers since December 2021.

If you add back in food and energy, you might expect a more depressing story. But the PCE for April, including food and energy, was 6.3%, also down from the year-over-year numbers of 6.6% in March. That's another small win.

Even better, if you take a look at the month-over-month numbers, instead of year-over-year numbers, the inflation story here also shows improvement here as well: The PCE for April was up 0.9%, which compares favorably with March's 1.4%.

Meanwhile, the April numbers also showed that personal income was holding up: It grew 0.4% in April. While that's down from the 0.5% in March, it shows that incomes are hanging in there despite inflation and rising interest rates.

Another plus: The PCE is the Federal Reserve's preferred inflation gauge because it includes more robust consumption numbers. So, when it starts to show improvement, it's another small win.

The positive inflation news from the PCE also comes on the tail of other positive inflation news earlier this month: The more popular CPI (Consumer Price Index). As I talked about in my article explaining why stocks and Bitcoin are down, the CPI fell to 8.3% in April. While that's still sky high, it shows improvement over the 8.5% annual rate in March.

So, all in all, the two positive inflation reports had a positive effect on last week's action in stocks. But it wasn't the only factor that lifted stocks. Here's what I mean: Prior to last week, stocks had been down for pretty much two months straight. That means that last week's solid buying is most likely a reaction to simply lower prices.

Why is that important? Because it means that, at least for now, there is solid evidence that prices can decline to a point where they become attractive. When that happens, buyers step in and lift the market. The last thing you want to see is the opposite: The inability of lower stock prices to entice buyers to buy. That most certainly leads to new and more dramatic lows.

That being said, we are certainly not out of the woods yet. And last week's action could simply be a bear market rally of sorts. That means it could be just a momentary pause in an otherwise bearish downtrend. There's no way to tell right now. You just have to wait and see.

And when it comes to Bitcoin (BTC), there’s no doubt that Bitcoin is getting hammered like there’s no tomorrow. But I’m not surprised: As I’ve mentioned previously, BTC is not yet behaving as either a store of value or a hedge against stock declines. Right now, it's behaving like a risky asset of the highest sort. And in this current volatile environment, those risky assets are going to get sold big-time.

As a result, despite the positive action in stocks last week, BTC failed to put together a positive week. In fact, last week's decline capped the ninth straight decline for the flagship cryptocurrency.

Here’s What to Do

Continue to heed my golden rule: Buy companies that know what they're doing in markets with strong upside. And while in the past, I've cautioned against adding to any existing positions, I'll probably start nibbling on my target stocks and positions if we get some follow through on last week's positive action. That likely means I won't make any moves until I get at least two or three weekly positive bars. And then I'll add lightly. And as far as crypto is concerned, I wouldn’t be adding anything new. And I would certainly maintain just 1% to 2% of all my holdings in crypto, including BTC.