This is the world we live in today: Stocks are priced as if the global economy is booming, while the bond market is priced as if we’re in a worldwide depression.

Nowhere is this truer than in Europe, where stocks are at or near record highs while yields on sovereign bonds are at record lows, below zero in many cases.

Of course, we’re neither in a boom or a bust. While we’re closer to the former in the U.S., we’re a lot closer to the latter in Europe. The bond market in Europe is telling us that the euro zone economy’s in the tank, which is much closer to reality, while the stock market there is now trading at a seven-year high. END_OF_DOCUMENT_TOKEN_TO_BE_REPLACED

Greece has once again "kicked the can down the road," but they may not be out of the woods yet according to the European Commission, European Central Bank and IMF, who have all warned Greece that action speaks louder than words.

That brings me to the point of today's blog posting, and that is action speaks louder than words. In our case, it is market action that speaks louder than Fed Chairwoman, Janet Yellen, or any other verbiage that comes out of a politician's mouth. 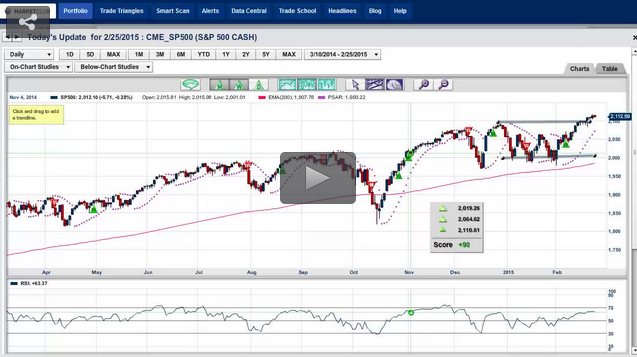 With that thought in mind, I'm going to take a look at the market action for all the major markets today, with a special look at gold (FOREX:XAUUSDO). I'll give you three reasons why you should be watching this market.

It would appear at the moment that many of the world’s disruptive events like Ukraine, Greece and the Middle East are all in a temporary recessionary mode at the moment. That leaves the markets themselves to determine their trends. Market action will always point the way to the next big moves as opposed to words and promises from world leaders.

OK, so it’s not the most original headline. But it reveals the thinking of some savvy investors, and I think they have a good point.

Baron Rothschild, the 18th century British nobleman and member of the Rothschild banking family, is credited with saying, “The time to buy is when there’s blood in the streets.”

I haven’t heard that there is actual blood running in the streets of Athens or other Greek cities, but it’s pretty close, financially speaking, which means it may be time to be buying Greek bonds.

We all know by now that after taking the most seats in the January 25 parliamentary election, the left-wing Syriza party formed a coalition government with the small right-wing Greek Independence Party. The one thing the two have in common is opposition to anti-austerity measures imposed on Greece by the European Central Bank and European Union as conditions for earlier financial bailouts and more in the future. There is also the fear that the Syriza-led government wants to secede from the EU, although that seems unlikely to happen.

Not surprisingly, investors have fled from Greek assets in droves and pulled their money out of Greek banks.
The Athens Stock Exchange General Index, or ASE, has tanked more than 40% since last March, nearly 13% since the election. Government bond prices have likewise plummeted, sending yields soaring. The yield on the 10-year bond jumped more than 200 basis points after the Syriza win and now yields more than 11% as of Friday. END_OF_DOCUMENT_TOKEN_TO_BE_REPLACED

While the worlds investing community continues to concentrate on what is happening in Europe, due to the recent quantitative easing recently announced by the European Central Bank, you may be wondering how you can play the situation.

What is Going on in Europe?

But before we get to how you may be able to profit, let's look at what is happening. Last week the European Central Bank announced they would buy 60 billion Euro worth of bonds each month until the end of September 2016. This will essentially put 1.1 trillion euro into the European economy in an effort to help it get moving again. The quantitative easing process injects cash into an economy (increasing the money supply) which keeps interest rates low, making it easier for consumers and businesses to borrow, in the hope they will do so and boost economic growth. END_OF_DOCUMENT_TOKEN_TO_BE_REPLACED

I don’t know if Mario Draghi’s “historic” quantitative easing program announced Thursday will do anything to help the flat-on-its-back euro zone economy.

I’m not a trained economist, so I’m not sure exactly how buying massive quantities of already overpriced bonds is supposed to raise inflation and boost the economy, although it has been very successful in devaluing the grossly overpriced euro. But how is a cheaper currency going to help countries in the euro zone when they do most of their trading with each other?

What I am sure of is that the program will make U.S. Treasury and corporate debt securities a lot more attractive to investors, further lowering long-term interest rates here, and giving our economy, now the envy of the rest of the world, another boost.

It’s about time Europe did something for us. END_OF_DOCUMENT_TOKEN_TO_BE_REPLACED