With the S&P 500 (SPX) ending the year up 28.9%, the Dow Jones Industrial Average (DJI) rose 22.3%, and the NASDAQ (IXIC) increased by 35.2% in 2019, much of the year it felt like no matter what you were invested in you were making money. And for the most part, that was true. Some investors made more than others because they had picked what would become the ETF winners of the year.

Did you see market returns, or were you invested in the ETFs that beat the averages and in some cases by a lot? Let’s take a look at the top five best performing ETFs of 2019 in several different categories the average investor has to choose from.

The following table shows the performance of the top five best performing ETFs in 2019, as well as their performance over the last month, the previous three months, the last five and ten years.

The following table shows the performance of the top five Non-Leveraged ETFs in 2019, as well as their performance over the last month, the previous three months, the last five and ten years.

The following table shows the performance of the top five Equity Non-Leveraged ETFs in 2019, as well as their performance over the last month, the last three months, the last five and ten years. END_OF_DOCUMENT_TOKEN_TO_BE_REPLACED

The table below is a list of the 25-top performing ETFs over the last ten years. As you will see, the majority of the Exchange Traded Funds on this list produced returns of 15% or more on an annualized basis, with the top ETF returning more than 19% a year on average over the past decade. That would equate to roughly a 250% return before any dividends or fees. 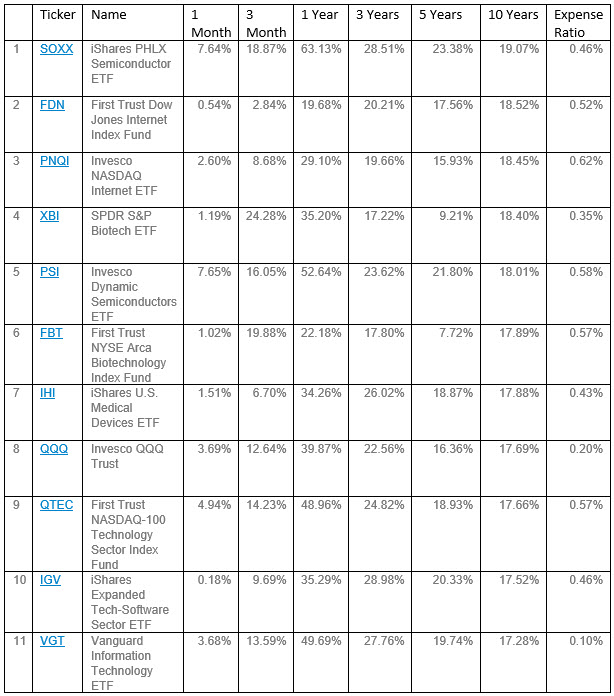 END_OF_DOCUMENT_TOKEN_TO_BE_REPLACED

This past Thanksgiving, millions of Americans sat at the dinner table and proclaimed what they were thankful for. For some, it was loved ones, new family members, a promotion at work or a new job altogether, but at the very least, the food that was about to be eaten was mentioned. The success of the stock market in 2019 was undoubtedly one of mine, but I may be in the minority when it comes to people who said such out loud.

However, that means 46% of the time stocks were more than double digits below their highs. END_OF_DOCUMENT_TOKEN_TO_BE_REPLACED

Roughly 2.5 billion people around the world play video games, which includes two out of every three Americans per research from the newest Exchange Traded Fund manager Roundhill Investments. Deloitte's research showed $4.5 billion was invested in the eSports industry in 2018 alone, which represented an 818% increase from 2017. Currently, 454 million people watch eSports events, and estimates have that number growing to 645 million by 2022. The global gaming market is expected to hit $152 billion by the end of 2019, a 10% year-over-year growth rate.

The rise of multiplayer battle royale games such as ‘Fortnite,’ increased technology, which includes higher internet speeds, virtual reality headsets, increased processing power. It’s also ushered in the ability to allow gamers to use multiple devices to access games that have been key drivers in changing the industry. In the past, the industry relied on single gaming consoles sales or single games to bring in all the revenue. Today we have in-game purchases; massive esports arena’s selling out for tournaments, advertising revenue from watching streaming video of other players competing in games.

While the video gaming industry has been around for decades, the investment opportunities have never been as good as they are today, especially because from most accounts, it would appear the next catalyst for growth is still in its infancy stages today.

Currently, five Exchange Traded Funds focus on the gaming industry and allow you the opportunity to buy into this industry that could see massive growth over the next decade. Let’s take a look at your options. END_OF_DOCUMENT_TOKEN_TO_BE_REPLACED

The Thanksgiving Holiday of 2017 was right around the time when most casual retail investors first began to hear about Bitcoin and cryptocurrencies. What ensued is why we all still talk about Bitcoin and what most believe permanently put Bitcoin on the map.

The price moves from slightly before Thanksgiving 2017 until the end of the year in 2017, where what Wall Street dreams are made of. Bitcoin went from $5,000 a coin to $20,000 a coin in just a few weeks. Early Bitcoin adopters were made millionaires in only a few weeks.

The Bitcoin bulls will tell you that Bitcoin has a history of big rebounds after big drops. While I fully agree with these statements, the problem is that no one knows when the big drop is over. Furthermore, most of the past declines came after the coin was simply overvalued, or a big catalyst had and gone. The recent drop followed a move from the Chinese Government increased its cracked down on the cryptocurrency industry. END_OF_DOCUMENT_TOKEN_TO_BE_REPLACED