But when German inflation is on the rise, then the trauma Germany experienced from the inflationary crisis of the 1930s comes rushing back. Then the Bundesbank’s stance becomes hawkishly vocal and relations become strained. So, what has caused Germany’s Bundesbank to “raise its voice” this time around? This time, it's a bit more complex than just inflation. END_OF_DOCUMENT_TOKEN_TO_BE_REPLACED

The year 2017 is just around the corner and it seems that more troubles are brewing for the Eurozone. The region faces a deadly combination of a premature ECB taper, Fed tightening and more political uncertainty. Together, those factors could disrupt the already fragile Eurozone recovery.

Mario Draghi, the ECB President, so far has proved (and more than once) his ability to stabilize the Eurozone economy and delicately navigate monetary policy. But, in the latest ECB rate decision, which was also the last for 2016, Mario Draghi may have slipped up and acted a bit too hastily. Draghi declared that the ECB would reduce its monthly bond purchases from the current pace of €80 billion a month to €60 billion, beginning in April 2017. Despite constant denials from the ECB, there is simply no other way to interpret Draghi’s declaration but as a tapering of the ECB’s Quantitative Easing program. And, in the world of monetary policy, especially ultra-loose monetary policy, less stimulus equals tightening.

The ECB is effectively rolling back part of the brakes it has used to curb volatility in the Eurozone debt market. When the Greek crisis loomed, the ECB used QE to curb volatility. Likewise, when the Spanish banking crisis erupted and, as of late, with Brexit and the Italian banking crises, the ECB quickly responded. The ECB’s massive QE program helped restrain the shocks to the system. END_OF_DOCUMENT_TOKEN_TO_BE_REPLACED

What do you think would be the "perfect caption" for this photograph of Mario Draghi and Angela Merkel? 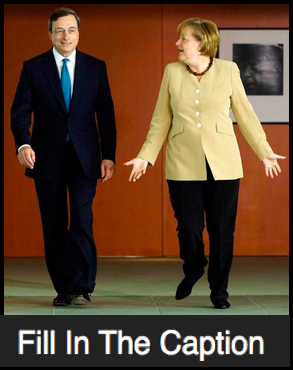 Here's my caption:
"But Mario, why won't you dance with me!!"

Leave a comment with your caption. Enter as many captions as you wish and have fun!

For a good chuckle, be sure to read some of the captions from previous Fill In The Caption pictures.

By David Sterman of Street Authority

At this point in President Obama's first term, the world looked very different.

The still-anemic economy made it hard to fathom how we would ever get out from under a crushing government debt load. Government spending far surpassed revenue and concerns grew that our key financial backers (such as Chinese bondholders) would pull the rug out from under us.

Fast forward to 2015, and the notion that our national debt is any sort of real problem has simply vanished. Sure, the Republican party has been recently threatening government agency shutdowns, but this time the issue is immigration and not our nation's unstable finances. The percentage of Americans that believe that deficit reduction should be Washington's top priority has slid to a recent 64%, from 72% in 2013, according to a recent survey conducted by Pew Research.

However, events across the Atlantic Ocean could bring this issue right back onto the front pages. END_OF_DOCUMENT_TOKEN_TO_BE_REPLACED