If financial market participants were voting, Jerome Powell would likely win a resounding second term as Federal Reserve chair. He would also probably be approved by the Senate, but that would assume President Biden nominated him. Unfortunately, that's become less likely to happen.

The latest straw against him was the trading scandal that led to the resignation of two of the Fed's 12 regional bank presidents. While the Fed last week announced new restrictions on trading to prevent this from happening again, it also brings the scandal back into the public eye at the worst possible time for Powell, whose terms end in February. While he certainly can't be blamed for the deeds of others—especially when they happened at the Fed's regional banks, not the Fed itself—and he deserves credit for acting swiftly and decisively in their wake, the fact is that they occurred on his watch. As a result, he won't be able to deflect all of the blame.

More to the point, it exposes how cozy the Fed is to the financial markets when its officials are supposed to be purer than Caesar's wife. While Powell probably didn't know about those two Fed presidents' trades beforehand, the episode makes it look like the Fed chair isn't in charge of his own house. END_OF_DOCUMENT_TOKEN_TO_BE_REPLACED

In case you missed it, last Friday, the Federal Reserve agreed to let a year-long suspension of capital requirements for big banks that allowed them to exclude Treasury securities and deposits held at the Fed from their supplementary leverage ratio expire at the end of the month.

While the subject of bank capital ratios usually puts some people to sleep, the Fed decision could have very real consequences for the financial markets and the nascent economic rebound at large. It also seems to diverge from the Fed’s own stated and oft-repeated monetary policies.

Then again, the Fed may have just sent a subtle message that its low-rate stance is about to change.

As the New York Times explained, the intention of relaxing the banks’ capital requirements last year at the outset of the pandemic-induced economic lockdown “was to make it easier for financial institutions to absorb government bonds and reserves and still continue lending. Otherwise, banks might have stopped such activities to avoid increasing their assets and hitting the leverage cap, which would mean raising capital. But it also lowered bank capital requirements, which drew criticism.”

At a practical level, Friday’s decision may add further fuel to the fire that is driving up bond yields by discouraging banks from buying Treasury securities, which would seem to run counter to the Fed’s low-interest-rate policy. The Fed, of course, is buying trillions of dollars of Treasury and mortgage-backed securities, which it has stated it has no intention of stopping. Yet, it saw fit to make a move that could have the effect of driving the banks – also big buyers of government securities – out of the market. So why did the Fed do this? END_OF_DOCUMENT_TOKEN_TO_BE_REPLACED

When then-President-Elect Joe Biden nominated Janet Yellen to be his Treasury secretary last month, the markets rejoiced. The former Federal Reserve chair was a known quantity, and investors hate uncertainty – they knew what they were getting. Even better, they liked what they were getting—a monetary dove who favors low-interest rates and supports an interventionist government and Fed. While she wouldn't be on the Fed in her new role, she still holds the same views.

Moreover, since she is Jerome Powell's immediate predecessor, and they both worked together on the Fed for several years, it was pretty much a given that the two will work closely and harmoniously together for the good of the country, as the times demand.

But the markets were also relieved that Biden did not bow to the so-called progressives on the extreme left of his party and pick someone more to their liking, instead choosing someone with safe, relatively moderate views that both parties could support – as indeed they did, by an 84-15 Senate vote. In other words, Biden wanted – and the markets demanded – an adult in the room, and that's what they got with Yellen.

For the better part of the past four years, we've had to listen to the chattering classes defending the sanctity of the independence of the Federal Reserve. President Trump was routinely lambasted for constantly criticizing Jerome Powell, while several of his other nominees to the Fed, such as Herman Cain and Steven Moore, were deemed to be too cozy to Trump to warrant consideration. Both of them withdrew their nominations for other reasons, but it appeared that their nominations were DOA. For the same reason, the confirmation of the "controversial" Judy Shelton looks like it is going to die on the vine because she's been portrayed as Trump's lackey.

Yet now we have the prospect of Janet Yellen, the former chair of the Fed, being nominated as Joe Biden's Secretary of the Treasury. If nothing else, that will basically put the nail in the coffin of the notion of Fed independence. Does anyone seriously doubt that the Treasury and the Fed will be joined at the hip when the two most recent Fed chairs head those two agencies?

Yet that prospect probably won't be an impediment to her being confirmed by the Senate—on the contrary. The markets greeted Yellen's nomination with absolute euphoria, as well they should. The prospect of the Treasury and the Fed working more closely together in a time of crisis is certainly a reason for optimism. And it's certainly good for my portfolio, so I'm not complaining. But lost in all of the jubilation is that the idea of Fed independence has gone by the wayside, and nobody seems to give a hoot.

This is certainly not a bad thing. The whole idea of Fed independence was always suspect. The Fed is no more independent than the FBI or the Energy Department. It's just another branch of the government that arguably should always work in tandem with the Treasury for the betterment of the U.S. economy and usually does. Yet someone created this fiction that the Fed is somehow the moral equivalent of the Supreme Court and above politics. END_OF_DOCUMENT_TOKEN_TO_BE_REPLACED

Once again Janet Yellen, the chairwoman of the Federal Reserve, gave the market yet another easy money "fix". Easy money is the drug of choice for this market and has been for the past six years. Can the insanity of printing more and more money keep going on and on, or will the market have to go into rehab and kick its easy money dependency? Only time will tell. Eventually someone, and that means all of us, will have to pay the piper. 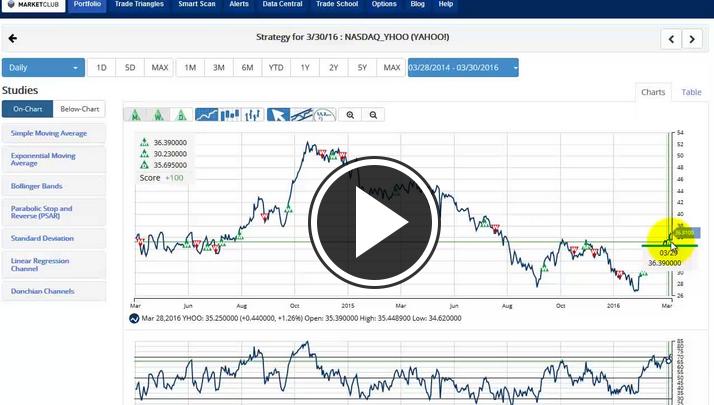 As of today, many stocks, including the major indices, remain locked in broad trading ranges. This could all change as we come to the end the first quarter and move into April. END_OF_DOCUMENT_TOKEN_TO_BE_REPLACED