Now that the Dow and S&P 500 have blown through their 2002 bear-market lows and regressed to levels not seen since 1996, technical analysts are revising their targets downward.

Based on Fibonacci and Elliott Wave theory analysis, the next level of chart support for the S&P 500 would be 640, according to Mark Arbeter, chief technical strategist at Standard & Poor's. That's down 5.40% from Monday's close of 676.53.

Although chart support levels show areas of significant buying in the past, and the uptrend line has served as a floor for the past 77 years, Arbeter says the behavior in this market differs from other bears. 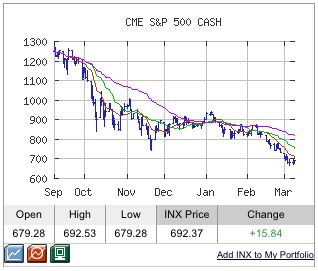 Unlike in the past, the market appears to be a lagging indicator rather than a leading one.

"It's not properly discounting the bad news that keeps coming out," Arbeter added. "All the surprises over the last year have been downside surprises. The fundamental community continues to play catch-up on the downside."

"Our up/down and volume momentum indicators have been oversold since May, which suggests there's still selling pressure coming into the market even when there are rallies," Yamada said. "The market is suffering from deleveraging of 30 to 40 times leverage that took place over the past few years."

The bottoming process between 2002 and 2003 took at least a year, during which technical indicators improved. But there are no signs of such improvement now, Yamada says.

Today's stock market is commonly referred to as the worst since the Great Depression. If the 1930s bear market — in which the Dow plunged 89% — serves as a road map, we're halfway to the light at the end of the tunnel. That bear market lasted 34 months from peak to trough. This bear is in its 17th month.

The market's recent action suggests hope has waned that government stimulus plans will keep this bear market from being as bad or lasting as long as the 1930s bear.

In fact, some government action may be making it worse. Eliminating the uptick rule for short selling on July 6, 2007, has sent the market tumbling harder than in the past, argues Adam Hewison, co-founder of Marketclub.com.

The uptick rule for short selling, established by the SEC in 1934, required that every short sale be entered at a price higher than that of the previous trade. It aimed to prevent short sellers, who make money when stocks fall, from adding to the downward pressure of a falling stock. "With the uptick rule, (short sellers) couldn't pummel companies as quickly," Hewison said.

Hewison's long view: The market will sputter sideways until the next super bull cycle starts sometime between 2018 and 2020. "This isn't going to be the V-shaped turnaround that everyone thought it was going to be," he said.

How to tell or refer a friend (short video)