Brownouts and blackouts are terms that describe the gradient of power loss, from limited in scale and time and transitioning to total darkness, with no idea of when the loss of power will subside. Valentine’s Day week 2021, Texans were told that ERCOT had not prepared for the deep cold that centered on Texas, and reserves for fueling power plants either were stuck in frozen pipes or just were not available. As a result, 151 people lost their lives due to exposure or other related effects of that storm.

This week, as we begin the first full week of June, we hear those same words, but this time we’re hearing them for the entire country. We all are asking how can we be here again and when will it happen? We’ll address these today in this article.

Let’s look at a graph: END_OF_DOCUMENT_TOKEN_TO_BE_REPLACED

I was asked last week, after our series on gasoline and diesel prices and how high those prices could go, my thoughts on the price of Natural Gas, and where they could go.

I have been following Natural Gas prices and Natural Gas inventories for years, so I went to my trusty charts and began to piece together a narrative.

Just this year alone, the price of Natural Gas has doubled. We started the year at $3.73 per million cubic feet (MMCF) and closed business yesterday, at $8.796 per MMCF. Here’s that
price chart: 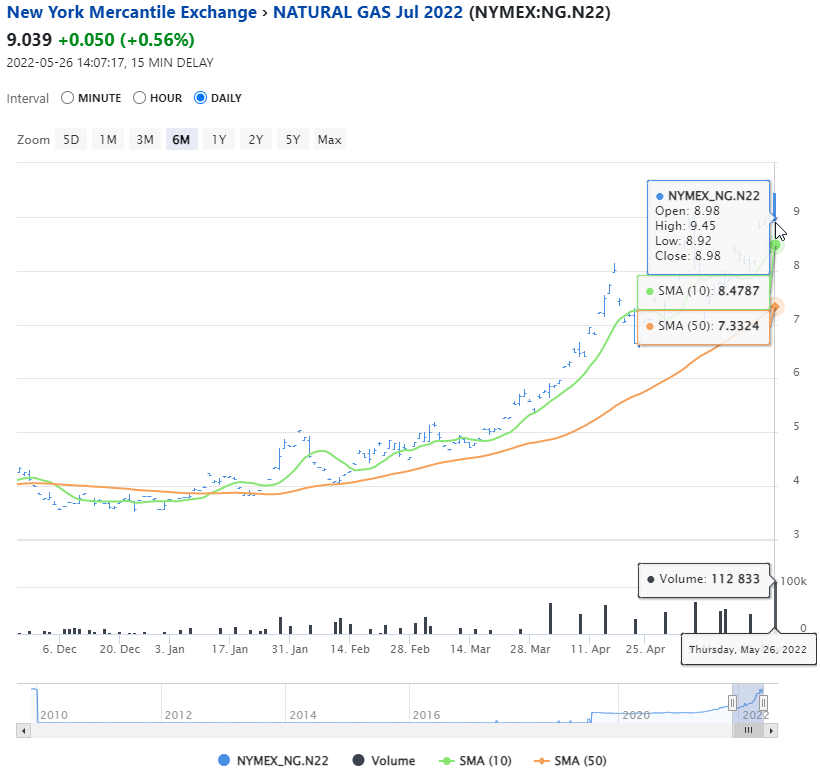 I also looked at the inventory chart for Natural Gas from the Energy Information Agency. That chart showed me that natural gas inventories are starting to trend toward the lower end of the five-year average. END_OF_DOCUMENT_TOKEN_TO_BE_REPLACED

In September, the price of natural gas fluctuated more than we had seen since February of this year and it's likely that while some investors made vast sums of money, others lost just as much, if not more. But what made September so crazy was that natural gas made a significant reversal right in the middle of the month.

The price of the United State Natural Gas ETF (UNG) ended the month of August at $23.95 and closed at $24.83 on the last trading day of September. That move represents a 3.6% increase, not an insignificant amount but also not making anyone piles of money. But, while the price of natural gas started the month at $23.95, its lowest closing price for the month came on September 14, where it bottomed out at $22.69. Had you been watching the price, recognized this was the bottom and bought on September 14 or 15, you could have made yourself a nice 9.4% gain (the gain would be higher if you continued to hold for a few days at the beginning of October).

Again though, a 9% gain is a good return, but not necessarily what I would call “rolling in the dough.”

In order to make that kind of money, you would have had to use leverage. If you had purchased shares of the VelocityShares 3X Long Natural Gas ETN (UGAZ) at the close of September 14 and sold them at the close on September 28, you would have made a sweet profit of 30%. (Again, this would have been even larger, upwards of 50% if you held onto your UGAZ the first few days of October.)

Why did UGAZ perform so much better than UNG? Well, that is because UGAZ is three times leveraged natural gas fund, meaning it gives your three times the return of natural gas if the commodity moves higher. The flip side of that is you can lose three times the amount of money if natural gas prices fall while you hold the shares. END_OF_DOCUMENT_TOKEN_TO_BE_REPLACED

By: David Goodboy of StreetAuthority.com

I love finding stealth rallies in the financial markets. These under-the-radar moves higher are ignored by the financial media and therefore by most investors.

Stealth rallies occur for any number of reasons. Primarily, these types of upward moves happen in commodities or stocks that have been beaten down for so long that the public simply loses interest in them.

A stealth rally starts by attracting the attention of only the most die-hard followers. These early investors quietly pocket huge gains while the rest of the investment community is chasing the latest hot stocks or futures.

Right now, a stealth rally is taking place in a commodity that has not been in the headlines for a while. Once a darling of the financial media, this commodity has been beaten down so severely it is rarely mentioned in the daily financial press. After being hailed as the savior of the United States' energy future, this commodity quickly became over-produced. It may have succeeded in revitalizing U.S. energy, but its price continued to plunge lower as the years passed.

In case you haven't guessed it, I am referencing natural gas. The widespread use of fracking created an oversupply of the commodity, resulting in a price plunge.

Recently, however, things have changed. Natural gas is in the middle of a monster upward rally and it's not too late to jump on board.

Allow me to explain. END_OF_DOCUMENT_TOKEN_TO_BE_REPLACED

The National Oceanic and Atmospheric Administration (NOAA) reports cooling degree day (CDD) data for every seven-day period by state. From that data, they construct a populated-weighted national total.

Example: The high temperature for a particular day was 90°F and the low temperature was 66°F. The temperature mean for that day was: END_OF_DOCUMENT_TOKEN_TO_BE_REPLACED