Next Tuesday will be Consumer Confidence, and that too seems to have bottomed in Feb and March 09. The two, five, and seven year auctions will be held next Tues through Thursday, and on Wednesday there will be another FOMC meeting. Generally speaking, treasuries have remained under pressure until the auctions end on Thursday. If pressure resumes this week on favorable economic data, it could extend into Wednesday/Thursday of next week, quite easily. Below, I incorporate a smattering of charts showing economic data, which will be followed by the intraday 10 and 30 year charts. 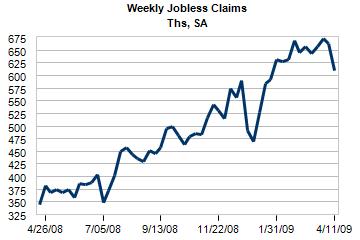 “Recent trends in initial claims have been indicating that the pace of layoffs is at or near peak,” says economy.com, and further noted that “Good Friday fell within the reporting period, which probably had the effect of temporarily lowering claims. With Easter in the following period, this may subsequently impact the coming week as well.” Regardless of the holiday factor, a back to back improvement in jobless claims will be viewed as a positive signal for market participants trading the second derivatives (still heavy job losses, only more slowly).

Economy.com saw a “glimmer of hope for improvement in manufacturing” and look for manufacturing and the overall economy to “bottom in the current quarter with conditions slowly improving as the year goes on as fed dollars begin flowing into state coffers over the next several month. Tax cuts that go into effect April 1 should also spur consumption, helping durables recover.” 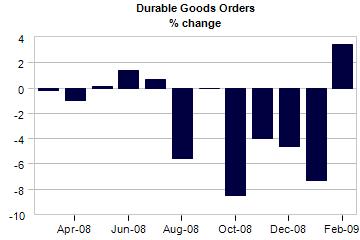 Further support for Friday’s March Durable Goods report will come from the March ISM and March IP reports. The ISM manufacturing report in March shows manufacturing bottomed in December 2008, and have shown 3 consecutive months of “relatively flat” improvement indicating some stabilization in the rate of change in the economic contraction. “The March ISM survey showed some flickers of hope. New and backlogged orders increased over the month, suggesting that manufacturing is carrying some positive momentum into the second quarter. The employment index inched higher, but it does not alter the forecast for a 200,000 decline in manufacturing payrolls in March. Layoffs will begin to moderate in the second quarter as the inventory correction fades. The gradual improvement in the ISM survey is encouraging because it suggests the rate of economic contraction has peaked and a bottom in the economy is beginning to form.”

Adding to the optimism, at economy.com was the April 15 Industrial Production report for March. Yes, like the ISM report, it was still contracting, but there is a hint that the rate of contraction is slowing. Again this is all “second derivative” trading for market participants. Inside the IP report, capacity utilization fell below 70% for the first time since the series began in 1966. While this is not encouraging, economy.com still found “there are increasing signs that carnage in the industrial sector will diminish.” The details are admittedly murky and on shaky ground, economy.com adds, “Because industrial output was not falling as fast in the latter part of the first quarter as it was in prior months, it is on a better trajectory heading into the current quarter.”

Apparently, as I write this report, the 10 and 30 year treasuries have already stumbled badly this morning after reaching their 78% retracements to last weeks highs. Before going to those charts, we have to consider one more data point, namely next Tuesday’s consumer confidence report. As long time readers know, I use the consumer confidence reports as a model for the SP500 not Treasuries. I mention it in this report because we have to recognize that if consumer confidence is not worsening or showing improvement, this will encourage equity participants on the long side this coming Tuesday.

Consumer confidence plunged from 37 in January to 25 in Feb then stabilized in March at 26. Again, it is the stabilization factor we are noting. The employment component not surprisingly was abysmal, and sentiment is going to remain in the gutter for quite some time, but at least the sense of being flushed further down the toilet is diminishing. They are in the crapper and they know it. The “holy shit” feeling is passing and for many a sense of “let’s do something about it now” is seeping in. 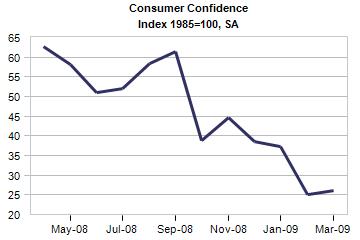 The 10 year chart is ugly as sin today, so is the 30 year, but much less so. In the ten year, we can see the April lows are now in jeopardy. As the week unfolds, we will revisit the daily and weekly chart to ascertain what the downside price objectives for the following week should be. The general outlook is that the treasuries will be hard to buy until after the auctions next week. 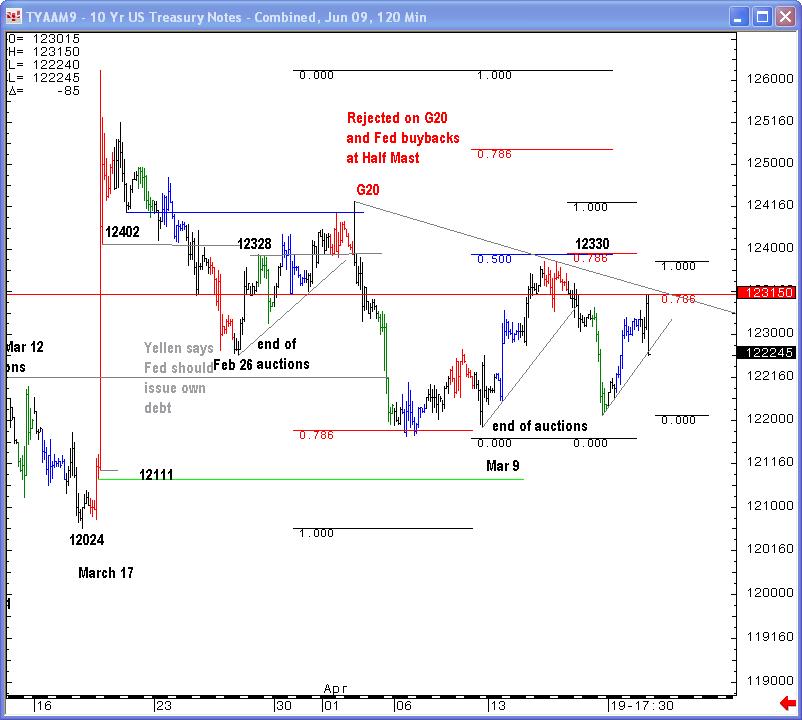 Note today’s high is roughly the March 12 high on the 30 year chart. Watch the rate of change of todays high going into next Wednesdays FOMC meeting. Yes, the March 18 FOMC meeting was bullish the 30 year last month. It will not have the same effect on Wednesday April 29 for several reasons. First, there will be no QE surprises. Second, the market participants will not be leaning heavily on the short side as they were last month. Third, the actual Fed buybacks are being trumped by the treasury supply coming onto the market, hence another reason to wait until the dealers have absorbed all of next weeks supply. 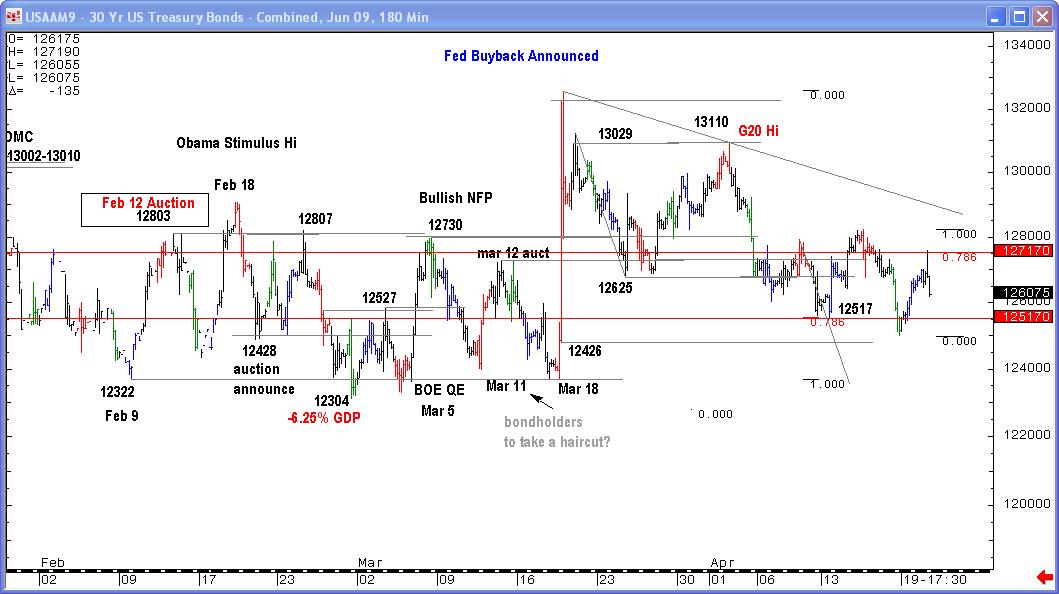