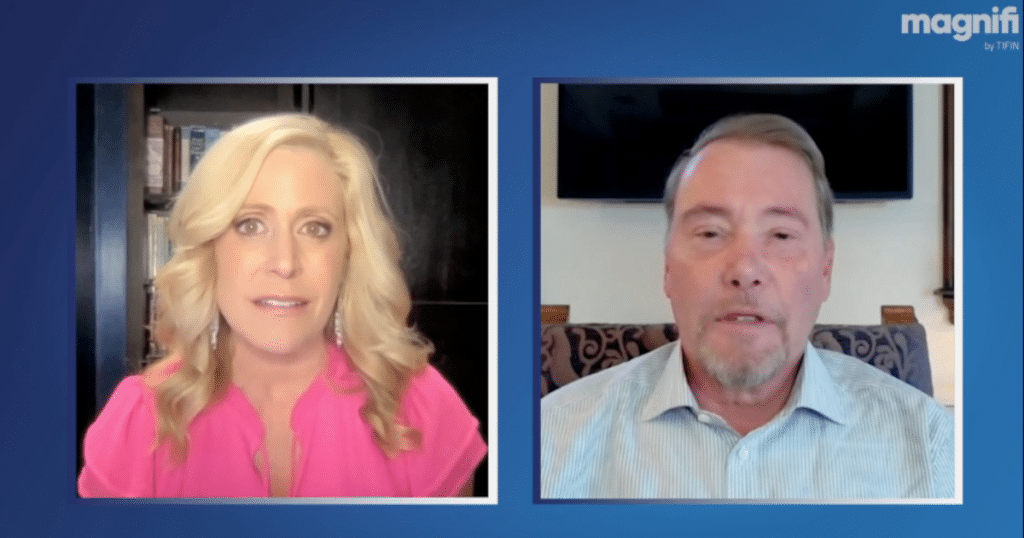 Melissa Francis
Welcome, everyone. Today we're here to talk about Magnifi by TIFIN, a marketplace where you can harness real-time proprietary data to help individual investors and financial advisors find, compare and buy investment products like stocks and ETFs and mutual funds and model portfolios to grow and preserve your wealth.

I'm Melissa Francis. I know a little bit about this subject matter. I am former CNBC, MSNBC, Fox Business and Fox News anchor. And joining us today is investor, legend and founder of DoubleLine Jeffrey Gundlach. Welcome. Thank you so much for joining us. I know on a day when we are watching markets tank, everyone wants to talk to you and get your perspective. I'm lucky enough to have you here and I'm just going to let you go. What's your take on what's happening today?

Jeffrey Gundlach
Well, I think we need to start admitting that we're running into a stagflation situation. The Fed is in a really difficult position because these price spikes are really going to need the Fed to be aggressive if they're serious at all about fighting inflation. And we're starting at such a low rate level relative to an inflation rate that's already seven and a half percent. We have about a 1.7% 10-year treasury. We have Jimmy Carter type of negative interest rates. They're even more negative than Jimmy Carter.
END_OF_DOCUMENT_TOKEN_TO_BE_REPLACED

Today's guest is John Bougearel of Financial Futures Analysis and author of Riding the Storm Out. John is going to give us a detailed look into Treasuries and whats driving them. Enjoy and be sure to let us know what you think.
====================================================================
In spite of this week’s early rally, the problem is that both the 10 and 30 year reached their 78% retracements to last week’s highs. While the strength of this week’s rally has been more impressive than any since the March FOMC meeting, we must bear in mind three things between now and next Wednesday and Thursday. This Thursday, jobless claims contracted sharply last week, and may show further improvement. On Friday, Durable Goods showed improvement in Feb, and if you add the 1, that too could carry over into March. These two reports alone could provide further signs of Bernanke’s “green shoots” and Obama’s “glimmer of hope.” Until I looked ahead at the upcoming economic data, I could not figure out what would pick the stock market back up between now and the Fed release of the banksters stress-tests on Monday May 4. What comes into focus is a nascent improvement in economic data, just as Bernanke is seeing it. END_OF_DOCUMENT_TOKEN_TO_BE_REPLACED

Today's guest blogger is Tony D'Altorio, an analyst for Oxbury Research. Tony's credentials include over 20 years as a stock broker and trading supervisor. Today, Tony tells a tale about the shifting market seas and how we look to captians to guide us through turbulent financial waters.

I am not sure where this old saying originated - “a calm sea does not a skilled sailor make.” This old saying is absolutely relevant in the investment world of today. The average individual investor turns to Wall Street investment “professionals” to guide them through these difficult economic times.

Yet most of these so-called professionals are clueless. Why? Because all they have ever experienced in their careers are bull markets in stocks and bonds – in other words, calm seas. They entered the investment business in the 80s or 90s and have seen only good times with very brief interruptions such as the 1987 swoon.

I still recall as if it were yesterday arguing with my colleagues at Schwab in the late 1990s. I kept saying that tech stocks were in a bubble and that, sooner or later, a bear market would ensue. I was always laughed at and ridiculed for my opinions. “C'mon, you'll never see a bear market again. Bear markets don't happen any more in modern-day America! After all, America is the leader in technology, the greatest military power, etc.”

I understood their perspective – they were 20 or 30 somethings who had joined the firm in the 90s and had only experienced markets which went up. They would advise clients with gems such as to buy and hold S&P 500 index funds for the long haul. I never did give such “sage” advice, which did not sit very well with my bosses. It was one of the main reasons I left the firm – I just could not tell clients in good faith such drivel.

A good example of a well-known clueless investment professional is Bill Miller of Legg Mason, of whom I've written about before. He became a Wall Street “genius” in the 1990s as his fund went up in sync with the tech bubble. His fund has been a disaster in the last few years as he bet heavily on financial stocks.

This past week Mr. Miller stated that the “bottom has been made” in US equities. That statement immediately told me we have further to go on the downside! Mr. Miller also called for - of course - the Federal Reserve to purchase stocks and junk bonds directly. Mr. Miller has that typical Wall Street combination of ignorance and a sense of entitlement.

However, even Mr. Miller's stupidity pales in comparison to the bozos in the Treasury market who are fighting each other in Wall Street's version of Thunderdome to “invest” their clients' money at rates of zero or one or two per cent. These people remind me of children gathered around a warm campfire on a cold evening roasting marshmallows who frighten each other with ghost stories.

Although instead of ghosts, it's deflation. Boo – deflation! “I think I see deflation”! There are panicked screams! “Oooh – I'm so scared”! “ I'd better go out and put every penny I “manage” for other people into T-bills at zero per cent”!

These frightened fools have priced in corporate default rates of 21% (the rate during the Great Depression was 15%) and deflation in the US for the next 5 to 10 years. As I've stated in previous articles, deflation is merely a bond market 'ghost story' meant to frighten people and separate them from their money.

At most, deflation would last in the US for no more than a few months. My view would change only if I saw actual 1930s type of economic statistics such as 25% unemployment or the US nominal GDP dropping by 50%.

Why do I think deflation is not a long-term threat? It's simple economics – a huge debtor nation such as the US cannot sustain deflation. In order to survive, the US needs inflation so that the country can pay back its debt with much “cheaper” dollars.

That process has already begun. Why do you think that the Federal Reserve is expanding our monetary base by more than $11 billion a day since September? And that does not include the latest trillion dollars that is being injected by the Fed into the financial system.

The iceberg that the RMS Treasuries will hit will be inflation. Inflation will result from the massive printing of Monopoly money by the Federal Reserve in order to fund the US Treasury's seemingly insatiable need for tens of trillions of dollars to bail out Wall Street.

A side bar - sadly, America seems to be going down the road to where Wall Street is taken care of, it seems, but nobody else. A half-century ago, President Eisenhower warned Americans about an overly powerful “military-industrial complex”. I wonder what Ike would think about the “financial-political complex” that seems to be running the country now? And running it poorly, I might add!

Massive printing of money has, throughout history, always led to inflation. Despite what Wall Street says, this time will be no different. Always remember that the most dangerous words in the investment world are that “this time it's different”.

The clueless Wall Street sailors have basically turned the US Treasury market into a market with “return-free risk”. Investors should not ignore the flashing warning light – credit default swaps which insure against a default by the US rose to an all-time high this past week.

Much of that money has already been lost. What I fear is that the remaining money will go down with the RMS Treasuries and also disappear forever. It will be a devastating blow to our country to see an entire generation of Americans' hard-earned savings go down the toilet, just to finance the party that Wall Street had.

What can an individual investor do? The best advice I can give is to keep an open mind, look for opportunities, switch off CNBC, and get opinions and advice from sources which are completely independent from Wall Street.

I still have many friends in the investment industry working for brokerage firms, financial planners, and financial advisory firms and the advice they give has changed little. It's still the same drivel they were spewing in the 1990s. They are expecting “calm seas” to return any day now.

I would rate their skills as “sailors” right up there with Bob Denver's famous character – Gilligan. My kingdom for good sailors to help average investors navigate the current treacherous economic seas!

Originally formed as an underground investment club, Oxbury Publishing is an investment think tank second to none. The research team is comprised of a wide variety of investment professionals from equity analysts to futures floor traders all independent thinkers and all capital market veterans.