There are some strategies that do use both types of indicators simultaneously, usually on multiple time frames. That’s beyond the scope of this article, but here are some ideas to help ensure your charts are properly attired for the market you’ve chosen to analyze.

A trending market is one that prices move strongly in one direction, either up or down. The easiest way to visualize this price pattern is by drawing a line that follows the slope of the prices. Another hallmark of a trending market is the steady move to new highs and higher lows. Conversely, in a down trending market prices would be making lower lows and lower highs. 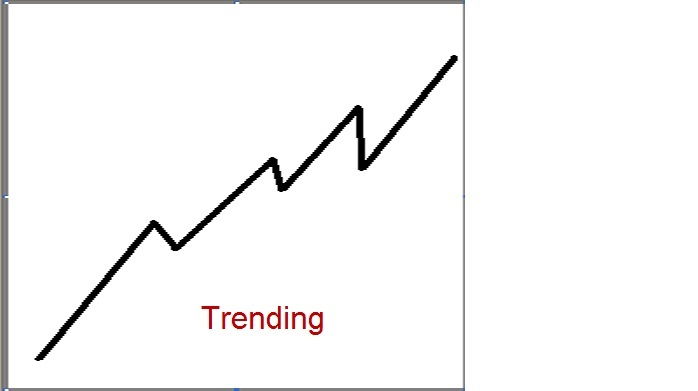 Trading markets don’t make new highs. There is no discernible strong move in either direction. Prices tend to ping back and forth near old highs and then fall to prior lows. Tracing this type of price action would reveal a series of peaks and valleys. 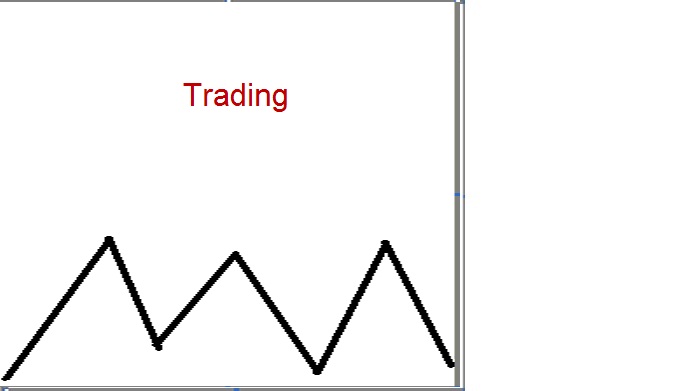 Most conventional thought is that there are two types of indicators – lagging and leading. In my experience, they all tend to lag. That doesn’t mean that they aren’t valuable, but knowing how to use them is key.

Indicators don’t predict – they confirm. Consequently, they should not be used in isolation, but paired with other data to validate the information on the chart. My preference is to first interpret the price pattern and then use an indicator to bolster my analysis.

Trending markets require lagging indicators. Moving averages (simple, weighted, exponential) are in this category as is the MACD (that also has a leading component, too). These indicators will keep you in a trend as long as the trend remains intact. Lagging indicators are useless in a trading market -- moving averages tend to flatten in a sideways market and offer no useful information.

Here’s an idea for finding trading entries in a trending market using moving averages. Scroll back in time on your charts and plot any average. Notice how price reacts as it approaches the MA. It’s possible to build very robust trading system from this information.

Here’s an example of price crossing a 20 period moving average. I’ve asked the software to show me closes above and closes below – those are my buy and sell signals. This is a chart of the SPY with the green arrows corresponding to buys and the red arrows as sell signals. 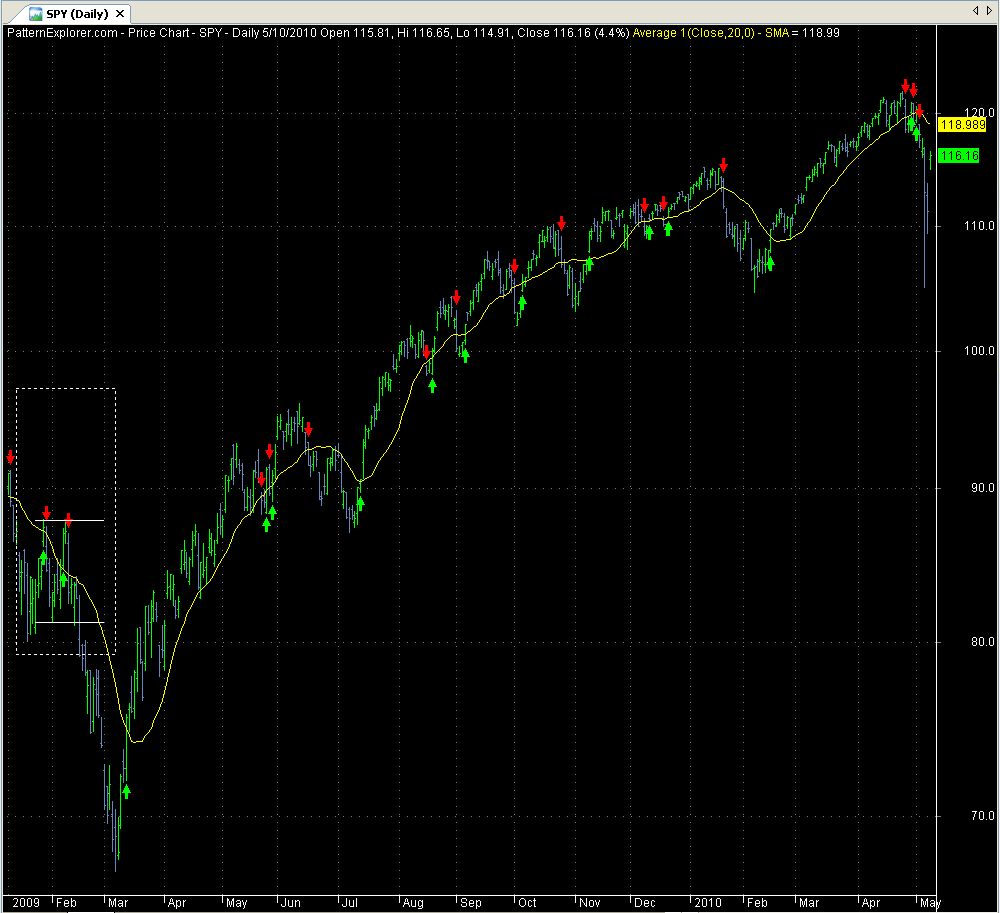 At the far left is a dotted box containing two parallel lines. The market was trading, or going sideways within that period and the severe down slope of the MA created a couple of bad signals. When a MA is so severely sloped don’t try and trade against it by going long (or short, as may be the case).

Most of the buy and sell signals from March 2009 to the present look pretty good. One way to improve this method would be drawing a trend line. That would offer additional support to a sell or buy signal.

The way I’ve drawn trend lines is a little different than others and I fail to remember where I learned this method. To draw an up trend line find the lowest low and draw the trend line up touching the last low before the last high. Here’s a close-up of the swing from March ’09 to mid June with a trend line. 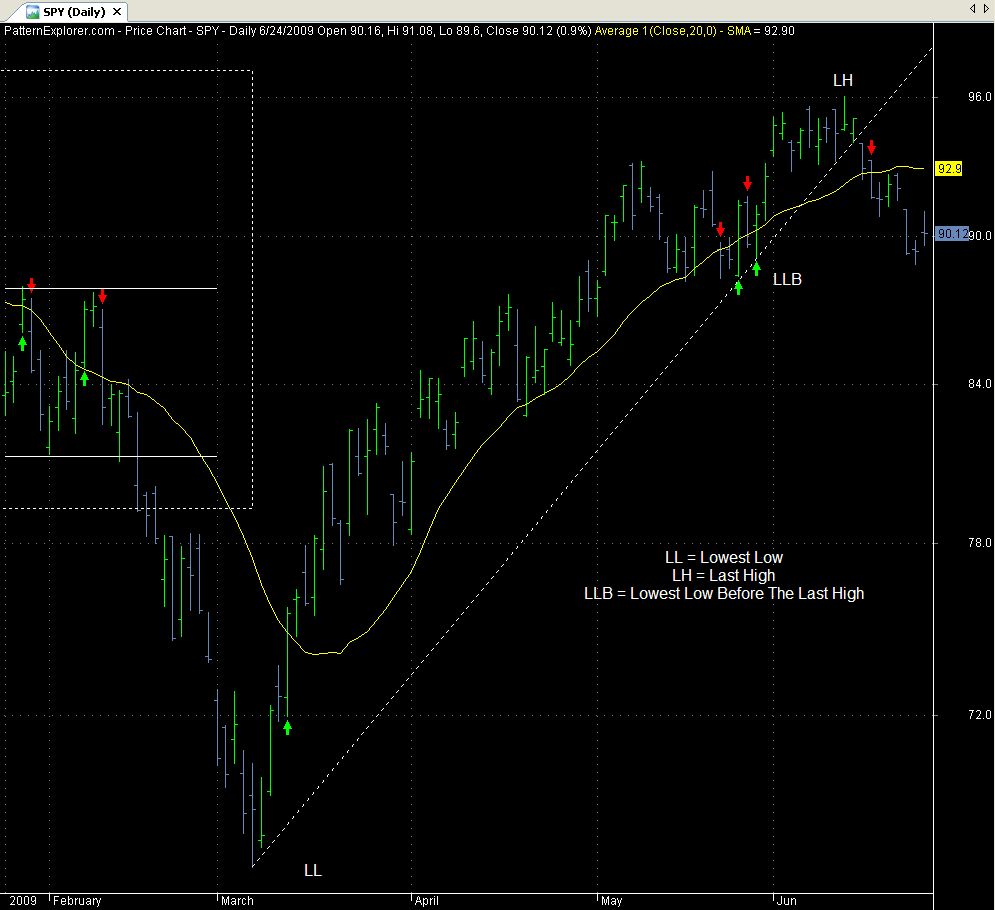 Once of the most profitable strategies is getting back on a trend when it resumes its former direction. One way to accomplish this is to watch price and the trend line.

Once a strong trend changes direction, plot a trend line. Strong trends usually resume their former direction and it’s important to know when to take another position.

The next chart shows that a close above the 20 MA occurred in early July as marked by the green buy arrow. The price action at the trend line suggests that the former up trend has resumed and it’s time to buy a new position. 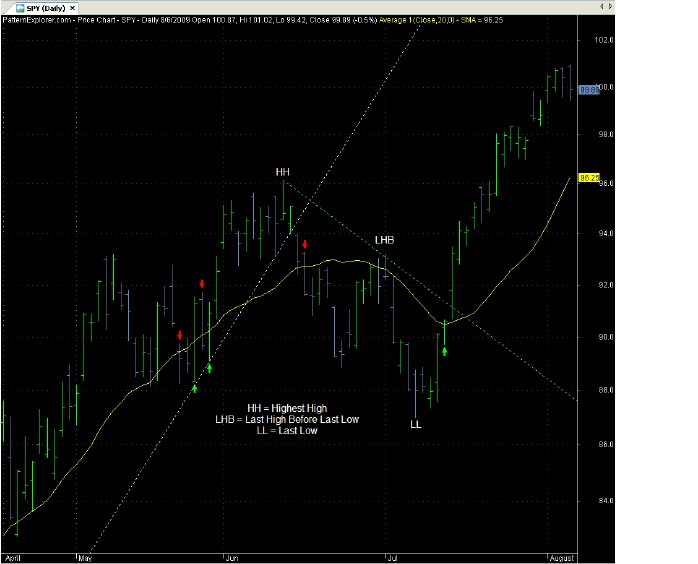 There will always be periods of consolidation in the markets to frustrate traders. The Relative Strength Index (RSI), Stochastics Oscillator, and Williams %R are some of the common indicators in most charting software. These tools swing between oversold and overbought and are usually bounded by an upper and lower range.

Trading markets are tricky to trade. Despite the use of oscillators there will be an increased frequency of signals, both buys and sells. Many of the signals will be false and whipsaws are very possible.

One of the best ways to tame a trading market is to find the support and resistance areas on the chart. The odds of success can also be increased by taking only the most overbought and oversold signals.

Take a look at the SPY between mid November 2001 and early January 2002 – for two months the SPY had a 6 point range swinging between 112 and 118. Notice the flatness of the MA – it provides no helpful information. 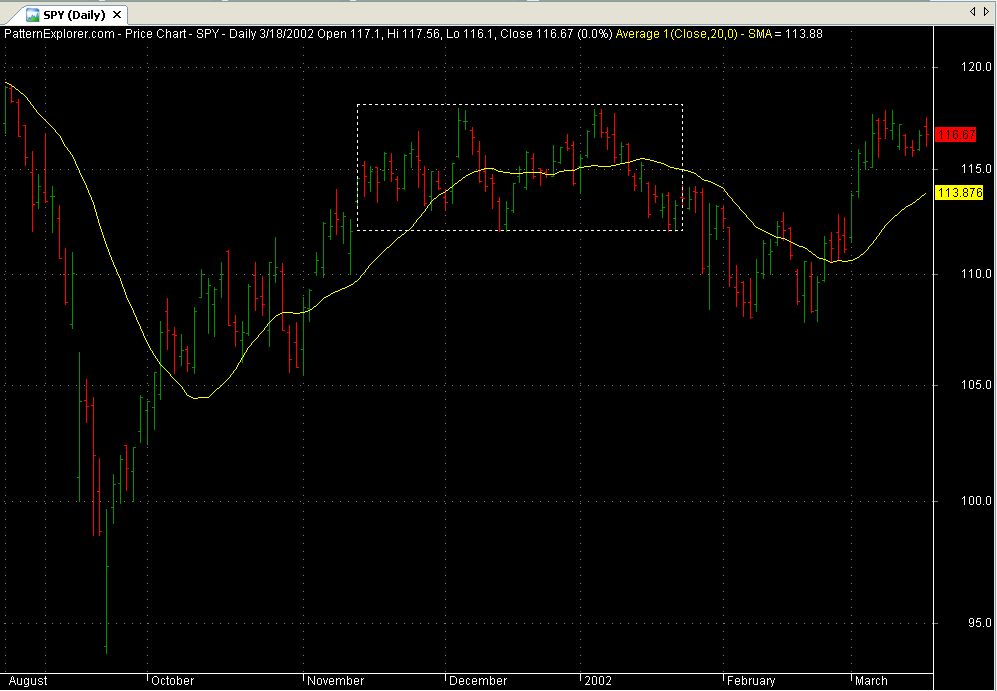 The following charts are comparisons of the following indicators during a trading market: RSI, Williams %R, and the Stochastics. First, the RSI – 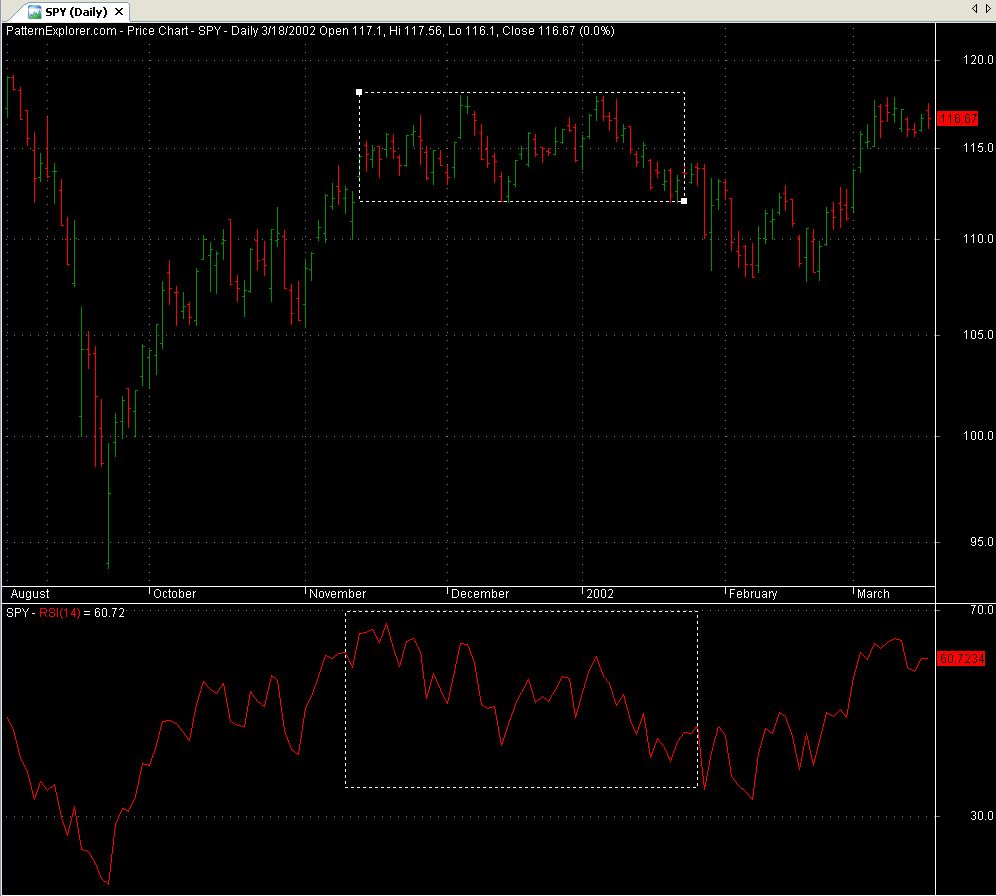 Consider the box containing price as the upper and lower limits or as areas of support and resistance. The RSI is set to the default of 14 periods and it offers little valuable information as to where to place a buy or sell. This is the same chart with the Williams %R – not much better. 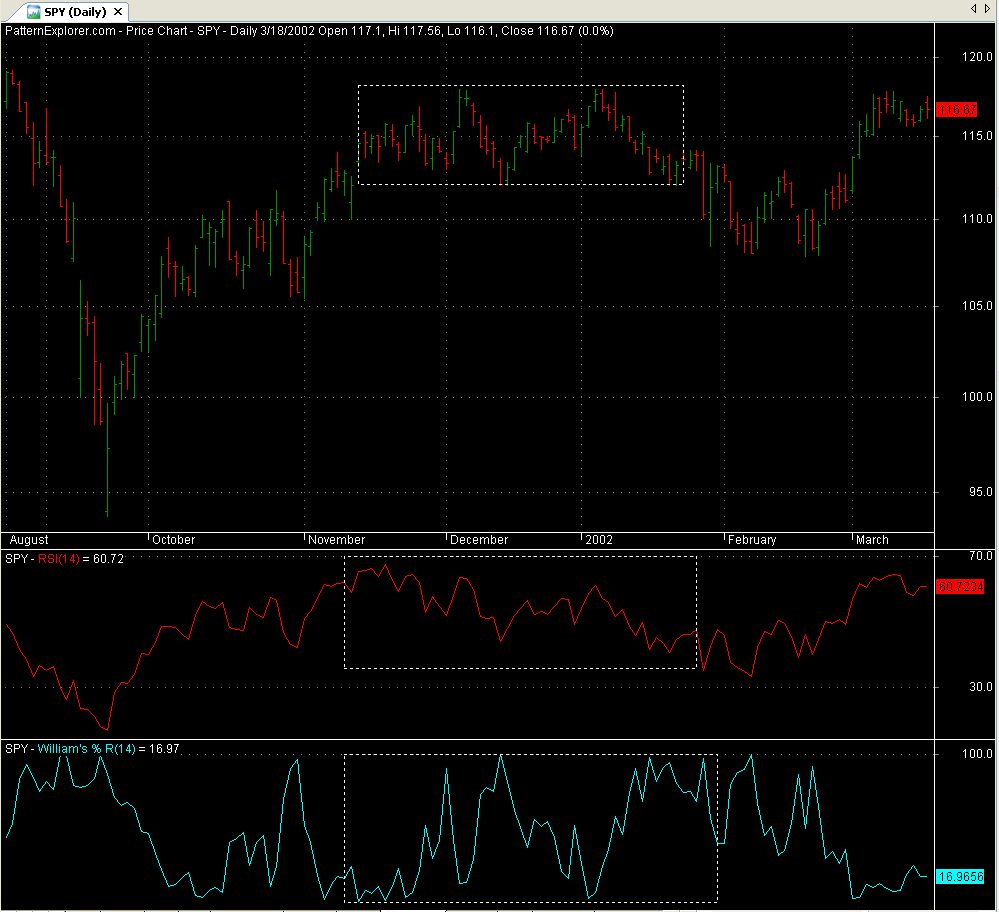 The yellow line in the bottom pane is the Stochastics. Of all three it has the smoothest movement. The horizontal white lines correspond to the highs and lows or price – the Stochastics shows the best correlation to the price highs and price lows. 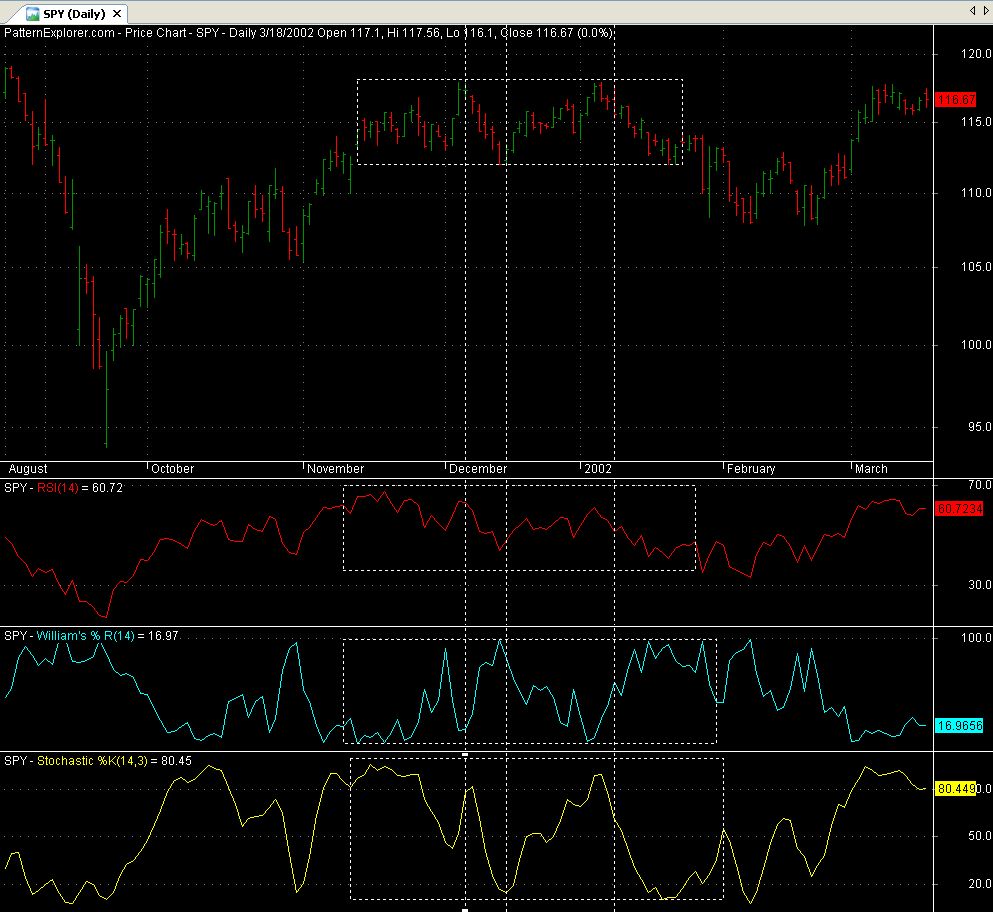 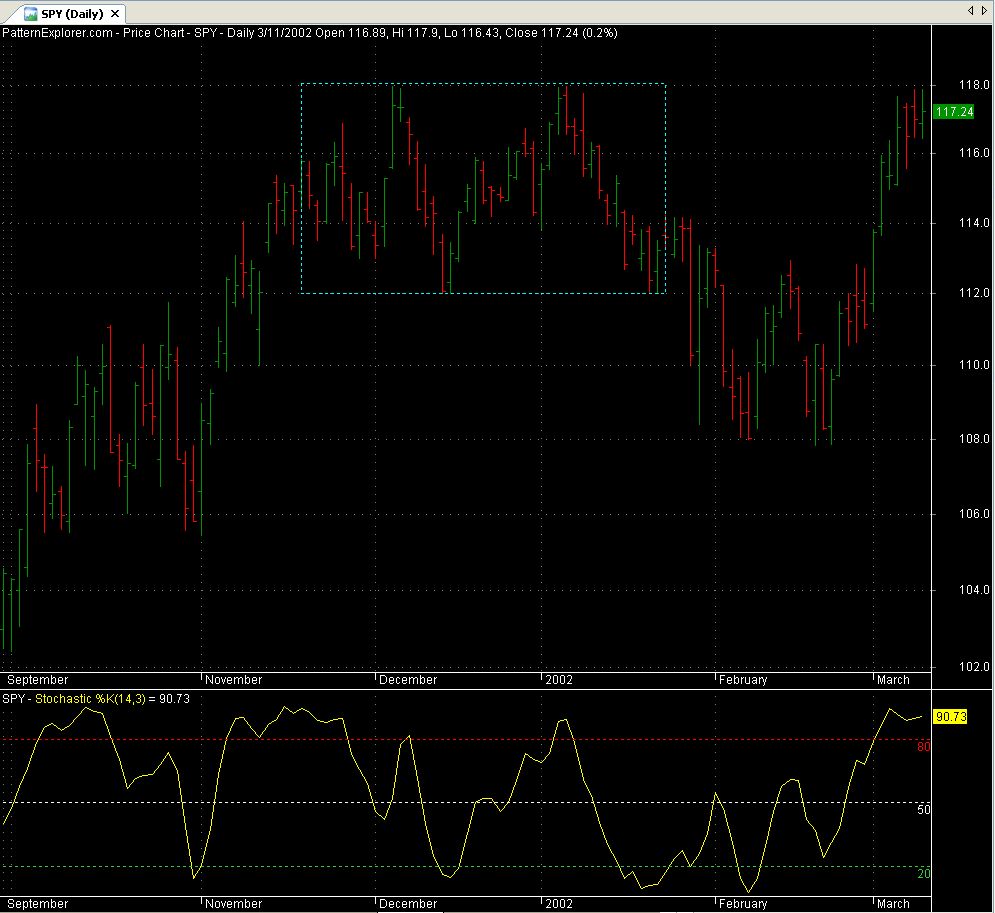 The Stochastics settings are the default settings (14, 3) and we’ll use the conventional oversold/overbought parameters of 20/80.

The first signal is an oversold signal – take a long position. The long position is sold at the overbought 80 level. Take a short position when the Stochastics curls down below the 80. That short would have been covered when it became oversold below the green 20 line.

Trailing stops is always a good idea in any market condition. Each of us has to consider the drawdown we’re willing to accept – that will help define where stops are set. For example, a two bar low might make a good trailing stop for a long. Conversely, trail a two bar high for a short position. 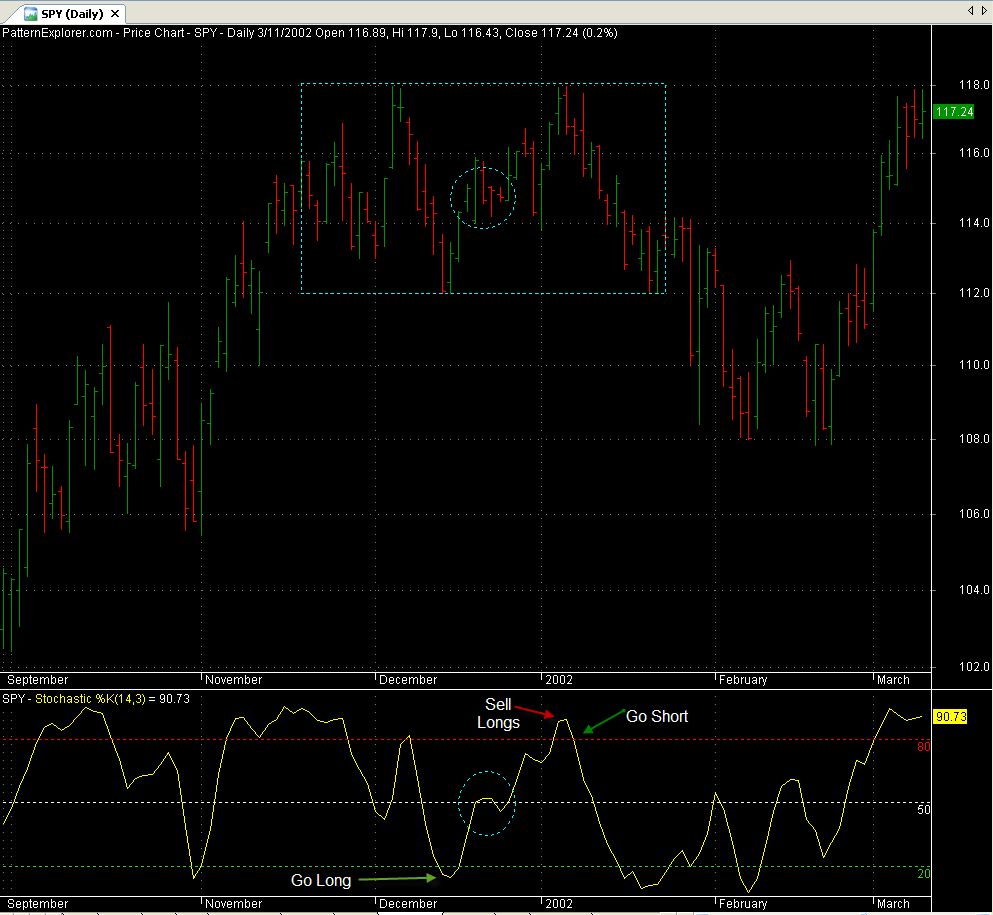 Watch the 50 line if you use this trading system. The 50 line seems to be a resistance line for the Stochastics. Oftentimes the indicator reacts at that level in a couple of ways. If Stochastics rises from oversold and can’t exceed the 50 line it is likely to fall back to the oversold level.

When falling from overbought levels the Stochastics will sometimes stop at the 50 line and go back up returning to the 80 level or beyond. Let price help give you some clues to what may happen when Stochastics reacts at the 50 level.

On the previous chart notice the blue circles on price and on the Stochastics. The Stochastics is indecisive about the direction it wants to take when it encounters the 50 level. Prices have formed a little consolidation within the larger blue box of consolidation. The way to trade this is watch price – if it breaks below the lowest low of this mini consolidation sell the position. Stick with the trade as long as price is above the lowest low.

The following chart is another period of consolidation in 2003. The Stochastics indicator wasn’t very accurate. The parameters were shortened to a 10 period Stochastics in the bottom pane, but the results weren’t much better. 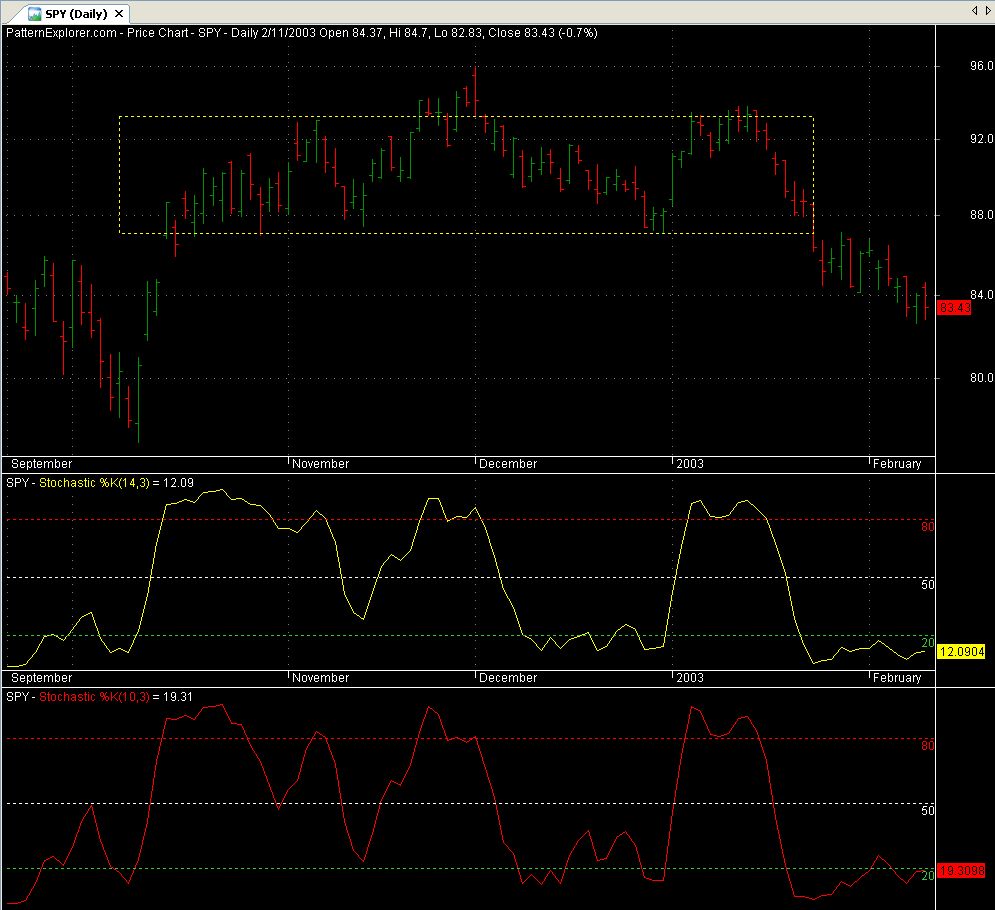 It would have been more profitable to find the support and resistance areas and trade from the price action instead of relying on the indicator.

Trying to participate in a trading market can be very frustrating. The more trading one does the more we find our comfort levels. There is nothing wrong with taking a little trading vacation and waiting for market conditions that suit your style.

I hope you’ve found a few ideas that will work for you. Good luck with your trading!

As a kid instead of reading the comics from the newspaper I learned how to read the bid and ask columns from the stock page.  My first trade was as a teenager and I got hooked on the idea of money making money.  My career spans more than 20 years.  After graduate school I did a short stint as a stockbroker and then ventured out and founded my own company.  Today I trade only my account and offer advice to a few close friends.