Why I Favor the Stock Market

Alright, I admit it … I’m a stock market fan! Not Forex, not commodities … the stock market is where it’s at.

Make no mistake about it, more personal fortunes have been made in stocks than any other investment vehicle out there. That is a fact. Forex and commodities are highly specialized and the failure rate for amateur traders is higher in those markets than with stocks. As you would expect, the success rate with stocks is far higher than with Forex or commodities trading.

So with that in mind, let me explain why … END_OF_DOCUMENT_TOKEN_TO_BE_REPLACED 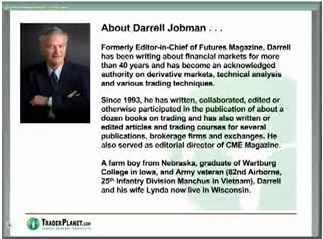 After Adam revisited the rules of the "52-week new highs on Friday rule," we convinced Darrell Jobman to share one of his related webinars as a special treat to out Trader's Blog viewers. In this webinar, he shares specific examples on how to use indicators to trade your favorite global markets. Darrell has been writing about financial markets for more than 35 years and has become an acknowledged authority on derivative markets, technical analysis and various trading techniques.

The length of time used for the prior period is a matter of personal preference and time horizon of the trader. A narrow window of less than five periods back would be short-term in nature while six to nine periods would be considered intermediate; 10 or more would be a longer time perspective. END_OF_DOCUMENT_TOKEN_TO_BE_REPLACED

Guy Cohen is the creator of The Private Traders Club, Flag-Trader, The OVI Index and OptionEasy.  He is also the author of the best selling trading books "Options Made Easy", "The Bible of Options Strategies" and "Volatile Markets Made Easy" (FT Prentice Hall).

Guy specializes in stock market trading and he has created numerous online applications for stocks and options traders, with his hallmark being his user-friendly approach and liberal use of illustrations.  His clients include NYSE Euronext, The International Stock Exchange (ISE) and FT Prentice Hall.
----
What’s the Best Way of Making Money in the Stock Market?

Well that’s a pretty open ended question.  First, it’s always best to specialize.  As with any skill in life, you cannot be a jack of all trades in trading.   END_OF_DOCUMENT_TOKEN_TO_BE_REPLACED

Yesterday you freshened up with the Williams %R oscillator. Today we have an indicator that you may or may not be familiar with as well.Like we have said before, if you have used other technical analysis indicators previously, you can use a combination of the studies and other techniques in conjunction with the "Trade Triangles" to further confirm trends.

The stochastics indicator created by George Lane measures the relative position of the closing price within a given time interval. This indicator is based upon the premise that prices tend to close near the upper portion of a trading range during uptrends and near the lower portion of a trading range during downtrends. When prices close in the middle of a range, this suggests a sideways market. There are two components to this calculation, the %K value and the %D value. The %K is calculated as follows: %K= (C-Ln / Hn – Ln) x 100 where C = closing price of current period, Ln = lowest low during n time periods. Hn = highest high during n time periods and n = number of periods.

These formulas produce two lines that oscillate between a scale of 0 and 100. As with the other oscillators, a stochastic value below 30% suggest an oversold condition, while a value greater than 70% suggests an overbought condition.

Some simple trading rules apply in the use of the stochastics indicator. A sell rule would be to sell when the fast (%K) crosses over the slow (%D) and both are pointing down, but are still above the 70% level. A buy signal would be triggered when the fast crosses the slow, and both point up, but are below the 30% level.

Another type of signal occurs when the stochastics indicator diverges from a price move similar to momentum and RSI.

You can learn more about the Stochastics and George Lane by visiting INO TV.