Weekly Gold Report (May 20th through May 24th)

After wrapping up a week full of economic data in the United States, we now look forward to a fairly light schedule. At this point, most traders realize how insignificant the results of these reports are and they will likely continue to follow the stock indexes with a “buy the dip and enjoy the trip” mentality. Why wouldn’t they? Indexes like the S&P 500 have only spent about a week below the support trendline since the move began in November of 2012. Even after a string of misses in the middle of last week, the S&P Futures only pulled back a fraction of the prior day’s move up. And that was only long enough for the buying to resume and a new high was put in shortly thereafter.

I think this move higher in the stock market is great for those who are courageous enough to have held long positions over the last several months, but I also think that the attention on this move up has damaged other opportunities. It is fairly obvious that the funds supporting this move up are tied to Central Bank injections of liquidity. I believe the standouts are in this order: the BOJ, the ECB and the US FED.

Take note of the daily charts of the Japanese Yen and the S&P 500. The inverse relationship of their direction is undeniable. And while it may not be a perfect day-to-day match, it is clear that when the campaign to crush the Yen was made known in Japan, the buy switch turned on in the US Stocks. We should also note that the ECB cut rates at their last meeting, which likely set off further interest in the move up in the US stock indexes. It really is the only game in town for buyers.

From a big picture perspective, I think it all makes perfect sense. Following the crash a few years ago, the FED was carrying the experimental torch that is Quantitative Easing. The premise of this experiment is to print fresh money (US Dollars) and purchase assets like Treasuries to keep interest rates low. Over the past several years, the FED has rolled in and out of programs that purchase and sell long and short dated Treasuries, and have surely been involved in other markets as well. But the basis for this experiment was to keep rates low and control money flow until the United States showed sustainable growth.

As soon as there were signs of a rebound in sectors like real estate, construction, consumer confidence etc, other Central Banks around the world began to take note. I believe that as soon as this experiment of the control of money flow began to show some positive signs, the FED had to invite others to participate, especially since all major Central Banks have been borrowing from one another like mad over the last few years. This would be the only way to have the Dollar begin to recover versus other global Currencies. This is hugely important for a global balance in Currencies that needed a break from the Dollar getting slaughtered while other major Currencies outside the Dollar were trading too high.

And this is not something that only began recently. The ECB and the BOJ (and others) have been actively driving their respective Currencies lower through programs like QE for a long time. It had to happen in order to keep a balance in Currencies (affecting exchange rates and global trade), and also to keep all markets from going haywire as the FED unwinds their programs and positions that were taken on during QE1 and QE2. In effect, this has been a perfect way to keep global markets balanced and free from the major swings that we saw in years past. It was however only recently that the lions share of the focus and buying went into the US Stock Indexes versus other vehicles, and out of markets like Gold and Silver that once were the darlings of QE programs. Support targets for Gold may be a bit lower than last night’s low. I have my sights on the $20 range between $1300 and $1280.

I will be on the lookout this week for a few reports that may be impactful. The FED Minutes and the BOJ Interest Rate Decision are released on Wednesday. These two reports should give us all the information necessary to see if the rally continues in stocks, and the drubbing continues in the Yen. If these two markets reverse, I will be on the lookout for any markets that seem to be benefitting the most from the reversal. It sure seems to me that the Precious Metals like Gold and Silver would be a bargain if this move happens. It would also be a perfect way to keep most traders guessing on the low tick after a token Sunday night drop to start the week! But I do not plan to do suggest anything until the stocks correct a bit more than a fraction. Support targets for Gold may be a bit lower than last night’s low. I have my sights on the $20 range between $1300 and $1280. 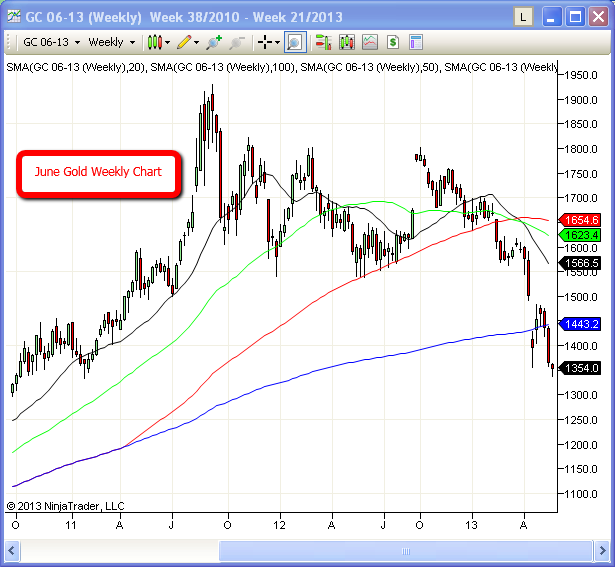 6 thoughts on “Gold Chart of The Week”