While the week ahead is light on economic data in the United States, the most important news that will affect global markets will still come out of the United States. Traders around the globe will look to trade any news from the White House on whether or not the US will go through with a strike on Syria.

After watching President Obama stumble through the G20 Summit last week, it will be interesting to see if the staff that writes the Presidents speeches can be convincing enough this week as Obama will look for support in the US. So far it appears that his only true International support is out of France where Socialist, Hollande stands firmly behind anything Obama says. Within the US borders, it also seems the Presidents support is drying up day after day.

The standout report from last week was on Friday when the Non-Farm Payrolls provided bleak numbers. While the expectations were to see 180K jobs added, the number came in at 169K. After a slight drop in the equity indexes, the market recovered as traders began to price in the possibility that the FED may not taper their Bond Purchase Program (QE) next week while labor numbers are this bad. There is also one other theory that may have supported the bounce. That is that investors bought stocks after seeing the actual Unemployment Rate dropped since the prior month to 7.3%. I would like to believe that the recovery in stocks was due to the former and not the latter, because it seems silly to believe the rate fell for any other reason than a staggering 500,000 Americans stopped looking for work in one month!

This week will likely be the last week where day-trading markets will be a traders best bet. I believe we will experience continued news-driven volatility as Obama tries to gain any support he can through his speeches. Even if a final decision is made on whether or not the US moves forward on Syria, next week’s FOMC announcement is equally as important. With that in mind, I believe investors will hold off on any major commitments to the markets until after Ben Bernanke and Co. decide whether or not to taper Bond Purchases in Septembers meeting. 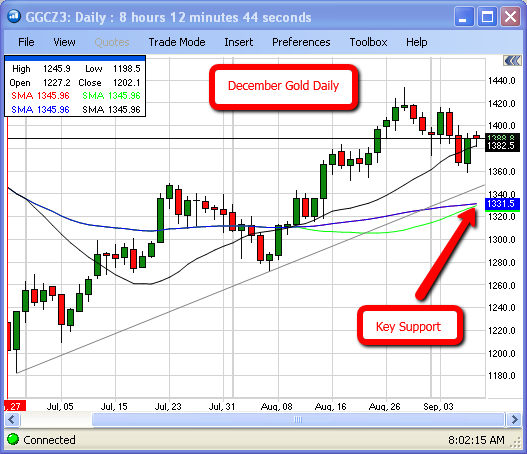 Gold Futures had a volatile week last week in response to the key macro events that drove outside markets as well. After a drop of over $50 in the December Futures in the middle of the week, Gold managed to finish on a positive note on Friday. We begin the week consolidating near the 20day SMA and near the halfway point between the August high and Fridays low print. At this point, it is difficult to say whether we will retest either the high or the low over the next five days. The reason being we are still unsure whether or not the US will take action in Syria. But make no mistake, the final decision will have an effect on Gold prices. My plan in the short term is to look for intraday trades in Gold Futures, unless the prices drop to key support around $1330, as seen on the chart. If Gold drops to that price and holds support, I would be interested in entering the trade on the long side with a bit more confidence than the price we start this week at.

If you would like to discuss trading in the Futures and Futures Options markets with me, please feel free to call or email me directly. You can reach me directly at (888) 272-6926 or by email at [email protected].