Hello traders everywhere! Adam Hewison here, President of INO.com and co-creator of MarketClub, with your video update for Thursday, the 20th of March.

If you have read my posts for any length of time, you will see that I frequently refer to the saying, "the trend is your friend." However in this case, there appear to be two developing trends that will offer some amazing opportunities, but at the same time create some very dangerous times for the planet. 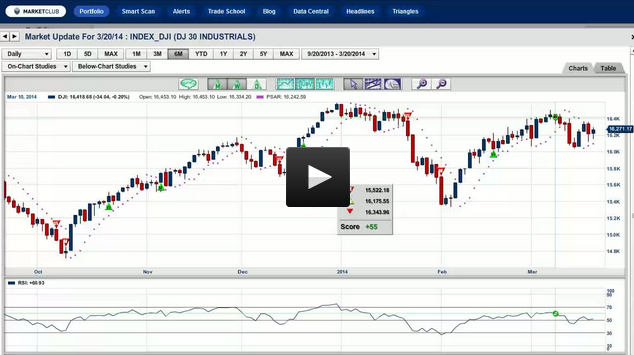 I'm sure like many investors, you are tracking what is going on in the Ukraine and Crimea. I do not view this as a positive, in fact, I think this is a once-in-every-two-generations kind of event and a very negative trend not just for the US and Europe, but for the global community in general.

The other trend that I see is right in front of our eyes every time we go to buy food at the supermarket. Yes, food costs are rising. This is seldom reported by the national media, but it effects every family here in America and creates the foundation for inflation. This leads me to Janet Yellen's remarks yesterday when she stated that interest rates could be rising as early as the next six months. I have said this before, the only way the Fed is going to be able to dig itself out of the hole it has put itself in, is to inflate the economy. I am not sure that is going to work this time, as the national debt is $18 trillion dollars and even the smallest move in interest rates will cost the US billions in extra interest payments. All in all, not exactly a rosy picture, more like being stuck between a rock and a hard place.

In separate news, Bloomberg reported that Hong Kong stocks officially entered into a bear market today, meaning they are down over 20% from their highs. It would appear that many of the markets are literally hanging on by their fingernails to the gains made in 2013. Make no mistake about it, the markets are nervous and this could easily lead to a rush for the exit doors.

This is the one index I would watch closely today and tomorrow. Should the DOW (INDEX:DJI) move below the 16,046 level, it will reverse the weekly Trade Triangle to red, indicating that you should be short this index or on the sidelines. The other two indices, the S&P 500 and the NASDAQ are stronger, but they will not be immune to downside pressure if the events in Europe spiral out of control.

After reaching a high around $1,392, Gold (FOREX:XAUUSDO) prices fell sharply from the $1,400 resistance level that I have outlined in previous reports. The $70 drop was fast and furious and I would now expect it is going to take some time for this market to regroup and repair itself before resuming its upward trend. At this point in time, I would not be in a rush to buy gold, even though the longer term trend remains positive for this market. There is a long-term support line that comes in around $1,300 on the spot gold chart and I expect that area to provide sufficient support to arrest the current decline.

The very hint of higher interest rates from Miss Yellen was enough to reverse the Dollar (NYBOT:DX) from its recent 28-month low against the Euro. I still consider the trend in the Euro to be positive against the US Dollar and I expect this cross to find support around the 1.3750 level. I want to wait until all the dust is cleared before reentering this market.

There is somewhat of a mixed picture in the Crude Oil (NYMEX:CL.K14.E) market, with the Trade Triangles indicating a neutral reading of +55, which means a trading range is in place. It would appear as though the market has found support around the $98 level. I would like to see more backing and filling before the longer term bull trend regroups and begins to move once again to the upside.

3 thoughts on “2 Troubling Trends For Investors”