Here we are at the first trading day of 2015. You may remember one of my posts in December indicating that the markets can be quite dangerous over the holiday time period. Well, that same danger carries over in to the first week of January when many traders are just getting back from vacations and preparing to setup their trading desks for the New Year. Typically, I like to get serious about the market after the first full trading week of January is over and volume once again returns to the market.

At the moment, we're still in a very low volume period indicating that the markets can be extremely volatile on a moment's notice. You only have to look at gold in the last several days to see the extreme swings up and down that market is going through, which proves my point. This extreme kind of market action can happen in any market with little or no notice - so the word for today and next week is caution, caution, caution.

On A Personal Note

I hope everyone had a wonderful time with family and loved ones over the Christmas holidays.

I am very fortunate, thought some would say unfortunate, that right after Christmas I have a birthday. The 26th of December is my birthday, for those of you living in England and Australia, that's Boxing Day. I've gotten to the age when birthday presents really aren't my thing anymore as I pretty much have all the underwear and socks I will ever need. However, this year was different, as I did want something, something very special and close to my heart.

I wanted to go up to New York city and see the Broadway show, "The Last Ship," starring Sting, the singer and song writer. The show is about ship building, and in particular, building the last ship on the River Tyne in England. The reason why this was so important to me is because I grew up in Newcastle upon Tyne and my grandfather built ships there and was a foreman in a shipyard. For me the show "The Last Ship" was very significant, as I felt I would be honoring my grandfather's memory by seeing the show.

The show was much more than I expected and the music by Sting was outstanding. I highly recommend that if you are in the mood to see a show you get seats for "The Last Ship." You will not be disappointed. Sting has spent the last 5 years of his life giving birth to this project and it clearly shows in the music and the words to his songs. 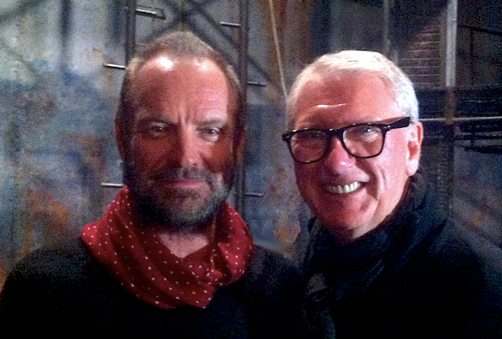 I had the good fortune to meet with Sting after the performance and to personally thank him for what he has done in honoring the thousands of Newcastle upon Tyne and Wallsend shipbuilders. My common Geordie bond with Sting is that he was born in Wallsend just 5 miles from where I grew up in Newcastle and he and I are about five years apart in age. We had a great chat after the show and that common Geordie bond was as strong as ever, that’s what made honoring my grandfather very special to me and a birthday I will long remember.

Now go get your tickets for The Last Ship:-)