Monday, August 24th will long be remembered by investors as the day the world turned red. Every exchange in the world is showing big losses. It all started in China when the Shanghai index closed down 8% for the day, its biggest daily loss since 2007. The drop in China quickly moved over to Europe where the FTSE 100 and other major indices all lost upwards of 4%. 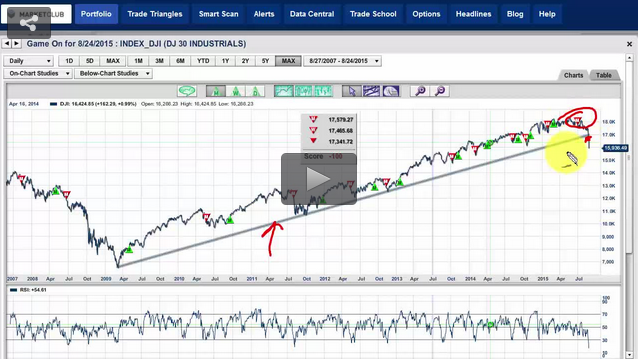 The experts and pundits will all point to different reasons why this happened, but the reality is, the market has been having problems for some time and those problems have manifested themselves in the minds of investors who suddenly perceive things as being not so rosy.

One of the strongest market movers for any market is perception. Perception suddenly took a very negative turn this past week for most of the major indices. We have a lot to be thankful for as the Trade Triangle technology warned us on 6/30/15 that the markets were beginning to change direction. I pointed this out on Friday in my video and showed the long-term trend line that goes all the way back to 2009 when the lows were seen in the market. At the time of my video, the Dow was down around 160 points and was very close to breaking the below this long-term trend line. As the day progressed, that support line was clearly broken with the Dow closing down over 500 points for the day. The breaking of this long-term trend line is a big deal, in my opinion, and it represents more than just a correction in a bull market.

Here's what I see as the major problem, the U.S. along with many other countries have been dependent on low interest rates to stimulate growth. Our own Federal Reserve system has been printing money like it's been going out of style and in doing so has created a tangled mess of loose ends. When the market was going higher everybody was happy and not questioning the soundness of the Fed's policy. Former Fed chairman, Ben Bernanke, is in my opinion, the root cause of the problems we are seeing now. Rather than take a hit in 2009, then chairman decided to start printing money like it was going out of style. You see, Mr. Bernanke studied the Great Depression of the 30s and concluded that money was tight back then and caused the Great Depression to go on longer than necessary. His theory was if you print more money and make it available, then the economy will pick itself up by itself and speed itself out of recession. I think this is flawed thinking as you cannot continue to print more money to get yourself out of debt. That may have worked before, but not now in the global economy. In other words, we just dug a deeper hole for ourselves and our children.

When China devalued the yuan two weeks ago, it was a move to stimulate exports-did it work? Not even close as it appeared to every Asian exporting country that it would be a race to the bottom and that's exactly what is happening now. Look at Prime Minister Abe of Japan who did a similar thing in terms of lowering the value of the yen. It's all meant to get exports flowing to sell to somebody else. Like I said, it's a race to the bottom.

The Trade Triangles, if you're following them and the model portfolios in MarketClub you are reading this right now with a big smile on your face and with some big gains in your pocket.

I've said this before and I'll keep repeating it to all who will listen, discipline is the key to being successful, not hope, not wishful thinking, but discipline. That's the only way you're going to be super successful in the markets. I can share the Trade Triangle signals that will be successful for you, but it really is up to you to pull the trigger and be disciplined.

In today's video, I'll recap all the major markets and once again go over some downside targets similar to what I shared with you last Friday, but with a new twist.

It's going to be an interesting week, one with lots of opportunities and lots of pitfalls.