The holidays are right around the corner, and that means retailers are gearing up for their biggest sales and marketing campaigns of the year. While the broader averages haven't given investors much to cheer about this year, one stock could still deliver gains and brighten up any portfolio.

Unemployment is down to just 5.1% with a healthy job market, and consumer spending is up over 3% and could be headed higher for the fourth quarter. Inflation, which began this year as a negative figure, has finally begun to pick up a little in the past few months as well and currently stands at 0.2%. Retail sales this year have been choppy with growth of 0.6% in July but only 0.2% and 0.1% in August and September. However, retail sales are still up 2.4% year-on-year.

A strong US dollar has been hurting stocks, but could be a positive factor for retailers going into the holiday season. A high dollar relative to other currencies make imported goods cheaper and could help out consumers.

But the real reason that this stock could shine has more to do with its amazing turnaround story. After years of sub-par performance, it finally underwent a massive reorganization in 2012 with new management, store closures, and a new direction. Now, it's in a position to dominate its niche in the retail space.

A Turnaround Story With The Best Chapters Still Ahead

Best Buy Co. Inc. (NYSE:BBY) is a $12 billion specialty electronics retailer that was once of the most well-recognized retailers on Wall Street for its innovation and high growth rate. However, the company began to suffer and by 2011 after terrible earnings looked like a company that's best days were behind it. But in 2012, Best Buy replaced management, closed stores, sold off segments of its business like Carphone Warehouse, and instituted a brand new marketing strategy.

Best Buy now operates primarily in the US with store locations in Canada and Mexico as well. The company is known not only for its Best Buy retail outlets but also Geek Squad – a computer repair and service company that now associates directly with Best Buy stores to provide customers with support in-store or online 24-7.

89% of Best Buy's profits now stem from the US – a fact that could work out well for them this holiday season considering the strength of the US dollar. Foreign currency issues that have been plaguing larger US firms won't impact Best Buy by a large degree.

Since the revamp, Best Buy's stock has shot up over 200% since 2013 and looks like it could head higher. 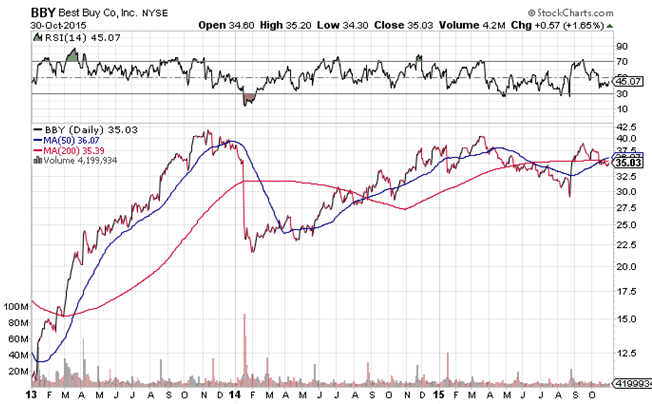 The company has beaten earnings estimates for the last 11 straight quarters and investors have no reason to think that it will miss its next quarterly report that comes out November 19th. The stock looks cheap right now as well trading at just 13 times earnings against the industry average of 23.

In August, the stock was upgraded by Raymond James from “market perform” to “strong buy” with a price target of $40. That's a discount if around 14% from its current price, and if Best Buy beats earnings again, the stock could be set to move even higher.

One thought on “Bet On This Retailer For The Holidays”