McKesson Corporation (MCK) reported quarterly results last week and beat on both the top and bottom line while raising guidance and announcing a massive $2 billion share buyback program. The stock responded with a yawn and now sets around $180 per share. MCK presents a compelling investment opportunity in the healthcare space, particularly after the recent sell-off from $243 to $180 per share. This downward movement was flanked by great earnings reports, increased dividend and additional share buybacks. MCK continues to become cheaper and cheaper as each earnings report is announced and the company continues to purchase additional shares. McKesson looks to be undervalued given its growth rate, acquisitive mindset, attractive P/E, dividend and share buyback program. I previously wrote an article outlining my bull case for McKesson and since then the stock has only become cheaper. I feel McKesson is a buy below $200 per share.

McKesson reported revenue of $58.8 billion which translates into a 10% increase from the prior fiscal year quarter. On top of this revenue growth, earnings per share increased 19%, cash, and cash equivalents reached $5.2 billion, the company initiated a $2 billion share buyback program and raised guidance from $12.36-$12.86 to $12.50-$13.00 per share. All of these attributes bode well for investors, and now McKesson has a trailing 12 month EPS of $8.26 and with a current price of $179 this translates into a P/E of 21.7. This is an attractive P/E given its shareholder-friendly capital return plan via dividends and share buybacks along with its growth.

McKesson Is Driving Growth Via Acquisitions And Partnerships

MCK recently acquired the pharmaceutical distribution division of UDG Healthcare plc for €408 million in cash. This acquisition will add a leader in pharmaceutical distribution across the Republic of Ireland and Northern Ireland to McKesson's European business. This acquisition is in addition to the recent announcement that MCK also acquired 281 pharmacies operated by Sainsbury's in the United Kingdom. These two acquisitions, once fully integrated will boost both top and bottom line revenue while geographically expanding its footprint across the Europe particularly in Ireland and the United Kingdom. The company expects the transaction to add approximately 10-14 cents to EPS in 2016 while having more of a positive impact in subsequent years. MCK also announced the signing of a five-year distribution agreement with Albertsons to include the sourcing and distribution of both branded and generic pharmaceuticals, commencing on April 1, 2016. As part of the agreement, Albertsons' network of nearly 1,700 pharmacies in their 2,200 stores across the country will benefit from the scale and strength of McKesson's generics program and daily direct-to-store service model for pharmaceutical products. This distribution agreement between MCK and Albertsons will extend through April 2021. Taken together, MCK is growing its business organically and via strategic acquisitions and partnerships to drive shareholder value and growth now and into the future.

Growing Healthcare And Prescription Drug Forecasts As A Catalyst For McKesson 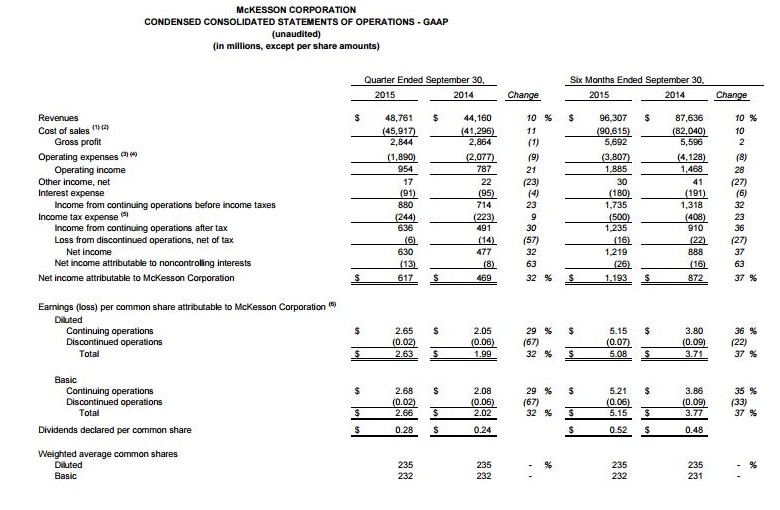 In addition to growing revenues and profits, MCK offers a backdrop of dividend payouts along with a share repurchase program. MCK has increased its quarterly dividend payout by nearly 360% over the past ten years from $0.06 to $0.28 per quarter. This translates into a 0.60% yield based on its current price (Figure 3). 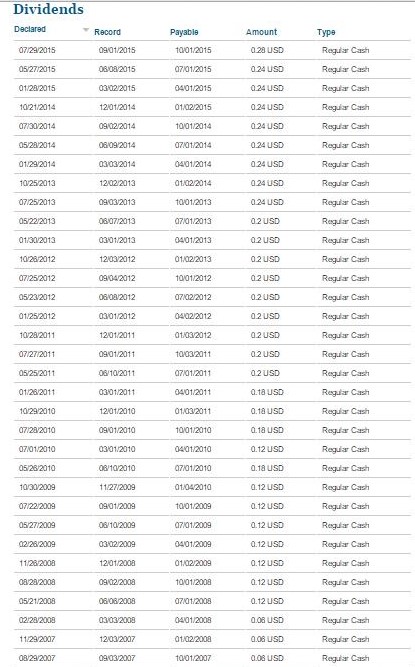 MCK currently has a new share repurchase program that was approved and earmarked $2 billion to buy back and retire shares. This would allow the company to remove over 11 million shares from the open market or 4.5% of outstanding shares. This newly approved share repurchase program is very aggressive and a great way to return capital to shareholders while the price is suppressed. Taken together, capital is being deployed in a variety of ways via acquisitions, dividends and share repurchases to reward shareholders.

Over the past five years, MCK has outperformed the Dow Jones by 117% on the cumulative basis, and this 3-fold out-performance is depicted below (Figure 4). Considering all the future catalysts for MCK moving into the future, I strongly feel that the stock will continue to outperform the market by a wide margin. 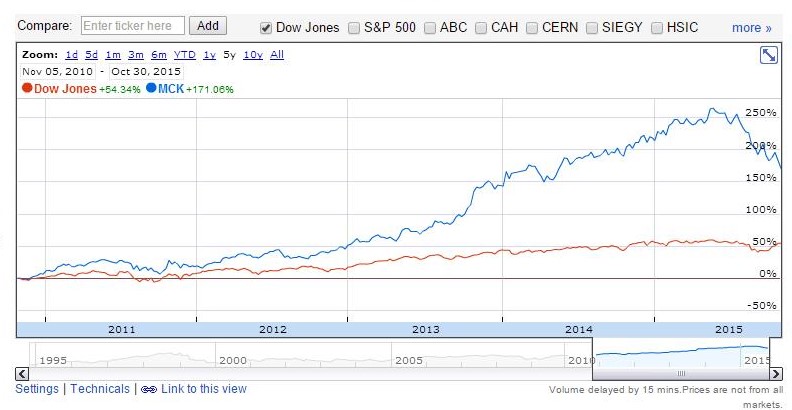 MCK is currently priced at ~$180 and per Fidelity sports a P/E ratio of 21, the price per share divided by trailing 12-month earnings per share. The P/E is currently above the historical P/E average of 18 however its in-line with industry peers CVS Health and Cardinal Health's P/E. It's noteworthy to point that when factoring in future growth via the PEG ratio ((P/E)/(Future Annual EPS Growth), MCK boasts a PEG of 1.38. This value indicates that investors are paying a premium of 1.38 for future growth. As a general rule of thumb, a PEG greater than two may indicate that the stock is overvalued.

The PEG ratio is based on a 5-year outlook. Since the PEG is currently at 1.38, and it's calculated by ((P/E)/Future Annual EPS Growth), we can back-calculate the growth rate.

These calculations do not factor in reinvested dividends or the impact of share buybacks. If one is to reinvest his or her dividends, this will have a positive impact on overall returns. In addition to the reinvested dividends, as MCK buys back more and more shares to remove these shares from the open market this will also have a positive impact on EPS and thus share price. MCK should conservatively remove 4% of its shares over the coming years assuming demand does not change while the supply decreases. Taking these two additional factors into play I predict MCK will boast a share price north of $300.

Taken together, MCK is attractive at these levels from a technical perspective provided a long-term horizon. I believe that the 15.7% EPS growth rate is reasonable considering the most recent 3-year growth rate was greater than 10%. Additionally, the 12-month target price determined by Yahoo Finance is currently at $258 per share. As you can see, there's plenty of upside in this stock given a long-term perspective. With latest acquisitions and partnerships, the share price deduced from my exercise above appears to be aggressive. I would feel comfortable with a 5-year stock price outlook in the range of the low to mid $300 level.

MCK is well-positioned for future growth and success in the growing healthcare space. MCK has been highly acquisitive, growing dividends over time and buying back its shares to drive shareholder value. Its major acquisitions and partnerships via UDG Healthcare plc, Sainsbury's pharmacies and Albertsons position MCK to continue its strong performance and competitiveness in the marketplace. The company does not shy away from deploying capital to acquire other assets to drive growth into the future. In addition to their acquisitive mindset, MCK also offers the backdrop of dividends and an aggressive share repurchases to add value to shareholders. On a technical basis, MCK appears to be undervalued based on its growth and future earnings as measured by its PEG ratio.

Disclosure: The author currently holds shares of MCK and is long MCK. The author has no business relationship with any companies mentioned in this article. He is not a professional financial advisor or tax professional. This article reflects his own opinions. This article is not intended to be a recommendation to buy or sell any stock or ETF mentioned. Kiedrowski is an individual investor who analyzes investment strategies and disseminates analyses. Kiedrowski encourages all investors to conduct their own research and due diligence prior to investing. Please feel free to comment and provide feedback, the author values all responses.