What will oil prices be when the U.S. government begins selling tens of millions of barrels of oil from its Strategic Petroleum Reserve (SPR) in 2018?

The House passed a federal budget on Wednesday – which is reportedly on its way to likely Senate passage and Presidential signature – calling for the government to sell at least 58 million barrels of oil from the SPR over an 8-year period beginning in 2018. The SPR currently holds about 695 million barrels in 4 sites along the Gulf of Mexico coast. Per the budget bill, the U.S. may sell up to an additional $2 billion dollars’ worth of oil from the reserve to build new pipelines and otherwise modernize infrastructure. That program would represent an incremental 43.5 million barrels based on today’s prices, bringing the total number of barrels to be sold up to a possible 101.5 million. At today’s rates, that could add about $4.7 billion into the US Treasury.

What if 2018 oil prices are much higher or much lower than today’s $46 level? If the government can sell its oil for an average of, say, $80 per barrel, Treasury could take in about $6.65 billion instead of $4.7 billion. We’d all like to hope at least that the Treasury can maximize its profits, right? Through shrewd timing on its buying and selling activities? (Yeah, right). Okay, maybe government might not be any wiser than anyone else when it comes to timing the markets.

But what if Goldman Sachs’ worst-case scenario comes to pass, with oil in the $20s? Or even if oil stays in the $40s and $50s for an extended period, as the majority of forecasters presume? The government won’t exactly be “selling high.”

Did the government buy low?

According to Bloomberg, the Energy Department says the U.S. paid about $29.70 a barrel, on average, for the oil in the SPR. Bloomberg continues: “After adjusting for inflation and other items, the average cost rises to $74 a barrel, according to ClearView Energy Partners, a Washington-based energy research firm. On Tuesday, West Texas Intermediate, the U.S. oil benchmark, traded at less than $44 a barrel.”

Will the government sell high?

As taxpayers – and also as investors – we’d love to know where oil prices will be throughout that period.

Goldman Sachs, of course, is out with a much-publicized scenario projecting low oil prices for the next 15 years. Goldman’s “New Oil Order” website features its Global Head of Commodities Research, Jeff Currie making this visionary statement:

“The oil market today is experiencing a significant transformation into a new paradigm. We use the term ‘New Oil Order’….

“The oil production process with shale… has turned oil production into a standard manufacturing process…. You can dial it up and dial it down in very short order….

“And the demand (side) has changed tremendously with the United States approaching energy independence…. Now the US is what we like to call ‘baseload’ demand, so the margin of adjustment is happening in places like China, India, and other parts of the world.

“The third component… (is that) OPEC has lost much of its pricing power. Today, because of the very flat supply curve, if OPEC adds oil onto the market or takes oil from the market, it doesn’t have a significant impact as it did previously.”

Currie goes on to explain that because producers around the world have become much more flexible than in the past – in terms of having the ability to quickly dial up or dial down production, quickly change cost structures, etc. – the impact on oil prices is that they may remain both relatively low and relatively less volatile than in the past. More like the boring paper-clip manufacturing market, to cite Currie’s analogy.

Lower oil prices and lower volatility in the future?

Do you agree with Currie’s assessment of lower prices and lower volatility in the future?

For what it’s worth, Currie has had an impressive October in terms of correctly prognosticating oil prices – if that’s any indication of how firmly he has his finger on the pulse of the market.

To illustrate, let’s do a little exercise:

When WTI crude spiked above $45 and $50 the 1st 5 days or so of this month, rising alongside the stock market in a powerful, “risk-on” stock-market surge, which of these scenarios would you have predicted:

Currie told Bloomberg on October 9th that oil’s rally wouldn’t last even if the stock market’s rally did. So far, he’s been proven to be exactly correct. The chart below shows a few key points about the correlation between stocks (red line) and oil (blue line) over the last couple months. 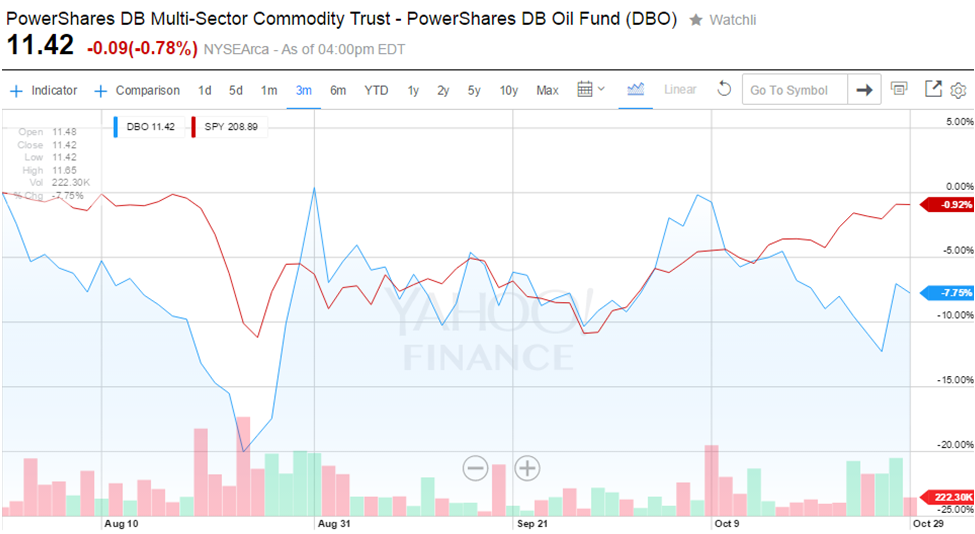 First, notice how at the end of August, both stock and oil prices shot upward from their respective low points – and observe that oil’s price rebound was sharper than that of stocks.

Second, observe the same phenomenon occurring in the 1st few days of October. Again, oil’s rally was sharper than the stock market’s rally, in a “risk-on,” V-shaped spike just like at the end of August.

Finally, as Currie correctly surmised, the “risk-on” attitude for oil would subside, even if investors continued bidding up stocks. So far, that’s exactly what’s happened. Again, Currie explains the cause of oil’s on-again-off-again behavior as stemming primarily from the new supply dynamics that make oil production much like traditional manufacturing in terms of flexible processes.

Given that compelling argument for low oil prices for an extended time, not to mention (I would add) the continued emergence of alternative energy technologies, perhaps it’s safe to say the government will be selling low when it begins its program to raise cash from its SPR in 2018.

But no, nothing is ever a safe bet when it comes to predicting oil prices – particularly over a period as long as the next 10 years.

Or, stated another way, the only safe bet is that there’s no safe bet. Goldman’s Currie has asserted his analysis for the next 15 years. But I’m sure he reserves the right to adjust and modify.

In my opinion, no, the government’s planned SPR sales (should the bill become enacted into law) will not impact oil prices meaningfully. For a little perspective, the bill calls for the government to sell 5 million barrels in 2018. Global oil consumption is about 93 million barrels per day. And by the time we reach 2018, all this will have long been “priced into” oil futures, as it’s widely known several years in advance.

Furthermore, Bloomberg reports other countries – including China, India, and others – are still buyers of oil, as they add to their reserves. The International Energy Agency (IEA) estimates that China has already stockpiled 200 million barrels and will add nearly 20 million more this year. Beijing plans to increase the size of its reserve to 500 million by 2020. Germany, Japan, South Korea, France, Spain, Italy and other big importers also have their own strategic oil reserves.

For the record, Friday’s Wall Street Journal reports a survey of 13 investment banks, whose consensus is roughly $54 WTI crude prices in 2016. The WSJ continues: “Many of the same banks were predicting $70 a barrel in 2016 just a few months ago. Major oil producers like Saudi Arabia and Russia are still pumping at near-record levels, and demand growth is expected to weaken as China’s economy slows.”

Many experts – including T. Boone Pickens and strategists from some of the major investment houses – still predict $70 and $80 per barrel oil in the near future. Interesting how all these people are smart, experienced folks, with access to the very same data, and yet they come up with widely varying forecasts.

Obviously, oil prices have a way of surprising everyone on a frequent basis. No one knows or can predict what will happen. And even if we did, there’s always the possibility of a wild card. Heck, maybe Russia – in an effort to help its own oil-dependent economy – will intentionally (?) create so much havoc in the Middle East that oil prices begin to once again reflect a steep geopolitical risk premium. Or maybe a natural disaster will wipe out a big chunk of supply somewhere in the world. For that matter, should a spike occur for any reason, maybe the US government will look brilliant when it begins selling oil from its SPR at elevated prices.

As for now, it’s all about supply and demand. And supply continues to outstrip demand. For your easy reference, here’s Bloomberg’s report of the most recent supply & demand data:

“U.S. oil consumption though July of this year was 2.7 percent higher than consumption in the first seven months of 2014. Moreover, despite continuing layoffs in the shale fields, U.S. oil output through July was 11.5 percent higher than output in the first seven months of 2014, a report this week from the Energy Information Administration showed.”

Disclosure: At the time of post publication did not own any stock mentioned. This article is the opinion of the contributor themselves. The above is a matter of opinion provided for general information purposes only and is not intended as investment advice. This contributor is not receiving compensation (other than from INO.com) for their opinion.

One thought on “Government Sells Low”