Unless you've been incommunicado this past week, you've surely noticed that the FX arena has been dominated by one trade. That, of course, is short Sterling, because Britain appears on the verge of leaving the European Union (EU).

The black swan event that brought about this situation was the surprise announcement by Boris Johnson, the incumbent Mayor of London. Johnson, a rising star of the Tories, is campaigning for Britain to leave the EU. That, of course, was a bit of a game changer. Investors got spooked by the thought of the financial Armageddon that could be visited upon Britain if a Brexit (British Exit) does occur.

Luckily, such panic creates an ideal situation for the rational investor. It's time to exploit and buy the Sterling low and sell it high later on when Brexit fears fade.

Why A Brexit Is Unlikely

One might presume that investors are thinking rationally. After all, if a political heavyweight like Boris Johnson supports Brexit there must be a strong base for it, right? The fact is there's not.

Eventually, it won't matter which politician is campaigning for a Brexit. Britain's citizens must be in distress. They must believe they have no other option except to risk a Brexit and possible financial catastrophe. And that is simply not the case.

Most of the British business community, from small businesses to corporates, depend on Britain being part of the European Union. Voting against the status quo in the upcoming referendum will be the equivalent of shooting one's own foot. Either they employ immigrants from Eastern Europe to operate their business, restaurants, etc., or they export to the EU. In fact, the majority of clients from London's banking sector come from the European Union.

All of that is in jeopardy if Britain chooses a Brexit and that is why it's simply not logical. Unemployment is low, growth is stable and overall the UK is doing fine. This is not the typical Greece-like cauldron that can cook a Brexit. Britons are just not desperate enough. Prime Minister David Cameron's compromise of negotiating a better deal is much more appealing, even without aggressive campaigning.

In fact, one does not have to go too far back to draw a comparison. Scotland, despite the high appeal of leaving the UK, last year voted to stay and avoid the risk of a financial meltdown. And that is exactly the same scenario we are facing now. Ultimately, logic will prevail.

Taking a closer look, we can see the Pound Sterling looks strong as compared to most peers, e.g. the Yen and the Euro (but not the Dollar). Growth is at an annual pace of 1.9%, unemployment is at 5.1%, and despite low inflation, wages are on the rise. All of which means that when the panic fades the FX market will return to price the Sterling for its fundamentals. That, of course, means much higher than its current lows, which presents a convenient opportunity to buy the Sterling on the dip.

However, buying on the dip (in our case, the GBP/JPY) doesn't mean timing your entry is immaterial. One possible way is to wait for a level of support to emerge. In this way, we increase our chances of riding the rebound back above 170 rather than having to catch a falling knife. In other words, the prudent Sterling buyer must wait for the panic to ease but enter before the appetite for Sterling resumes in full throttle. 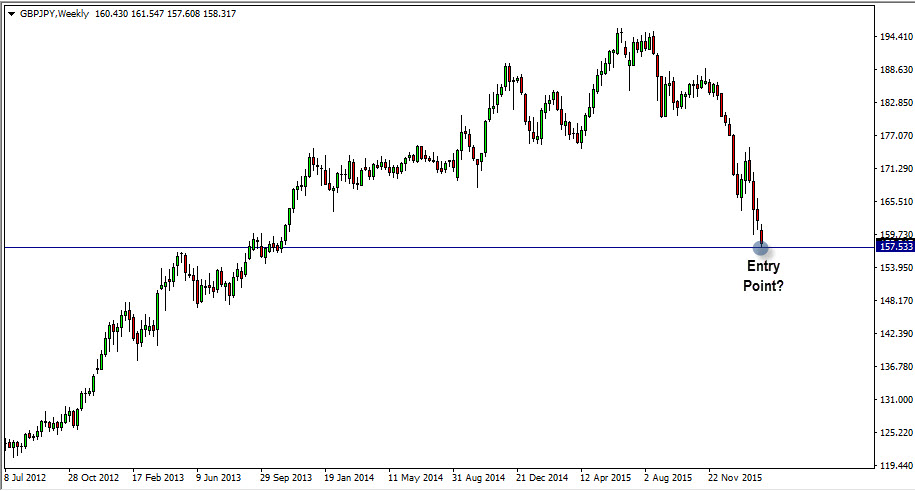 11 thoughts on “Buy The Sterling On Brexit Fears”