Today is a historic day in World financial history, which will be recorded in our memory forever! And it was a long and sleepless night all over the world as financial markets were frozen in agonizing suspense.

We should admit that Britons are firm and consecutive in pursuing their goal of independence. Almost a quarter century ago, they decided to withdraw their currency from the European Exchange Rate Mechanism (ERM) and they didn’t turn off their road yesterday on the final referendum.

Bookies and analysts got it all wrong as they forecasted the win of the "STAY” option, but more and more we have witnessed that all efforts to calculate human emotions and perceptions fail. The economic consequences for Brexit are harmful to the UK in a short term, but they still voted to leave. People are irrational in their behavior and the realization of this fact would bring the dramatic changes in the economic science in the future. END_OF_DOCUMENT_TOKEN_TO_BE_REPLACED

Unless you've been incommunicado this past week, you've surely noticed that the FX arena has been dominated by one trade. That, of course, is short Sterling, because Britain appears on the verge of leaving the European Union (EU).

The black swan event that brought about this situation was the surprise announcement by Boris Johnson, the incumbent Mayor of London. Johnson, a rising star of the Tories, is campaigning for Britain to leave the EU. That, of course, was a bit of a game changer. Investors got spooked by the thought of the financial Armageddon that could be visited upon Britain if a Brexit (British Exit) does occur.

Luckily, such panic creates an ideal situation for the rational investor. It's time to exploit and buy the Sterling low and sell it high later on when Brexit fears fade. END_OF_DOCUMENT_TOKEN_TO_BE_REPLACED

A black swan event is a metaphor that describes an event that comes as a surprise and has major consequences.

Today, such an event occurred causing the Swiss franc to soar as much as 30% and gold to jump to 4-month highs in chaotic trading after The Swiss National Bank (SNB) abandoned the cap on the currency's value against the euro. 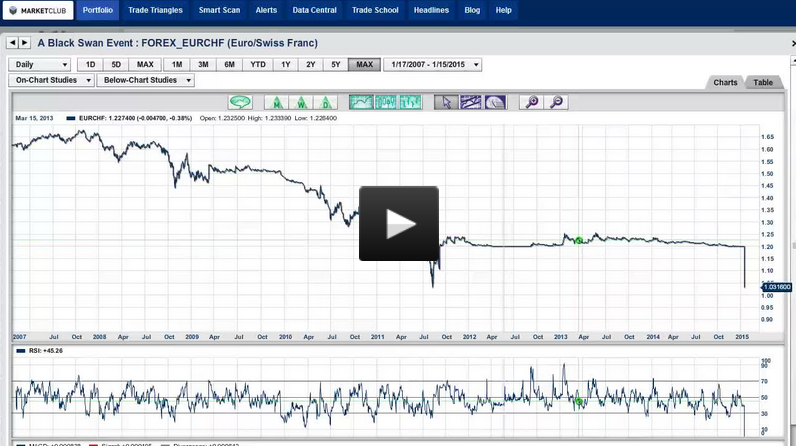 This move could well begin the demise of the euro that was cobbled together some 15 years ago. Personally, I am surprised to this day that this currency has survived as long as it has. The disparity between the work ethic of a country like Germany versus Greece is a joke - yet that is what the euro represents.

A Flight To Quality

As the Russian ruble continues to lose buying power, money is flowing into Switzerland from that country. I remember when I lived in Switzerland, flights used to arrive with passengers whose suitcases were stuffed full of illegal money. Make no mistake about it, this move by the Swiss National Bank is a game changer. END_OF_DOCUMENT_TOKEN_TO_BE_REPLACED

Many readers are already well aware that the US government is essentially unique—and not in a good way—in how it treats its citizens living and working in foreign countries. No other country in the developed world imposes and effectively enforces as many burdens on its citizens abroad (and those who would do business with them) as does the US government.

Whether it is filing and paying taxes to both a foreign government and the US government, the reporting of foreign financial assets (FBAR and Form 8938), or saddling foreign financial institutions with extra compliance costs for dealing with US citizens (FATCA), among others, the root cause of these burdens is a system of citizenship-based taxation (CBT). END_OF_DOCUMENT_TOKEN_TO_BE_REPLACED