Today I would like to share with you an analysis of precious metals ETFs. The goal of the study is to identify the correlation of price moves in both gold and silver with the demand for their ETF shares, represented by an appropriate precious metals holdings change. Below the chart you will read some interesting findings. 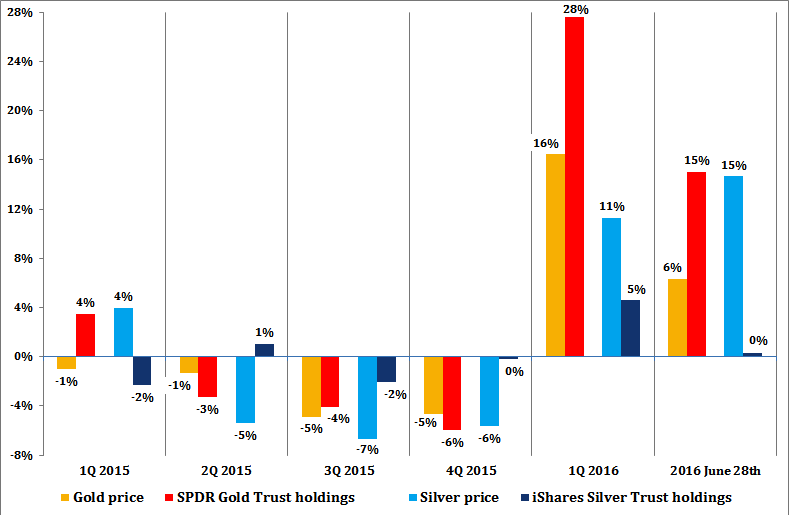 In the first quarter of the last year, we can see that investors were betting on a bottoming gold price with a 4% rise in SPDR Gold Trust (PACF:GLD) holdings despite the 1% fall in price. It’s interesting that at the same period, investors, on the contrary, cut their silver ETF holdings despite the rising silver price; it looks like they used the ‘sell silver on spike’ approach to gain on metals correlation. It’s amazing! But they were right shorting silver as it fell in three consecutive periods exceeding gold’s losing streak.

Gold bugs in their turn were disappointed and started to off-load gold holdings for the rest of 2015 amid a new low shaped at the start of 3Q 2015. And as I once said using term ‘overreaction,' investors have cut more holdings in percentage than did the price, -13% vs. -11%. I guess we can witness here the notorious situation when the fear beats the greed.

In the first quarter of this year when the gold bulls finally took the ball, we can see the dramatic change in investors’ behavior. They’ve started to buy gold ETF shares in huge amounts. And it added to the strong price growth of the yellow metal to 16% in the first quarter of 2016 and for 6% in the current quarter.

One of the most interesting findings of the study is the confirmation of the special status of the gold in a system of values of investors. Almost every time the change in GLD holdings overreacts to the change in the price of the top metal; either on the downside or on the upside the ETF holdings’ change is greater than the price delta, especially this year. Investors are very active in the gold ETF.

Despite that the price of silver was a very volatile and exceeded the gold changes the iShares Silver Trust (PACF:SLV) holdings were dead flat. Only the robust jump for 11% in the 1Q 2016 could have animated the demand for silver ETF, which made up decent 5% growth. But in the current quarter, SLV was dead again, and even the highest silver price growth of 15% couldn’t start the heartbeat.

And here is another finding - it looks like silver is still a 'disfavored child' among ETF investors as a year ago. The cumulative price growth of Silver is equal to +12% compared to only laughable +1% growth in SLV holdings. Gold advanced less than silver for 11%, but GLD gained an unbelievable 33% in holdings.

The dynamics of GLD tracks the price of gold very well and tends to overreaction waves very often. When the market is biased bullish in gold, the demand for GLD grows in a geometric progression compared to neck-to-neck bearish price behavior between gold price and holdings change. This year’s dynamics looks unprecedented as the ETF demand almost caught up with weighty jewelry demand, and this is not a common case for the gold market.

It is obvious that the demand for silver doesn’t come through ETF as the SLV holdings have a very weak correlation with the price of silver and shows a flat dynamics all the way. It’s not about the silver at all. Jewelry and the industrial demand are still holding the reins of the market.